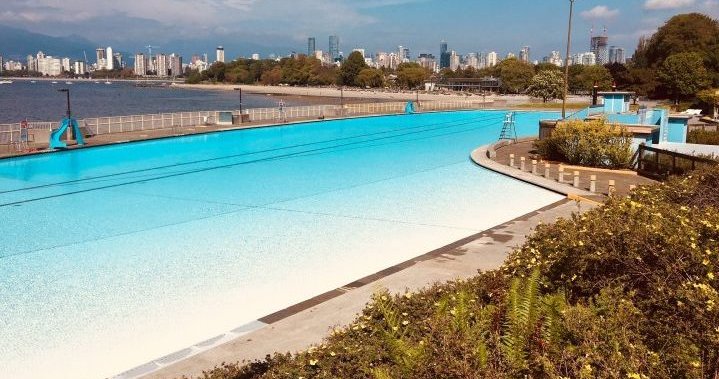 After crews raced to get the Kitsilano Pool in Vancouver open for the long BC Day weekend, the facility was forced to cut service due to staffing issues.

The Vancouver Park Board said Monday that both Kits Pool and Second Beach’s outdoor pool would not allow drop-in swimmers due to “ongoing challenges with the availability of lifeguards.”

Reservations for the 5:45 PM at Kits and 6:00 PM on Second Beach timeslots were also cancelled.

Sunset Beach was also without lifeguard staff on Monday.

Additional updates due to continued lack of lifeguard availability:

There is no designated lifeguard at Sunset Beach today. English Bay is the closest beach with a supervised swimming area.

The park board did not make anyone available for an on-camera interview Monday, but issued a statement saying that the “ongoing shortage of lifeguard personnel has impacted services and facility operations not only in Vancouver, but internationally.

“Pool closures and program cancellations are always a last resort, but unlike other industries that face staff shortages, our facilities cannot operate without the presence of lifeguards to maintain a safe environment for swimmers,” it said.

“Beach users are reminded that designated swimming areas supervised by a lifeguard are marked with the red and yellow beach flags when staff are on duty.”

The service cut came after the board closed the pool to all swimmers more than three hours earlier on Sunday due to a shortage of lifeguards.

0:42
Vancouver Park Board plans to reopen for Kits Pool in August

In that case, the facility reimbursed swimmers who booked evening time slots.

Dale Miller, executive director of the BC/Yukon branch of the Lifesaving Society, told Global News that the city was not alone in dealing with a shortage of qualified personnel.

“This isn’t just a Vancouver situation — it’s all over Canada, in fact worldwide,” he said.

“We’ve seen this happen all over the world and I think it’s only a matter of two years of lack of access to courses to train lifeguards, so there’s that two-year cohort of potential lifeguards that we’ve lost, so we’re busy catching up.”

Miller said lifeguard training was in high demand and he hoped the shortage would ease within six months to a year.

In an interview last week, Donnie Rosa, general manager of the park’s board, told Global News she didn’t expect ocean guards to be drawn to staff pools.

“There are a lot of intricacies when it comes to what day it is, what the weather is like, what the tide is, so maybe we need to move people – but I don’t see us taking (life)guards off beaches to open swimming pools,” said Rose.

Park officials had initially said the facility might not reopen at all this summer, but staff determined in June that its structural integrity had not been compromised and that it could be opened with minor repairs.

More in-depth repairs are planned for after the pool closes for the season on September 5.