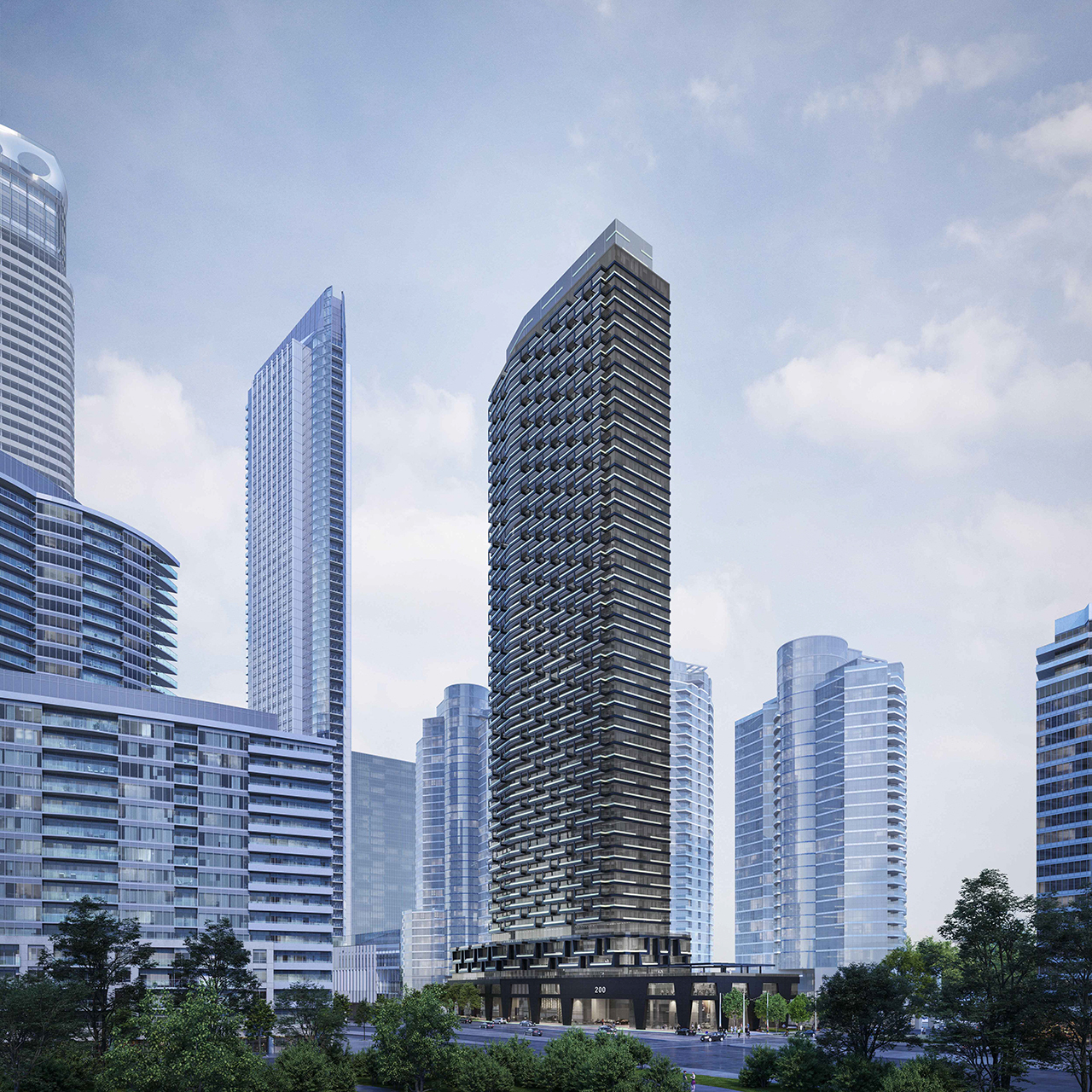 Lifetime Developments and Diamond Corp. have submitted a refined design for their 0.5-acre site located at 200 Queens Quay West, on the northern edge of Toronto’s Harbourfront and adjacent to the Gardiner Expressway. The new design brings refinements to plans for a 59-story tower designed by Wallman Architects at the southeast corner of Lower Simcoe and Harbor streets.

New 59-storey design for 200 Queens Quay W, image of submission to the city

Currently home to a multi-storey ‘Green P’ above-ground parking structure, an initial application for zoning amendments to the site was submitted to the city in June 2020, at that time seeking two towers of 41 and 71 floors (see below) with a total GFA of 96,009 m². A POPS (Privately Owned Public-accessible Space) was proposed at the southeast corner of Harbor and Lower Simcoe.

The developers presented the proposal both at a community meeting and to the Waterfront Design Review Panel (WDRP) in January 2021. In addition to feedback from these meetings, the review process with city staff and key stakeholders generated more comments resulting in an evolved design.

An all-new 2.0 version in gray and silver for a now single 59-story tower was brought to the community in February 2022, as was the WDRP, where the new mass was better received. Since then, further refinements have been made, mainly to the architectural expression of the exterior, while the mass and components of the overall 2.0 design have remained essentially the same.

5-storey stage with outdoor space of new design, image of submission to the city

The 2.0 version has been recommended by City Planning for approval at the June meeting of the Toronto East York Community Council, scheduled to be discussed at 10 a.m. or shortly after on June 30. If it succeeds there, which is likely, it will go to Toronto City Council at its July 2022 meeting, to seek approval.

This version proposes a GFA of 60,563 m² and comprises 1,003 residential units, with a mix of one, two and three bedroom suites. 10% of the gross living space within the development is proposed as new affordable rental housing. The ground floor would contain a building lobby and a street-level shop, while the second floor would house an interior space and bicycle shed. Underground, a four-storey garage could accommodate both residential and commercial parking. The parking levels are accessible via an internal ramp.

Main level of the proposed building, image of submission to the city

The proposal also includes the inauguration of a 500 m² public park on the west side of the site, contributing to the growing park system of the Central Harbourfront. The public park, designed by DTAH, would serve as a ‘green link’ in the connection from Roundhouse Park to the Toronto waterfront, creating an active and accessible space.

Proximity of the site to nearby green spaces, image of submission to the city

UrbanToronto will continue to follow updates to this development, but in the meantime you can learn more from our database file for the project, linked below. If you’d like, you can join the conversation in the associated Project Forum thread, or leave a comment in the space provided on this page.