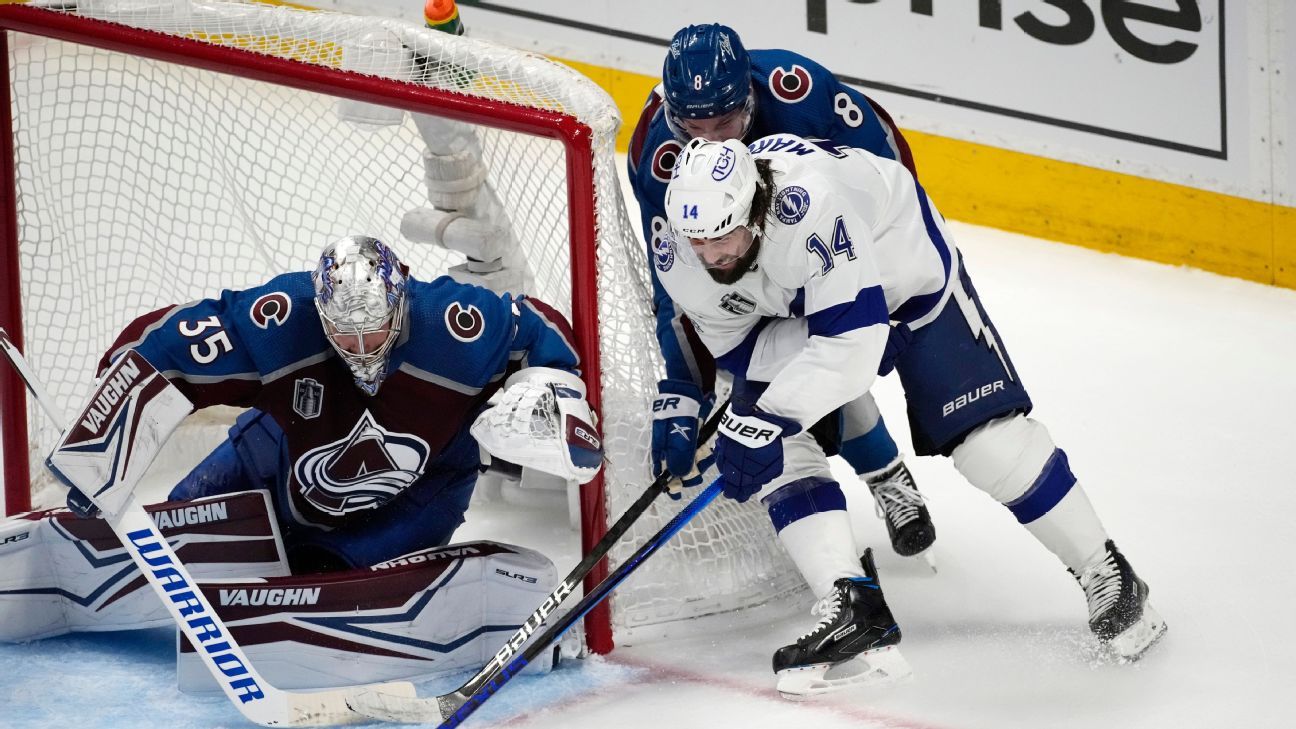 The Stanley Cup is in the building. The Colorado Avalanche led the best-of-seven series with the Tampa Bay Lightning, 3-1. The Avs could close out the series and keep the Cup in the building in Friday’s Game 5.

Game 4, which ended in a 3-2 Colorado overtime win, was not without controversy. Video replay appeared to show Colorado had too many men on the ice as Nazem Kadri scored the game winner.

Now the two-time defending champion Lightning is on the ropes and the Avalanche are on the cusp of winning their first cup since 2001.

These are the best scenes from Game 5.

Ondrej Palat isn’t ready to give up just yet, as he silenced the Colorado crowd late in the third with a go-ahead goal.

Avs tie it up

A horrible stoppage for the Lightning, as one sneaks through Vasilevskiy to tie the game 2-2. Cale Makar is the one who scored the goal.

Cale Makar couldn’t help but look to the sky.

Ondrej Palat had just skated over his stick and fell onto the ice, which was called a tripping penalty on Makar. The matches were already 4-on-4 after JT Compher was penalized for holding the stick too late and after Alex Killorn had already been called up for a hold.

Nikita Kucherov scored on the ensuing Lightning power play, which was only Tampa Bay’s second goal with the man advantage in the cup final.

Since Makar is one of Colorado’s best penalty killers, it wasn’t a totally shocking development.

It was one of the few no-calls that didn’t favor Colorado in the second. Pat Maroon was not penalized for dropping Nathan MacKinnon on the ice and a trip to Tampa Bay was not called for in the eyes of the official.

After that, there was no delay in the game call when Nick Paul shot the puck out of play on a shorthanded clearing attempt.

The margin for error in the game has been paper thin at equal strength so far, so the battle between special teams has been – and will continue to be – prominent. — Kristen Shilton

No-touch icing has its advantages, such as preventing catastrophic collisions in the end boards. It also has its drawbacks, as the linesman makes a judgment about which player would theoretically hit the puck first during a chase between opponents. The Lightning was burned by the latter in the second period, as it certainly looked like Nick Paul was in position to touch the puck, but the linesman’s whistle was the icing on the cake. That led to a faceoff on the other side of the ice, which then led to Valeri Nichushkin’s equalizing goal.

But the officials take and they give. With the teams playing 4-on-4 after equal holding penalties, Cale Makar was handed a rather misleading tripping penalty to set up a 4-on-3 power play. If the Lightning ever scored on the men’s advantage, it would be here, and Nikita Kucherov netted his eighth of the playoffs at 8:10. It was only the Lightning’s second power play goal in 17 attempts in this series.

The icing aside, the Lightning got the advantage of officiating in Game 5. Which conspiracy theory wins: that the NHL “wants” a Game 6 or that Jon Cooper’s protest about there being too many men on the ice at the end missed from Game 4 affected the lead in Game 5?

In any case, the Lightning are 20 minutes away from keeping the three-peat alive. — Greg Wyshynski

The Lightning don’t want this series to end tonight, with Nikita Kucherov giving Tampa Bay another lead with a power play goal.

A bit of confusion in front of Lightning’s goal led to an Avalanche score, this time from Valeri Nichushkin.

The Lightning identified the first 10 minutes of Game 5 as absolutely crucial.

“They feed off those first 5-10 minutes and you have to really engage with your game. Because that’s when they start to gain momentum,” said coach Jon Cooper.

The good news for the Lightning was that unlike their first two games in Denver, they didn’t concede multiple goals midway through the opening period. The bad news is they spent 40% of those minutes on the power play and got away with nothing to show for, with just two shots on target.

The best news: they finally scored the first goal at 15:21 of the first period, as Jan Rutta defeated Darcy Kuemper neatly. In addition to a good first 10 minutes, the Lightning also talked about how getting a lead would allow them to get their game and chase Colorado a bit. Given Colorado’s stamina benefits at this point in the postseason, that’s essential. — Greg Wyshynski

Tampa Bay got two penalties in the first 10 minutes, forcing the Avalanche’s aggressive penalty kill to come up with quick answers. Colorado had a great run through all series and it continued as the Lightning dropped to 1-for-17 with the extra man in this cup final.

The Avalanche’s lone power play attempt off the frame generated some great looks at Andrei Vasilevskiy, but failed to beat the Big Cat.

While no one drew blood from power plays, a special team-heavy frame probably wasn’t the start anyone wanted for a potential Stanley Cup clinching game. There were obvious nerves on both sides with poor passing and poor shots. On a few occasions, the Avalanche were caught being too cute with the puck, on 5-on-5, and on the power play, which is a dangerous game to play against the opportunistic Lightning.

In this series, the first period has often been a sorting process before the going back and forth really starts. The pace picked up considerably in the last two minutes. Let’s see if that continues in the second. — Kristen Shilton

Another early lead for Tampa

A bit of a surprise goal from the Lightning, as Jan Rutta snuck one past Darcy Kuemper’s defence.

Tampa Bay had a very special cheer area for them in a raucous Ball Arena.

The Lightning has flown their full-time staff to Denver and they are a cheering section in Section 322. pic.twitter.com/t6lUr9be6Q

The Avalanche went with some stylish neon lighting looks for their walk to the arena, while the Lightning looked bright and optimistic despite their flaw.

Our own #ContentKing setting the tone. #GoAvsGo pic.twitter.com/u8pb70sqUW

In the area. #GoAvsGo pic.twitter.com/tAxPCZyhU8

The cup is equipped and ready

I’ll be in the building on Friday.