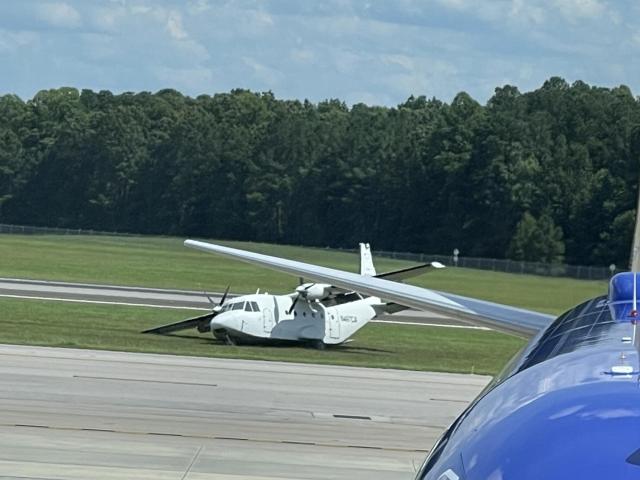 Fuquay-Varina, North Carolina – Authorities say they have found the body of a man who may have jumped or fallen from a plane before approaching Raleigh-Durham International Airport for an emergency landing after having problems with landing gear.

Late Friday night, police identified the man as 23-year-old Charles Hew Crooks, who was believed to be the copilot of the plane.

Crooks, who was not wearing a parachute, was found near Sunset Lake Road and Hilltop Needmore Road in a Fuquay-Varina neighborhood.

First responders from more than half a dozen agencies search the ground and air along the plane’s flight path.

“No precedent for this, leaned on training,” said one responder.

The crooks wore brown pants and a shirt with a logo on it, according to Darshan Patel, Wake County Emergency Management’s chief of operations.

A resident flagged officers searching the area after claiming to have “heard something in their backyard,” Patel said.

The search began around 2:30 p.m. near West Lake Middle School, but eventually shifted to the residential area in Fuquay-Varina. They found Crooks around 6:45 p.m., when officials said firefighters helped move his body to a place where it could be moved safely.

According to the FAA, two people were on board the plane when it took off. However, an RDU spokesperson told WRAL News that only the pilot was on board when he made his rough landing.

The pilot, whose name was not immediately released, was taken to Duke Hospital with minor injuries, RDU said.

A WRAL pilot captured video of the plane — a twin-engine turbo — sliding off the runway and into the grass at RDU as it landed.

Local police are assessing the plane’s flight path, radio traffic and are working with the FAA to determine what happened.

The aircraft, which is owned by SPORE LTD LLC., is a small aircraft for 10 people.

Video captured by a WRAL Sky 5 pilot shows the plane sliding off the runway, where it spins in a partial circle before coming to a stop, where multiple fire trucks and paramedics can be seen.

At the end of Friday, WRAL News received audio from the twin-engine turboprop pilot who asked air traffic control for help.

“Emergency, we have lost our right wheel”, said the pilot on the recording. “We want to speak to Raleigh and make an emergency landing at Raleigh.”

The airfield at RDU was temporarily closed until the scene was made safe.

“I saw a whole crowd of people looking out the window at the jet bridge and then saw that propeller plane on the grass behind the runway and some emergency vehicles,” said Simon Palmore, who witnessed the plane’s tumultuous landing and shared photos on Twitter. ,

Hermang Pathak, another witness, said RDU Airport had made an announcement that departures would not be affected.

A witness, who was on a plane orbiting RDU at the time, said the pilot delayed their landing and said there had been a “scare” at the airport.