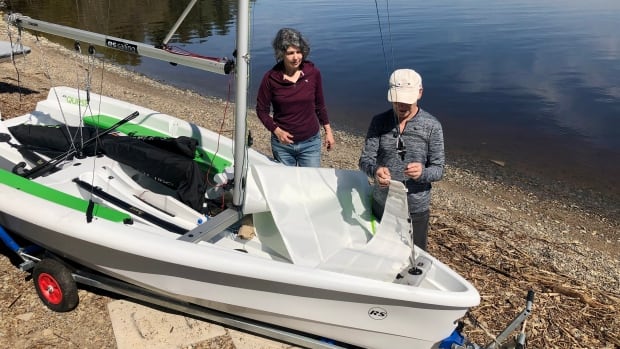 Deb McPhedran remembers exactly where she was when the lights went out at the Kanata Sailing Club – she and another sailor glided down the Ottawa River aboard one of the club’s catamarans, bound for Lac Deschênes.

It was July 2, 2018 and the city was baking under a relentless heat wave. That afternoon, Environment Canada has issued a thunderstorm warning†

A violent gust of wind suddenly capsized the sailboat. As the wind pushed them toward the Quebec side of the Ottawa River, McPhedran lay on top of the mast to prevent it from jumping up and becoming a lightning rod.

“Lightning isn’t good when you’re on the water,” she explained.

Help soon arrived (McPhedran, the sailing club’s deputy commodore, insists she could have gotten back to safety herself once the storm passed), but once safely back on shore, she noticed the storm also had several trees including a large pine that has supplied the water supply to the sailing club and its neighbor, the Ottawa River Canoe Club.

Both clubs rent their waterfront properties from the city of Ottawa.

Deb McPhedran, vice commodore at the Kanata Sailing Club, and Steve Harrington, the club’s harbor master, say living without power means they have limited access to their clubhouse and its amenities. 1:05

That was almost four years ago and they have been without power ever since.

That meant no lights in the clubhouse, no fridge or microwave to prepare meals, and with the electric pump out of order, the water now comes in plastic pitchers. There is also no electricity to charge power tools needed for the constant maintenance of the property.

“Wi-Fi would be nice too,” added McPhedran.

The club, which currently has about 100 members, is a non-profit and largely volunteer-run club. A family membership costs $655 and gives qualified sailors full use of the club’s fleet of lasers, bytes, catamarans and brand new RS Quests.

The initial estimate to power the two clubs was about $70,000, but it quickly climbed to $84,400 when the cost of new hydropiles skyrocketed.

City that occupies half

Together with its neighbor, the Kanata Sailing Club applied to the city’s capital grant program for half the cost. The grant was approved, leaving each club with a bill of just over $21,000.

In February, the sailing club launched an online fundraiser to cover the rest, and has since raised about half, thanks in part to donations from family members and suppliers.

That leaves just over $10,000 to be raised, nearly the cost of one of the club’s newest 14-foot sleigh rides.

“That’s a lot of money for a small volunteer club like this,” said Steve Harrington, the harbor master of the Kanata Sailing Club.

He explained that in addition to the piles, the necessary work consists of a new transformer and panels and the disconnection of old pipes. Lighting fixtures damaged when the power went out four years ago will have to be replaced, and the club hopes to make some electrical upgrades as well.

“It would be like installing a brand new service in a cottage you’re building somewhere that doesn’t have one, so it’s very expensive,” Harrington said.

In the meantime, members will continue to make do with a few solar powered lamps and flashlights after sunset. (Next door, the canoe club has also used a small solar plant and a few generators to keep the lights on, McPhedran said.)

However, the lack of power limits some activities, especially as the days get shorter in late summer.

“There’s still great sailing in September, the water is still warm, but the sun goes down at 5:30 or so, so you don’t get off the water until sunset, and then it’s all dark here, so it makes it much harder to deal with,” Harrington said.

McPhedran said the club has received a loan to restore power as soon as possible, but would prefer not to go into debt.

Ideally, she hopes work can begin after the busy summer season and the lights will come back on next spring.

“It’s best for the club, best for growing membership and making the majority of members comfortable,” McPhedran said. “We need power at the club, we need light.”