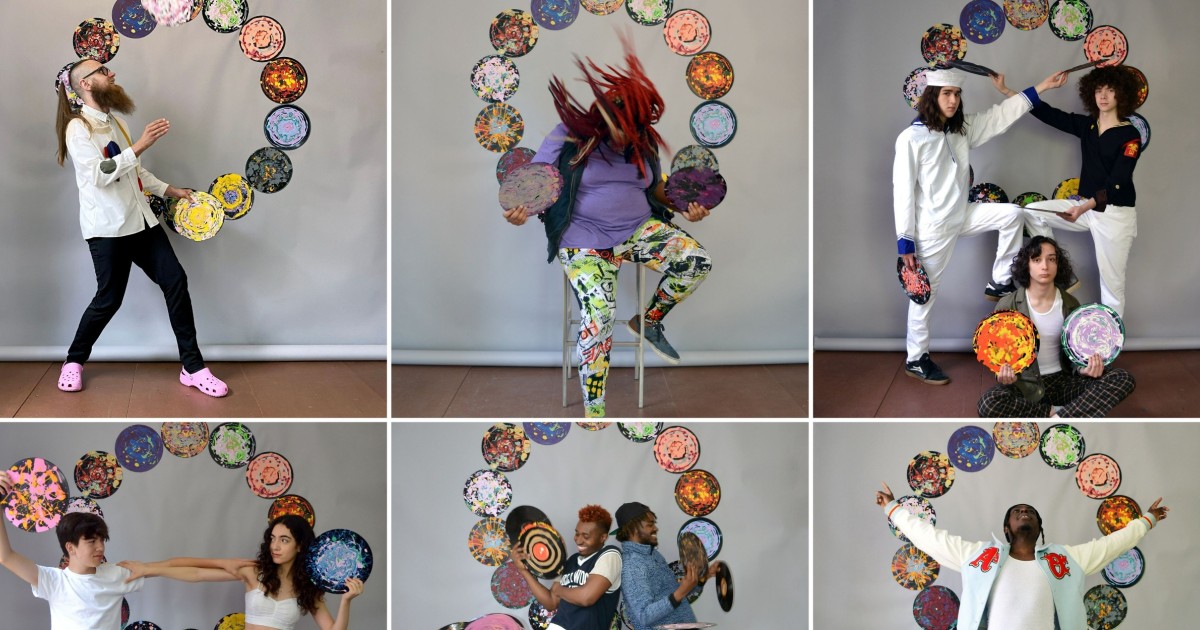 On a sweltering June morning at the Edgewater arts nonprofit 6018NorthChicago artist and dancer Hannah Santistevan picked up a pink and red paint-stained record player and began to move gracefully.

Santistevan posed for the camera, hoisting the plate high above her head and positioning it so that it almost blended into the background: a circle of 14 other vibrantly painted albums. The records evoke a sense of color and play, but also serve as an ever-expanding archive of a decade-long art project that will culminate later this month with a beachside concert and variety show.

The project is called Boulevard Dreamers and started in 2013 with artists and professors Kirsten Leenaars and Lise Haller Baggesen from the School of the Art Institute of Chicago. But this year — arguably the project’s final installation — it has grown in size, with the artists teaming up with community-focused art curator Tricia Van Eck for a one-day party-meets concert on June 25 that aims to “break the barriers of cultural segregation.” in Chicago,” in the words of Baggesen.

The performance menu includes post-punk and rap music, spoken word poetry, magic, theatre, a live zine reading and contemporary dance. The goal: to find diverse performance communities that wouldn’t normally intersect, Baggesen said, and — in a move that contradicts the usual headliner treatment — to show them off on an equal footing.

Leenaars and Baggesen have structured the event and the reward for their talent in such a way that all artists have an equal playing time, whether they are a seasoned artist or a novice. “Everyone gets a flat rate,” Baggesen said. “We are trying to make the podium a big equalizer where everyone gets these proverbial 15 minutes of fame. And to bring people out of these different bubbles.”

On the day of Santistevan’s photo shoot, Leenaars stood behind the camera and Baggesen arranged the lighting. They usually let Santstevan do her thing while she improvised dance, often shifting her balance between the feet and holding her arms out wide, emphasizing the record in her arms.

This story is part of our weekly “Free Summer” series, which highlights the best of free concerts, exhibitions, festivals and cultural events open to the public. Find the full guide here.

Leenaars and Baggesen have been organizing photoshoot portraits of all Boulevard Dreamers artists since 2013. Since then, each artist has been recorded in front of the same backdrop: the circle of colorful plates, simple but dynamic, allowing the talent to master.

The shoot is a simple, basic setup, but everyone performs like themselves,” said Baggeson, adding, “People are always putting it on edge.”

The photos serve as promotional material for the event. But for Leenaars and Baggesen, the images have more meaning: an installation, performance and archive project at the same time. Attendees at the 2022 event will be shown the portraits, which will be projected from a room on the first floor of the 6018North Building from 3 p.m. before walking to Lane Beach for the full show.

Sitting on the porch of 6018North, enjoying a light breeze, Leenaars flipped through her portfolio website, displaying portraits of past artists such as ChickenFat Klezmer Orchestra, Summer Tribble, Reborn and Jessica Campbell, with each image showing a distinct sense of personality and interpretation. illustrated .

Leenaars and Baggesen previously hosted Boulevard Dreamers in several Chicago locations, including the Museum of Contemporary Art, where they built a stage out of a cardboard box, and The Poetry Foundation, where they created a modular stage and then destroyed it.

This year, they decided to team up again with Van Eck, who had contacted them about creating a special project that would combine Boulevard Dreamers with Water Music on the Beach, a concert she’s curating on the shores of Lake Michigan. For Van Eck, who built a gallery in a Victorian Edgewater and is interested in the relationship between art and community, the beach acts as a community builder.

“You’ll see there are people sunbathing who had no interest or idea in listening to music, but then they come along. We expose people as you walk by, you see art,” said Van Eck.

Leenaars and Baggesen emphasize community in their Boulevard Dreamers project, making the collaboration a natural fit. Leenaars has partnered with Rogers Park-based nonprofit Circles & Ciphers, a restorative justice organization with a focus on hip-hop — and Uptown, all “neighborhoods that share the same beach,” says Van Eck. Shane Calvin of the group will perform on June 25.

Audiences can expect rows of seats in the sand and six plates flanking the stage “like big lollipops,” Baggesen said. “What we’re trying to do this time with a stage design is to frame it more in reality as the natural backdrop and unifying for the entire city of Chicago.”

The co-directors give the performers a lot of creative freedom for their performances. “We’re also hoping for that element of surprise, where we don’t even really know what’s going to happen, but just that it’s going to be awesome,” Baggesen said. The 30 or so performers include Fred Sasaki & family, Michael Zerang with Janet Bean and Tyler Damon, Kofi the Kid, LOUD BODIES Dance, Santistevan and others.

In the early days of Boulevard Dreamers, when it was a smaller-scale project, Leenaars and Baggesen paid the artists with their portraits. But starting in 2022, they’ll be paying $100 to each participant, aided by a grant from the Illinois Arts Council.

Even if on a larger scale, this year could be the last installation of Boulevard Dreamers, Leenaars and Baggesen said, given the logistical and administrative challenges of organizing the event. “We hope we can bring that magic,” Baggesen said of the couple’s potential swan song.

After that, in the true style of experimentation, it’s a gamble.

If you go: Water Music on the Beach: Boulevard Dreamers brings together the Boulevard Dreamers project by Leenaars and Baggesen and the founder of 6018North Tricia Van Eck’s Water Music on the Beach project on Saturday 25 June. Projections begin at 3:00 PM at 6018North (6018 N. Kenmore Ave.) before those in attendance are invited to walk to Lane Beach (5915 N. Sheridan Rd.) for the performance, less than 400 meters away. The event is free. Check out our summer guide for more great free summer cultural finds.

Isabella DeLeo is a freelance writer based in Chicago.