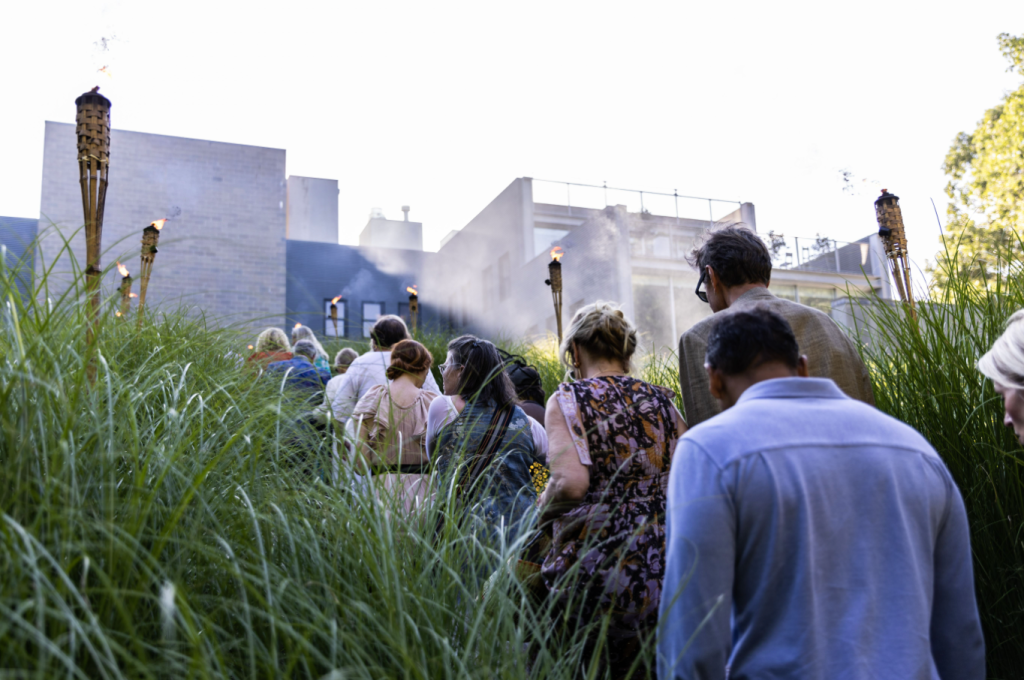 There was a whiff of occultism in the air as guests at the Watermill Center’s STAND Benefit walked in rows through the woods, on a path strewn with pine needles, surrounded on all sides by tiki torches and lined with performance works.

For the first piece, a man peeked his head out of a large egg sculpture and whispered, cackled and sang, “Welcome to the Watermill Center!” in a voice my companion described as “Minion-esque, but more sinister.” Statues of Liz Glynn stood in the center, separating the shooting crowd. The fire cast shadows on the finely worked faces that sprang from otherwise rough, elemental bodies. ghostly. We passed a grave hewn out of the meticulous lawn; inside a man wearing a headgear with twisting light bulbs. As we walked up the stairs to the actual Watermill Center the grounds opened up revealing a party in full swing.

The Watermill Center’s annual summer benefit is one of the Hamptons’ most anticipated summer events, unlike the sit-down dinner galas that mark the fundraising season for cultural institutions along the East End. Instead, the night is punctuated with performance works, music, and visual art exhibitions created by both resident and general artists. Behind the event – and indeed the entire institution – is Robert Wilson, the Center’s founder and artistic director.

Wilson has had a long and distinguished career as an experimental theater director. He is best known for the avant-garde opera Einstein on the beach, which he made in collaboration with composer Philip Glass and choreographer Lucinda Childs. The fruit of his success can be clearly seen in the Center, where his large collection is housed. A blend of folk art, furniture design, a theater production archive, and visual works by the likes of Canadian-American abstract painter Agnes Martin and American sculptor Richard Serra, the collection is unique and reflects a man of many preoccupations.

The center also hosts artists, writers, and academics to live, create, and work with the collection as part of the institution’s acclaimed artist residency program.

Last weekend’s celebration marked the 30th anniversary of the STAND Benefit, so Wilson crowned the evening with an exhibition of great personal importance: a presentation of work by Christopher Knowles.

“It’s been a dream of mine to showcase his work this way,” Wilson, 80, told ART newsas he sat down on a chair from which he could watch the comings and goings of the revelers. Wilson has been both patron and associate of Knowles since the artist was a child. Wilson weaved the poetry of Knowles Einstein on the beach and even cast him in the production as a teenager.

“I found him in a brain injury facility,” Wilson said, looking into the distance. ‘He’s a genius and I thought, why should he be ‘corrected’? He came to live with me.”

Knowles is thought to have suffered some sort of brain damage at birth and is considered autistic. Wilson first heard about him when a family friend gave him an audio work called Emily loves TV (c. 1970). The looping track — fueling the lifelong relationship between Wilson and Knowles — filled the exhibition space inside, adorned with Knowles’ visual works, including long reams of paper and a typewriter. Emily loves TV boomed with a hypnotic beat: “Emily loves the TV, Emily loves the TV, because she watches the TV, because she likes it.”

Emily loves TV set the tone for the rest of the evening’s offerings, which had a similar trance-like effect. In the distant forest, where the last evening light shone through a circle of trees, a musician strummed an electric guitar. Across the path was the Korean choreographer Taeyi Lim, who performed a work called Leave that included inspecting and handling a cloth ball and chain attached to her ankle. Deeper in the woods, a woman played a chimeric instrument, something between a trumpet and what appeared to be a Chinese one erhu, a two-stringed violin-like instrument. Down by the green lawn, where people drank rosé and pecked hors d’oeuvres and seafood stews, NiNi Dongnier, a choreographer who works between New York, Beijing and Vancouver, pushed and pulled a giant ball of fluorescent green wool, sometimes clashing with seated guests. in a kind of slow-motion train wreck that usually ended in lots of shutter clicks and quick grabs to save inverted drinks.

The benefit’s final performance broke the nighttime atmosphere of gentle whimsy with an unexpected climax. Japanese performance artist and artist-in-residence Tsubasa Kato presented a landmark work titled Manhattan go. The wooden sculpture, about 20 feet high, looked like a boat tucked tightly into a jetty, with lots of ropes at both ends. The intention was for the guests to help pull the ropes to turn the statue from a horizontal to a vertical position. Men in loafers and white trousers, and women who hadn’t worn heels, quickly picked up the ropes using the attached handles.

After a ten-second countdown, the partygoers waved and held the statue. The guests, now performers, continued to pull powerfully individually, but without group coordination. Kato ran around with a megaphone, urging guests to gather at the other end of the statue with orders to push and finally lift. Raymond Bulman, director of The Hole Gallery, used his prodigious height to get the thing off the ground.

Finally it began to lift miraculously, its enormous weight rose into the air. It staggered, for the tiniest moments, toward the crowd that had gone to such lengths to pull it toward them.

Fortunately, there was no bloodbath.