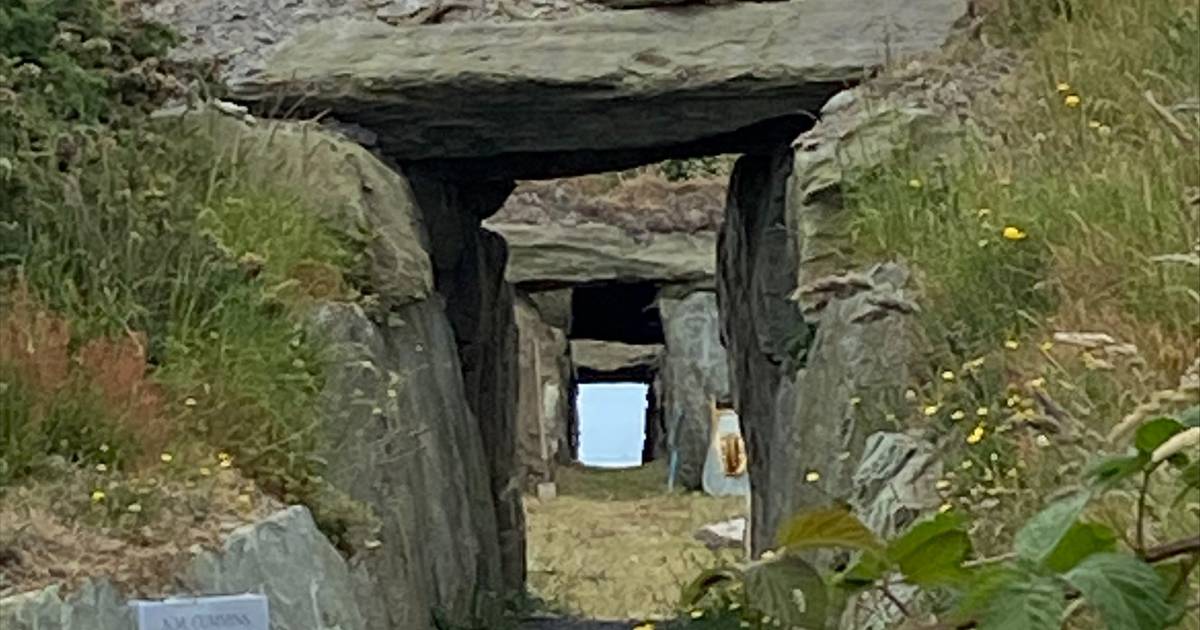 On a farm in West Cork, a few miles from Skibbereen, stands a gigantic arrangement of monoliths which, if the central chamber were round and not rectangular, might have been mistaken for an ancient monument.

But the heavily engraved horizontal plates in the heart carry messages in modern English. And speaking of modern, the unlikely centerpiece of the set is a scaled-down glass replica of an art gallery, London’s Tate Modern.

Meanwhile, even more illogically, nearby stands a leafless tree made of metal, with an oversized, semi-abstract cow in it, upside down.

These are all part of a sculpture garden, officially Reen Farm, conceived and built by Melbourne-born artist John Kelly since returning to the land of his ancestors several years ago.

Kelly remains better known abroad for his comic paintings and sculptures, especially depicting animals. But in Cork he seems to have been born again as an artist. And through the Famine, for which this part of Ireland was ground zero, he found a theme that he has pursued to the extreme.

The sheer size of the stones involved in his main installation is awe-inspiring in itself. That and despite the Tate model, and unusual for an art exhibition, however, the project is dominated by the printed word.

For example, on the floor of the counterfeit gallery, as you would more likely find in a church, a famous letter is engraved in stone. Dated December 22, 1846, it was written by a Cork magistrate, Nicholas Cummins, to the Duke of Wellington (and copied to the London Times, who printed it on Christmas Eve of that year), drawing urgent attention to the disaster. which then took place in the area.

Cummins had already warned the authorities directly responsible, to little effect, so now he turned to the retired Irish-born war hero and Prime Minister, hoping Wellington would use his influence to sound the alarm in Britain. Among the vignettes described in the letter, he described his experience visiting “shacks” near Skibbereen:

“In the first, six starving and hideous skeletons, apparently dead, were huddled in a corner on a filthy straw … I approached in horror and found by a soft moan that they were alive … four children, a woman and some once been a man. It is impossible to go through the details. Suffice it to say that within a few minutes I was surrounded by at least 200 such phantoms …”

Cummins has succeeded in raising awareness, although we know how limited that success was. A series of other stone tablets placed around Kelly’s monument recall the history of what followed, right down to the text of a speech delivered at the site a few years ago by anti-hunger activist Bob Geldof.

Also now engraved in stone, as originally printed in the Melbourne era, is the artist’s tribute to his father, David Benedict Kelly (1930-2017), who emigrated from Cork and spent a lifetime working in quarries in England and Australia before he died “at home in Sunshine”, a suburb of Melbourne, at the age of 87.

As that explains, Kelly Sr. was the inspiration for one of his son’s monumental sculptures, a version of which is nearby, of a man lifting a cow. It’s a variation on the Sisyphus myth, but Slant also includes a tribute to the sculptor’s mother, who Kelly Jr. earned his art school education through a “make a wish” contest advertised on milk cartons.

This, in turn, explains the cartoon-like (or cardboard-like) shapes of his animals in general, with their small heads and legs and large, geometric bodies.

As with most contemporary cows, artificial insemination was involved in Kelly’s conception. One of his recognized sources of inspiration was Australian artist William Dobell (1899-1970) who made papier-mâché cows during World War II to disguise military airstrips as farmland in the eyes of Japanese pilots.

But Australia is a country where, thanks to extreme weather conditions, the concept of real cattle in trees is not unknown. The artist Sydney Nolan, best known for his Ned Kelly photographs, once photographed a bovine carcass hung grimly from a tree after flooding in Queensland.

Kelly’s bovine sculptures tend more towards the humorous and, as with the real herds that make up their West Cork background, the real life sometimes adds to the joke.

A while ago, on the Champs-Elysées in Paris, a version of Reen Farm’s cow stood in a tree, where it once provided the perfect backdrop for a BBC report on a standoff between eurosceptic British MEPs and French police. MEPs were involved in an unauthorized demonstration to protest an EU ban on beef exports from Britain, imposed in the wake of mad cow disease.