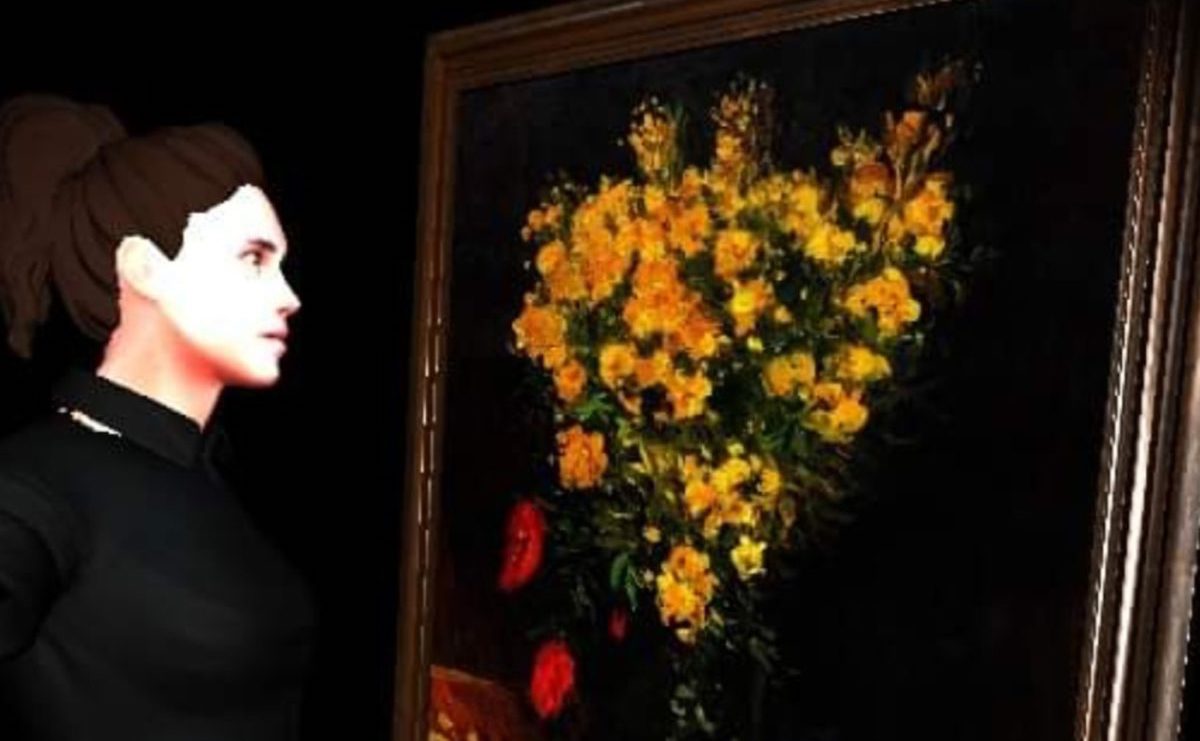 It is usually dark in the Stolen Art Gallery, with a night sky above it pierced by double skylights passively illuminating the room. You can’t see the walls because there are no walls. You can’t see your feet because you don’t have feet. All you can see, apart from an orientation path in the center of the gallery, is a semicircle of five paintings floating in the black space. Of course there aren’t any. They were all stolen decades ago.

Reconnecting with these lost works is the premise of the Stolen Art Gallery, an immersive virtual reality (VR) experience built by Compass UOL and accessible through the MetaQuest 2 headset. While the company touts itself as the first metaverse museum, it’s not even the first virtual Stolen Art Gallery — but it’s certainly a refinement of previous iterations of the idea, and perhaps the first to allow users to meet in metaspace during viewing stolen works of art long lost to the public.

The gallery presents Caravaggio’s “Birth with St. Francis and St. Lawrence” (1609), stolen from an oratory in Sicily in 1969; Rembrandt’s only seascape, “Christ in the Storm on the Sea of ​​Galilee” (1633); and “Chez Tortoni” (c. 1875) by Édouard Manet – both taken from Boston’s Gardner Museum in 1990 in one of the most infamous art heists in modern history. There is also Cézanne’s “View of Auvers-sur-Oise” (1879-1880), stolen from the Ashmolean Museum in Oxford; finally there is Vincent van Gogh’s “Poppy Flowers” (1887), stolen in 1977 from the Mohamed Mahmoud Khalil Museum in Cairo, recovered ten years later in Kuwait and then stolen again in 2010.

“We chose five relevant masterpieces by famous painters that have long been out of reach of the public,” said Alexis Rockenbach, CEO of Compass UOL, in an email interview. The team hopes to add other works to the gallery, as well as interactive features that can take users to “more and more realistic levels of people’s immersive experience within a metaverse.”

Here are things you can do in the Stolen Art Gallery: customize your avatar; navigate to a painting and put your face in (or through!); recall and discard detailed label information without bending over a small placard on the wall; hear overlay audio pipetted directly into your brain via mysterious Oculus technology, placing you on a ship at sea or in a crowded cafe, depending on what you’re looking at; use an array of handy pens to write messages in the air or temporarily contaminate paintings; send little streams of approval emoji out of your tool-watch and into the air (presumably to appeal to other gallery visitors, who weren’t there the times I was there), and use a selfie stick to snap photos.

Here are things you can’t do at the Stolen Art Gallery: get a feel for the quality of paint on canvas; hear hilarious exchanges between kids being dragged to the museum on a school field trip; taking pictures other than selfies; create notes that exist outside the app; and appreciate brushstroke detail. The optics of VR are stunning, and all the experiences within that sphere undeniably have an immersive quality (I’ve also toured a coral reef and danced with a robot in unrelated apps) – but it doesn’t feel like a substitute activity for it. seeing a work of art in real life, or even viewing a high-quality reproduction in print. It’s something quirky, funny and interactive, but it’s not the same thing.

“The gallery’s artistic concept was designed to give more importance to the artworks than to the gallery itself, so the setting and lighting just give focus and importance to the pieces, with no other distractions,” Rockenbach said. “To represent the images of the works, we used photos taken in high resolution so that the experience was as realistic as possible.”

This may come down to the quality of the internet connection, so it’s possible that my virtual experience was less focused than it should have been, but I wasn’t able to get the level of detail provided by a face-to-face meeting, or even a static high-quality image. However, the point being made in this case is that you can’t see the artwork in person, so creating an immersive VR scenario is a pretty fun way to view long-lost masterpieces. It’s certainly no more or less a starting point than any number of “immersive” exhibits that are popular at the moment, which use light projections and audio accompaniment – although the price tag on a MetaQuest 2 is more prohibitive (when not provided by the gallery, like in my case).

I felt that the Stolen Art Gallery is not so much a vanguard for the museum of the future, but a showcase of ways to create dynamic shared experiences in virtual reality. And, of course, it has the distinct advantage of allowing an art writer to attend without having to wear pants, virtual or otherwise.