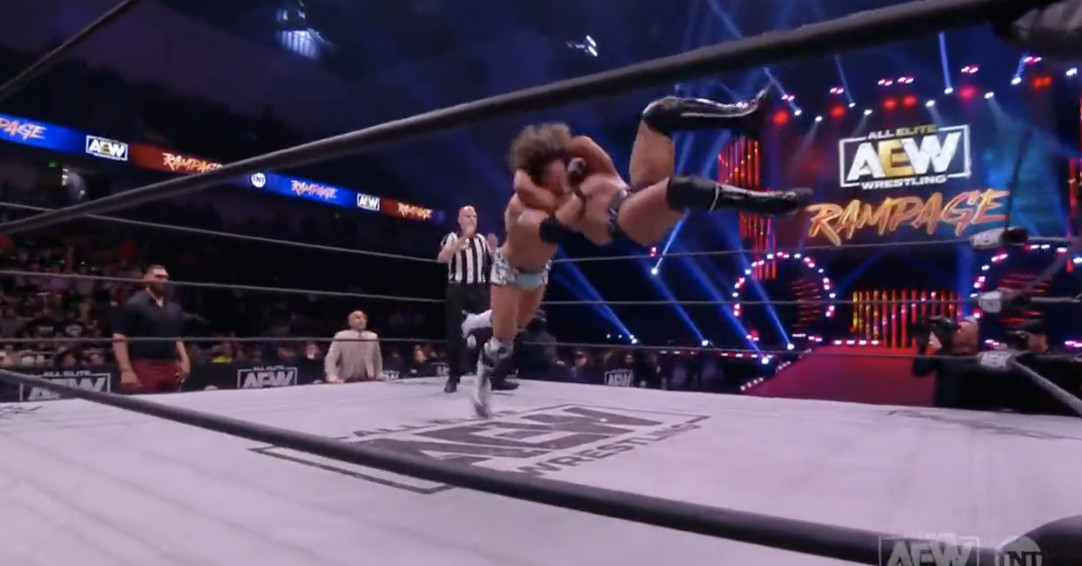 Let’s start right off with a recap of the show, followed by reactions.

Reba was on the ringside. The pace was constant movement with teamwork from both sides. When Baker ran into trouble in the corner, Reba provided a referee distraction for Baker to gouge Storm’s eye out. That led to a butterfly suplex from Baker. Hayter didn’t miss a moment connecting on a sliding lasso as soon as Storm sat up. Baker followed with a curb. Baker went for cover, but Soho tackled Hayter on top of the pile to break the count. Soho pushed Hayter out of the ring. Baker clocked Soho with a thrust kick. Storm took advantage of the melee for a roll up on Baker to win.

Eddie Kingston turned on the broadcast to threaten Chris Jericho. For the first time in 20 years, Kingston’s wife feared for his safety. That image is burned into Kingston’s soul. He will make Jericho feel fear and pain for the feelings his wife had.

Tony Nese was upset that he had to work his way into the show even though he is the most popular free agent signing with AEW. Mark Sterling formally requested a match for Nese against the undefeated phenom. (Hook?) Nese called Danhausen.

After a takedown from Hook, Drake faced him on the referee’s part. Drake slashed Hook in the chest. Hook didn’t back down and asked for another one. Drake hacked away, but Hook headbutted him. Hook then performed a beautiful suplex.

Drake went for a reverse DDT, but Hook responded to Redrum’s submission on Drake’s back. Hook refused to let go of the choke after the win.

Then Danhausen came out and asked Hook as a backup against Nese and Sterling. While Hook considered, Danhausen lost his temper and prodded Hook. The cold-blooded, handsome devil pushed Danhausen to the mat. Danhausen made a peace offering to hand over a bag of chips. Hook picked up the snack and threw it on the mat as he left.

Dax Harwood respects Adam Cole as an athlete, but he has no respect for the man as a person. FTR enjoys the positive reception from fans. They used to be rightly booed, because they were nasty villains. Harwood is going to bring that attitude back to Cole in the Owen Hart tournament.

Riho entered AEW in black for the first time. She nearly scored an early win on a flying crossbody. Sakazaki barely beat three to kick out. The Magical Girl came to life using a cartwheel as an evasive maneuver to strike with a dropkick. She followed out with a cannonball. Sakazaki focused on damaging Riho’s leg. As Sakazaki went for her springboard splash finisher, Riho raised her knees. Riho went on the attack with a dragon suplex. Sakazaki ducked a running knee to counter with a roll-up exchange. Riho exploded for a double knee strike. 1, 2, Sakazaki barely kicked out again.

Sakazaki got the upper hand by dueling the turnbuckles for a super maneuver that drove Riho’s face into the mat.

The match continued with both women taking punches in the center of the ring. Sakazaki wound up for a discus strike. Riho dropped low for a takedown that turned into a roll-up win.

Shawn Spears took credit for building Wardlow’s ego into a false sense of invincibility. Wardlow has become AEW’s #1 giant, and Spears has the cure with his Giant Killer chair.

Dan Lambert insulted the crowd in Baltimore. Ethan Page didn’t think Sammy Guevara was one to keep his word, so neither did he. The mixed tag bout with Paige VanZant is over. Frankie Kazarian interrupted him to request the TNT Championship match that Scorpio had promised Sky. Sky promised to be a dominant champion. He will bring respect back to the belt as a fighting champion. That means Lambert has to put his belt back in the trophy case. Lambert and Page were confused by Sky’s attitude. The champion continued on the microphone to take on Kaz’s challenge.

Mark Henry interviewed the main event participants. Konosuke Takeshita respects Jay Lethal, but he is not afraid. Lethal will give Takeshita a reason to be afraid. Enough talk. Henry concluded with, “It’s time for the main event!”

Sonjay Dutt and Satnam Singh were in the ring. Deadly strut after a drop kick. Takeshita prop after hip throws. Takeshita took the lead with a jumping shoulder tackle and slingshot plancha. Singh stepped forward as a distraction so Lethal could make a suicide dive. Lethal was in control with a corner slingshot, tilt-a-whirl backbreaker, kneebreaker and dragon screw leg whip. Lethal ended up with a lethal injection, but Takeshita gave him a drop kick when he was upside down against the ropes.

As the match progressed, Takeshita unloaded a bad lasso while both men were on the turnbuckles.

Deadly escaped a dragon suplex to counter for a number four. Takeshita was able to reach the ropes for a break. Lethal went back to the number four, but Takeshita countered for a brainteaser. Lethal kicked out on the pinfall.

Lethal fired up for a lethal injection, but Takeshita thrashed with a clothesline and jumped to his knee. Lethal was dazed with his shoulders flat on the mat. Dutt jumped onto the platform and distracted the referee. That gave Lethal enough recovery time to kick out at 2am.

Lethal scored a roll-up. Takeshita pushed his way out and sent Lethal into the ropes. Lethal used that momentum to bounce back for the Lethal Injection cutter to win.

Then the bad guys put the boots on Takeshita. Best Friends ran down but they were handled by Singh. Orange Cassidy teased a showdown with Singh to clear the way for Samoa Joe to arrive. Security made sure that Joe did not enter the ring when the show closed.

Jay Lethal and Konosuke Takeshita had a great match in the main event. Takeshita made a name for herself in AEW with that performance. The countermovement of both men was slick. The finish was a creative way for Lethal to strike with his finisher. It flowed smoothly making it seem like a spontaneous reaction. Lethal is delivering quality work after a somewhat slow start to his AEW career. He’s right that wrestlers should be scared, especially with Satnam Singh by his side. Singh continues to thrive as an imposing force. Crushing Chuck Taylor on the mat looked brutal in a good way. After Samoa Joe said he was coming for Lethal made me think Joe was going to get physical. When it didn’t, it provided a lackluster look to finish the show.

Toni Storm, Ruby Soho, Dr. Britt Baker DMD and Jamie Hayter kicked off the show with a blast of a match. The action was hot and never slowed down. I don’t think AEW needs tag titles for women, but this was the kind of competition that made me curious about a fully developed division. The flow in teamwork was excellent. For instance, I loved how Hayter was already pulling the strings for a sliding lasso before Baker lifted Storm for a suplex. That made it a handy bing, bang, boom moment. Give me more of that, and I could easily be persuaded to be on board for AEW introducing women’s tag team gold.

Riho and Yuka Sakazaki produced high-octane action. The back and forth exchanges were banging and kept me on the edge of my seat. The finish was a creative setup that showcased Riho’s strategy and skill. The Owen Hart women’s tournament should be a good time. I like how Storm and Baker are on the same side of the bracket to avoid an obvious finale. I can imagine Storm, Baker, Riho, Soho or Hikaru Shida winning everything. That’s a testament to how strong the field is. That’s not even taking into account who comes in as the joker contestant. For now I’ll pick Storm vs Soho in the final.

Hook rocked the house. His suplex on JD Drake was such a cool visual. Controlling the weight for a slow rise over the top and bending down for maximum impact was a beauty. The Hook and Danhausen story has taken a pleasant turn. At first it seemed like a cheeky joke for comedic reasons, but it has now evolved into something with feeling. Even though Nese’s punchline yelling Danhausen was seen from miles away, I still laughed out loud when it was delivered. That’s a smart match for AEW to book to force Hook to save Danhausen. And when it happens, the roof of the building will blow.

I don’t know what to think of the ever-evolving alignments with this Sammy Guevara/American Top Team story. Fans started berating Sammy and Tay Conti when I don’t think that was the original plan. Ethan Page and Dan Lambert typically garnered some fan support, but they were both clearly rude guys on this night. Sky seems to switch to babyface, but then he jokes that Conti is passed through the locker room. I’ll give this segment a shrug for now. I have no idea what’s happening. Defending Sky against Frankie Kazarian is a game I want to see, so that’s a plus.

Eddie Kingston’s sobbing story about that phone call is an example of why I have a hard time advocating for him as a wrestling character. So his wife feels bad, and that’s not right. But he’s okay with hurting Jericho so much that he can’t play with his kids anymore, which was a threat to Kingston long before the fireball wizardry. That smacks of hypocrisy. Does Jericho deserve a painful retribution? Absolute. Am I emotionally invested in making Kingston succeed? Absolutely not. Maybe it’s my fault I think Kingston is a good guy these days. His troubled disposition has been pretty consistent from the start and it’s not like Kingston is asking to be cheered on. That said, will I still enjoy watching the story play out? Give me hell yes. Give me more Daddy Magic too. And wizard tricks. And sparkly boots from Jericho. Is there a way to turn this feud into the Wizard of Oz?

rampage had really good action with energetic matches. The comedic moments felt natural to cause genuine chuckles. Add a little story flow to round out an enjoyable episode.

Share your opinion about rampage† How do you rate it? Who stole the show?