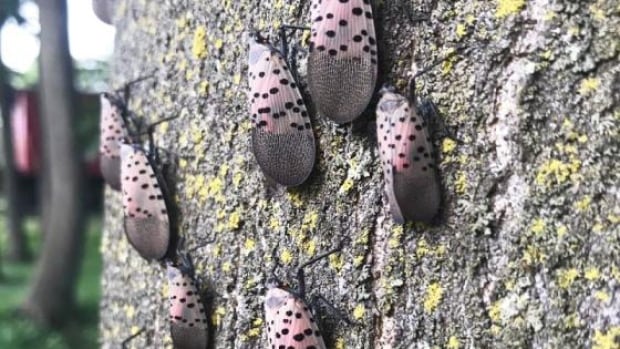 An invasive insect species has the potential to cause millions of dollars in damage to Ontario’s wine and grape industries, experts say.

The spotted lanternfly was recently discovered in upstate New York, not far from the Niagara wine-growing region.

There is cause for concern, and this insect “likes to feed on vines,” said Emily Posteraro, program development coordinator at Invasive Species Center, a Canadian nonprofit.

“It has caused a lot of destruction to vines and other tender fruit trees and other types of plants in the United States.”

The spotted lanternfly is “an invasive plant hopper native to Southeast Asia,” according to the Invasive Species Center website. The insect was first discovered in North America in Pennsylvania in 2014 and has since spread to a number of other states. It has yet to be detected in Canada, but industry experts say it’s only a matter of time before it crosses the border.

“We know it’s invading upstate New York and will eventually make its way to Canada,” she said.

The spotted lanternfly sucks the sap from vines, causing them to collapse, Zimmerman said.

She said she was concerned because if left unchecked, the insects could destroy entire vineyards, each costing more than $45,000 to replant.

“It’s a much more aggressive pest than we’ve seen in the past,” she said.

In fact, the species has caused millions of dollars in damage in Pennsylvania.

Millions of dollars in damage

A 2019 study from Pennsylvania State University estimated the annual statewide economic damage caused by the insect at between $43 million US and $99 million US, based on data from the 2017 US Census of Agriculture and a study among crop production experts.

According to the researchers, grape growers were especially hard hit, but the figures also include the operators of the nurseries and the Christmas tree growers.

Early detection is key to limiting damage, Posteraro said. That’s why she and other experts are spreading the word, in hopes that Ontarians can keep an eye on the insects.

“It’s easier to get it under control, and it’s also a lot cheaper in the prevention phase,” she said. “Once you’re in the management stage…it’s proven to be very difficult to control and eradicate.

The spotted lanternfly can be found in its three life stages.

The Invasive Species Center describes its eggs as “brown, seed-like, covered with a gray, mud-colored secretion.” They are found grouped in a vertical formation, usually found on trees, but can be placed on any surface, including cars.

Adults have wings that are about an inch long. They have black and gray spots, but appear bright red when the wings are open.

The insects are most often found on or near the Tree of Heaven, a common plant that is also invasive to this region.

If he is spotted, Posteraro says he should take photos, note the location and report the sighting to the Canadian Food Inspection Agency.

Liette Vasseur, a professor of biological sciences at Brock University, said this impending invasion is an example of a larger problem linked to climate change.

A longer growing season and more moderate winters due to rising temperatures allow more invasive species to spread in the region and live longer.

This is an increasing problem for all growers, Vasseur said.

“We know we have a few more species of locusts … that come over time because the distribution of species is moving north because it’s warmer,” Vassueur said. “That’s the big challenge we have to face.”

“We have new species that we didn’t have before.”

Ontario’s Department of Agriculture, Food and Rural Affairs said in a statement to CBC Toronto that it is currently investigating spotted lanternflies in high-risk areas to aid in early detection.