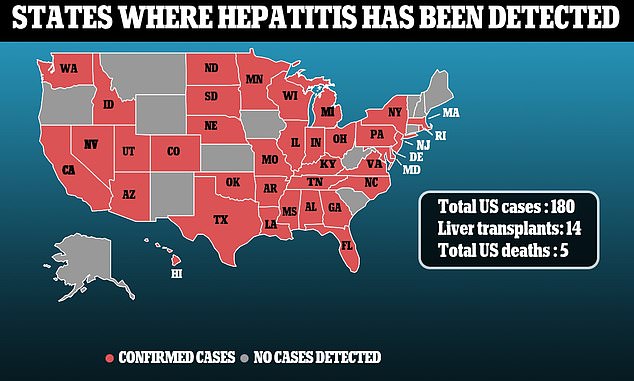 Another 36 children have fallen ill during the mysterious outbreak of hepatitis, health chiefs revealed on Wednesday – after six deaths were linked to the disease.

It brings the number of children affected by the liver infection to 216 in 37 states, with Mississippi and Utah added last to the growing list.

No new deaths or liver transplants have been reported in the past seven days, the Centers for Disease Control and Prevention (CDC) revealed in their weekly update, with a total of 14 and six, respectively.

The agency has not revealed where the fatalities occurred due to “confidentiality issues,” but Wisconsin state health chiefs say at least one has been recorded.

Globally, the US has the most fatalities and suspected cases on record from all countries, although this may be due to stronger surveillance here.

Indonesia has reported five deaths in the outbreak, while both Palestine and Israel have each recorded one.

Scientists say it will be weeks before the cause of the cases is revealed, although the CDC continues to consider an adenovirus infection — which can cause the common cold — as the most likely cause.

The outbreak could also be the result of weakened immunity due to lockdowns that have damaged people’s immunity, experts warn.

Many of the cases are “historic” and have occurred in the seven months since October 2021, but are only now coming to light as doctors investigate samples collected from sick children in the mail.

The CDC said last week there was no sign of cases increasing in recent months.

The territory of Puerto Rico has also recorded at least one case of mysterious hepatitis.

Experts warn that lockdowns mean the US may now be entering a period when it’s difficult to know what to expect from infectious diseases.

dr. Marion Koopmans, head of the viroscience department at the Erasmus Medical Center in Rotterdam, the Netherlands, warned STAT News, saying this was due to less recent immunity.

She said blood tests on children showed they had been on a sort of “infection honeymoon” with few antibodies to normal diseases.

She added: ‘You really see that in the second year of the pandemic, children have much less antibodies against a range of common respiratory viruses.

The CDC said last week that an adenovirus infection — which can cause the common cold — was their main hypothesis for the cause of the illness, although they were also still investigating whether Covid infections played a role.

They’ve ruled out virtually all theories that suggest a mutation in the virus could cause the disease, or that it could be related to pet exposure. There is no evidence that the Covid vaccine causes hepatitis.

The usual causes — hepatitis viruses A, B, C, D, and E — have all been ruled out.

Q&A: What Is The Mysterious Global Hepatitis Outbreak And What’s Behind It?

Hepatitis is inflammation of the liver usually caused by a viral infection or liver damage from drinking alcohol.

Some cases resolve on their own with no lingering problems, but a fraction can be fatal, forcing patients to need liver transplants to survive.

What are the symptoms?

They may also suffer from jaundice – when the skin and whites of the eyes turn yellow.

Why are experts concerned?

Hepatitis is usually rare in children, but experts have already noticed more cases in the current outbreak than they would normally expect within a year.

Cases are of “unknown origin” and are also serious, according to the World Health Organization.

What are the main theories?

Experts say the cases may be related to adenovirus, often associated with the common cold, but further research is underway.

This, coupled with Covid infections, could trigger the spike in cases.

About three quarters of British cases have tested positive for the virus.

UK experts tasked with investigating the wave of diseases believe the endless cycle of lockdowns may have played a role.

Restrictions may have weakened children’s immunity due to reduced social mixing, putting them at increased risk for adenovirus.

This means that even ‘normal’ adenovirus can have the serious consequences, as children don’t react to it like they did in the past.

Other scientists said it may have been the adenovirus that acquired “unusual mutations.”

This would mean it could be more transmissible or better able to evade children’s natural immunity.

UKHSA officials included ‘a new variant of SARS-CoV-2’ in their working hypothesis.

Covid has caused liver inflammation in very rare cases during the pandemic, although these have occurred at all ages rather than isolated in children.

The CDC has noted that environmental triggers are still under investigation as possible causes of the diseases.

These may include pollution or exposure to certain drugs or toxins.