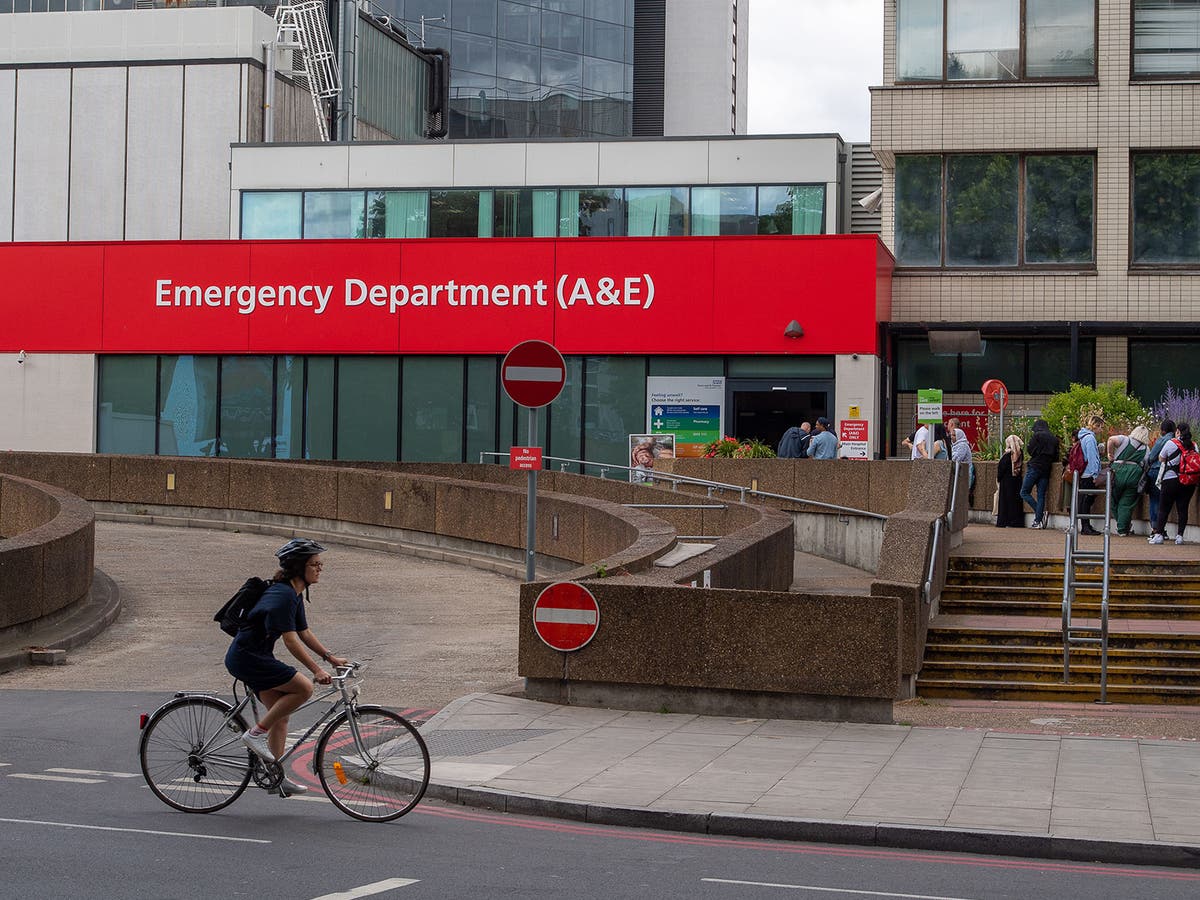 A&E wait times are now “apocalyptic” and “worse than ever thought” leaked NHS data shows, and could lead to 1,000 patient deaths per month, The independent can reveal.

The “hidden” monthly wait times, not published in national data, have more than doubled this year compared to 2019.

dr. Katherine Henderson, president of the Royal College of Emergency Medicine, warned that data shows the trolleybus wait is “worse than ever thought” and said it is “outrageous” that the real numbers are not being published despite promises.

dr. Henderson warned that the worsening of emergency wait times is the result of “decades of underfunding” and “warnings not heeded” about staffing and social care.

In one message to staff in Nottinghamshire, seen by The independenthospital leaders said last week that patients had to wait more than 40 hours on beds in the ER, while in some parts of the hospital there was only one health worker for every 14 patients, and some patients waited at home without care.

The NHS has collected data on waiting times of 12 hours, measured from the time a patient arrives at the ED. This data, as previously discovered by The independentis much higher than the official figures published each month by the NHS, which only measure the time it takes after a decision has been made to admit a patient.

Despite the increase in long wait times, the average number of people going to the ED each month at 1.7 million is broadly comparable to 2019, suggesting that the wait times are not caused by an increase in the number of visitors to large EDs .

Statistician Dr Steve Black, who published a report on emergency room death rates earlier this year, said based on the number of waiting times discovered by the independent, about 1,000 additional patients per month could die in the emergency department due to long wait times.

Feryal Clark, the shadow minister for primary care and patient safety, said: “There can be no doubt that after 12 years of mismanagement by Tory, our NHS is in crisis and lives are at risk. Liz Truss and Rishi Sunak desperately want to move away from this damning record, but the fact is, their fingerprints are all on it.”

In December 2021, Christine Boone of Lincolnshire told: The independent her mother Beryl Sanders, who is blind, had to wait 10 hours for an ambulance in “excruciating pain”, three hours outside the ER and, once inside, another 20 hours in a “noisy” cubicle.

Ms Boone said: “She is very sensitive to sound so it was like being in hell on earth for her… the doctor called me in and said we couldn’t find a bed for her but we have to admit her because she can not. Action. She’s in so much pain. When I got there, Mom was alone. There was not enough ED staff and I had to give her a sandwich and a cup of tea. I had to warn someone to try and get a bedpan.”

While waiting alone in A&E, items were stolen from Ms. Boone’s purse, her daughter said.

Long waits usually experienced in the winter are now all year round, with a 31-year-old, Katie Stones, from Hereford also describing a 20-hour wait in a bed after being taken to hospital in April.

She said: “The staff are doing their very best for the patients, but they are frustrated that their best is not what they would like to provide… how many patients have yet to die, how many staff has yet to leave?”

dr. Katherine Henderson, president of the Royal College of Emergency Medicine, said: “We’ve known for a long time that the true number of patients staying more than 12 hours in the emergency room is hidden, but these numbers are worse than anyone could have imagined.

“These numbers represent real people, real lives; lives are endangered. While the pandemic will have had an impact, it is the result of years of unheeded warnings about the lack of available beds, staff and social care. A decade of underfunding is behind this and the NHS is struggling to catch up.”

Although NHS England collects data on patients’ waiting times after arriving at the emergency room through multiple routes, it has not yet published figures.

dr. Henderson said it was “outrageous” that the real figures are not published monthly, adding: “We need full transparency on this issue so that the government and NHS can work to resolve it. It is deeply disturbing that there seems to be a lack of concern about this.”

Dr Black said: “Based on work we published earlier this year on the relationship between excess mortality and patient waiting time, it is likely that there are more than 1,000 additional deaths each month in UK emergency departments compared to the number reported. would have died, the waiting times were shorter.”

He explained that compared to 2016, when the NHS was under less pressure, there was a “significant increase” in mortality for people who had to wait longer than five hours. Estimates made in the original study suggested that one extra patient dies for every 82 who wait six to eight hours.

“The number of monthly wait times also clearly shows why Covid cannot be blamed for the current problems. The current state of waiting in major EDs is apocalyptic and we are seeing neither honesty about the numbers nor good ideas about how to improve them,” he added.

An NHS spokesperson said: “Official, published NHS statistics show hospitals are facing both record levels of emergency and emergency ambulance calls, thousands of patients hospitalized with Covid-19, and ongoing problems with discharge. of patients who are fit enough in the hospital. community and social care institutions.

“While this study of deaths is based on data from 2016 – 2018, when more than 26 million visitors were registered, it remains as important as ever that people report for care when people need care – either through 111 online or through 999 urgently. life-threatening cases to call.”

A spokesperson for the Ministry of Health and Social Care said: “We know that emergency room staff are under increasing pressure, so we are taking action to ensure people get the care they need, when they need it. .

“The £30 million St John Ambulance contract will increase support during periods of high pressure – including providing 5,000 hours of support per month to the English Ambulance Trusts and helping to reduce response time delays from 999 calls.”

The DHSC added it will allocate £150 million for ambulance services to help cushion the pressure.