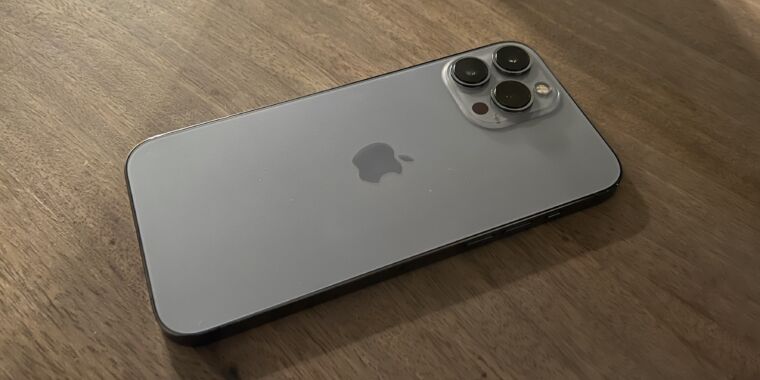 Three things in life are certain: death, taxes, and new iPhones in September. Bloomberg’s Mark Gurman reports that this year’s iPhone event will be held on Wednesday, September 7.

According to Gurman, the iPhone 14 retail lineup will trim the 5.4-inch mini display size that Apple has sold for generations. The standard 6.1-inch model is joined instead by a large-screen 6.7-inch version, which matches the screen size of the current iPhone Pro Max model. But these phones will also continue to use the current Apple A15 Bionic chip and will look similar to the iPhone 13.

The iPhone 14 Pro will reportedly be more exciting, replacing the current camera notch with a few holes for the front-facing camera and FaceID scanner; many Android phones have already switched to similar pinhole cutouts to save screen space. The Pro phones will also reportedly get a faster chip and an even larger triple-lens camera, anchored by a 48-megapixel wide-angle camera plus 12-megapixel ultra-wide and telephoto cameras.

The standard Apple Watch SE will reportedly get a faster chip — the current SE uses an Apple S5, and a new one could use an S6, S7, or a newer, yet unannounced chip. This new SE model will hopefully mark the end of the long-lived Apple Watch Series 3, which the company is still selling even though it won’t receive the watchOS 9 update this fall.

A September 7 announcement for the new iPhones and watches likely means there will be at least some new devices for sale by the middle of the month, roughly coinciding with the release of iOS 16. Gurman says Apple Store employees have been told to prepare for a September 16 launch.

Apple often holds an iPad and Mac-focused event in October to complement the September event, which is when we expect updates to those products and the release of macOS Ventura and the reportedly delayed iPadOS 16. Gurman predicts we’ll finally see a USB-C version of the low-end iPad, new M2-based iPad Pros, and updated Mac mini and MacBook Pros before the end of the year.