Apple today started selling some additional accessories through its online store, including a Belkin 70W charger with dual USB-C ports. The charger can be used to charge a MacBook up to 50W and an iPhone or iPad up to 20W simultaneously. It is ideal for charging any MacBook Air, but it is also compatible with MacBook Pro models.

The charger is built with gallium nitride (GaN) material for a more compact design and improved charging efficiency compared to traditional silicon-based chargers. In the United States, the charger has folding prongs and costs $59.95, and a 65W version of the charger with a Type G plug is available in the United Kingdom.

Apple released its own 35W dual USB-C chargers earlier this month, with compact and standard size options for $59 each. The Belkin charger offers double the total wattage at a nearly identical price, giving customers a more versatile and affordable option to charge multiple Apple devices simultaneously. 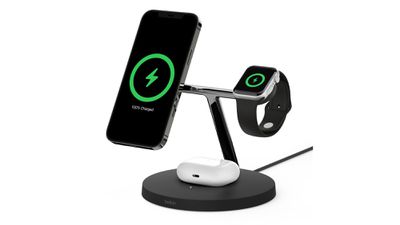 Belkin’s updated 3-in-1 wireless charging stand with MagSafe is also available to order through Apple’s online store, after it was announced earlier in the day. The new version of the stand adds fast charging support for the Apple Watch Series 7, allowing the watch to charge from 0% to 80% battery life in approximately 45 minutes.

The stand can still charge an iPhone 12 or newer via MagSafe at speeds up to 15W, and an AirPods or AirPods Pro case at speeds up to 5W. In the United States, the stand costs $149.95 and is available in white or black. 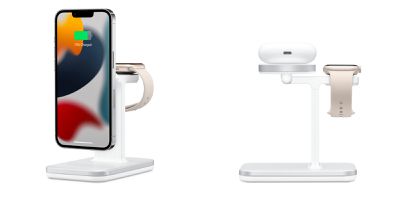 Apple has also started selling OtterBox’s 2-in-1 wireless charging stand with MagSafe for $129.95. The stand features a MagSafe charger that can charge an iPhone or AirPods case when tilted upright, along with a magnetic charging puck for the Apple Watch that is said to support fast charging for the Series 7.