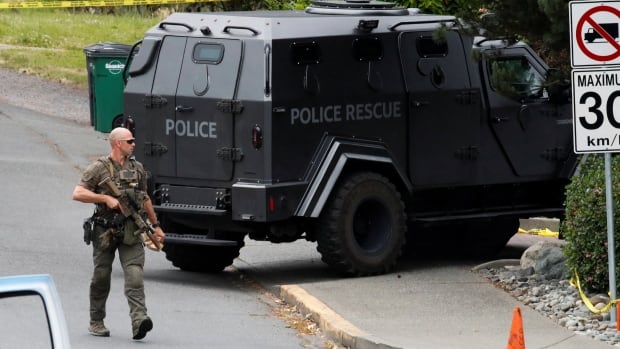 The site of a “chaotic” shooting that killed two suspects and injured several police officers in Saanich, BC, on Tuesday, remained closed Wednesday morning.

Police tape surrounded the area around the Bank of Montreal branch on Shelbourne Street on Wednesday as police officers quietly combed the area. An abandoned white police van stood in the parking lot, the doors still open from the day before.

Police are expected to provide an update on Wednesday afternoon.

Two suspects were killed and six members of the Greater Victoria Emergency Response Team were injured when gunshots broke out outside the bank late Tuesday morning. Witnesses described hearing dozens of shots in a row just after 11 a.m. PT.

Police said the shooting started outside the bank, although it was not immediately clear who fired first. The suspects were armed and believed to be wearing bulletproof vests.

VIEW | Police exchange gunshots with suspects outside Saanich, BC, bank

2 suspects dead, 6 police officers injured in exchange for gunshots at BC bank

Police say two suspects have died and six members of Greater Victoria’s emergency response team are in hospital after a shootout at a bank in Saanich, BC

Three of the injured officers are members of the Saanich Police Department and three of the Victoria Police Department. Three were expected to be released after being treated in hospital, while Duthie said three required surgery for “many more” serious injuries.

Saanich Mayor Fred Haynes said officials would not provide a public update on the officers’ conditions.

“We’re not ready to release all that yet… we hope to have more news for you later,” Haynes said in an interview early Wednesday.

Saanich police said they were “overwhelmed” by statements of support.

“Your kind words go a long way during difficult times like these, and we will share your comments with our agents,” a tweet read on Wednesday.

Police are expected to provide an update at a press conference at 3:30 p.m. PT. The city block around the bank will remain closed, as will the businesses in the mall across the street.

The bank is located in a largely residential area of ​​Saanich, about a mile west of the University of Victoria campus. The shooting started when the square was full of people shopping at nearby stores or stopping at restaurants for lunch.

Saanich Chef Const. Dean Duthie described the scene on Tuesday as “chaotic, tragic, dynamic and violent” and said it was “really astonishing” that bank employees and members of the public were not injured.

“This level of violence in my service at Saanich, I am only 27 years shy, there is nothing to this extent in my experience,” Duthie said at a news conference.

Homes and businesses were evacuated overnight as the RCMP’s Explosive Ordnance Disposal Unit investigated the possibility of an explosive device in the vehicle the suspects allegedly used.

People who lived in houses across the bank said they didn’t immediately recognize the sound of the shots as gunfire. When they looked out their windows or over their balconies, they realized the gravity of the situation and ran back inside.

“You could hear people yelling and then they yelling at people to get back in,” said resident Christopher Ford, whose wife and daughter rushed to hide under a table at the back of the house.

“It was one of the most terrifying experiences for my family.”