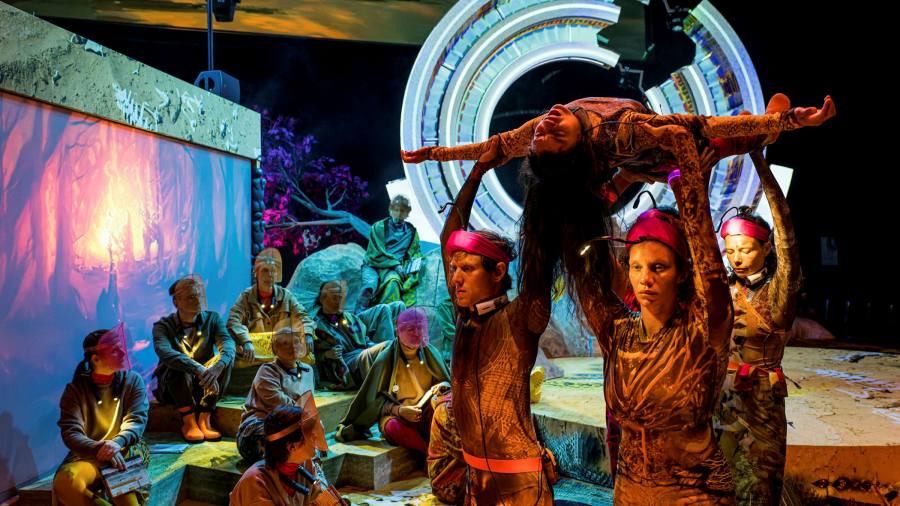 In Markus Selg’s production of Einstein on the beach, the four-hour opera by Philip Glass and Robert Wilson, we find neither Einstein nor a beach (nor anything resembling a plot). What the audience at the Theater Basel did get in mid-June, however, were singers in a prehistoric but sci-fi landscape chanting numbers one through eight; video screens where trees mutated into other trees, houses fused into other houses; cardholders crowd around an ancient temple on the revolving podium. So far, so Selg.

Normally it is bad practice for the audience to walk across the stage, but such involvement is all part of the German artist’s plan for the production, which he and his (work and life) partner, director Susanne Kennedy, thought. The concept, he says the next morning, is that the audience “really immerses yourself in this thing”, physically doing what Glass audibly does, gobbling you up with nearly endless, but always subtly varying, pieces of minimalist music. “There are performances when the whole revolving stage is full of people, all wrapped up, all there and fully committed,” he says. “It is beautiful.”

These performances were during the busy week of the Art Basel fair and the audience ahead Einstein, performed with diabolical brilliance by André de Ridder, was a little less dedicated – there were about 400 at the start and probably only 90 at the end. “In the beginning there was a fomo vibe,” he says with a laugh, “people came in and they knew they had to go to the next dinner or something, which is good too.” But for the performers, who have to focus almost as much on counting their reps as they do on their vocals, “it’s pretty tough when people come in, do a round on the phone, and then leave.”

Immersion in real and virtual worlds – and asking if there really is a difference between the two – is at the heart of Selg’s work and has been a Photoshop pioneer since he began creating digital art in the 1990s, taking photos pixel by pixel. signed. Born in 1974 in an industrial town in southern Germany, Selg lights up when he talks about ‘the sacred corner’ where he created his work on his computer, often using digital collage images, and about the first time he went online, the beauty of having access to a world of images. It created “the feeling that the world doesn’t end here in this corner anymore”, but it also caused a fear, the double edge of all technology.

Since then, the vibrant digital collages manipulated with painterly effects have been a strong part of Selg’s work, and he has developed installations – “operas or stagings”, he calls them – where the viewer can enter a physical manifestation of the artist’s mind. For his gallery’s Art Basel booth, Guido W Baudach, he designed a tapestry where molten gold swirls over bleached bones; objects in the form of rocks, covered in digitally printed rock-like dust, stood next to the artworks for sale.

As real as that physical world is, for Selg what is just as real — or possibly more real — is virtual reality. He and Kennedy, in collaboration with virtual designer Rodrik Biersteker, have created a theatrical experience called I AM (VR), where participants put on a headset and emerge into a world visualized by Selg, all ancient tombs, floating drones and purple swirling skies. (When Einstein travels to Berlin, audience members will be able to use I AM (VR) on another stage.) Selg argues that by distancing ourselves from our bodies, society, and circumstances, VR allows us to reflect on them all the more clearly, on reality itself — the same as meditation, he says. And indeed the same as the trance in which Glass puts music.

He sees real artistic and philosophical possibilities in what was often a gimmick. “With new technologies like VR, I think it’s a cave painting of our time. † † Cave paintings were the first time the imagination people had in their heads could materialize them outside, in a room, on walls, to share it with others. That was such a big leap, like language came along, and I think there’s something like that now, with the internet and also with virtual reality. We’re just taking our first strokes on this big wall that we’re making, which a lot of people call the metaverse or whatever.

His combination of cave painting and VR neatly summarizes an important part of his practice: his mix of prehistory and sci-fi in both print and stage work is not merely an aesthetic choice. Rather, it removes everything we could identify, and makes the world less familiar in the same way as his use of VR itself. He wants us to lose ourselves in order to understand ourselves.

But maybe we’re already lost. “I think we are further into the metaverse of virtual reality than most of us think. We’re so connected to our phones that it’s like a part of us, we can look up anything. I think I live in virtual reality all the time.”

The most talked-about technology today, from teen bedrooms to Basel’s art fairs, is the non-fungible token (NFT), a virtual certificate of ownership for a digital work, so unsurprisingly Selg is considering working with it, likely to “micro – dramas” with virtual rooms. But the idea of ​​data as art is nothing new to him. “Twenty years ago, when a collector bought a piece, like a print, I always said, ‘The data, this is the real piece.’ In the beginning I gave them a CD for the piece – nobody was interested!” If the core of his work is the data, then technology will finally catch up with Selg, not the other way around.

He wants to take time to think about Einsteinbut he and Kennedy have already had another offer to produce an opera: Wagner’s parsifal in Antwerp in 2025. It is probably the other piece that best fits their interests, as it deals explicitly with space, time and the nature of reality, albeit while telling the story of the Holy Grail. But for today Selg is happy in his version of the real one. Thanks to technology, “what I can do now has always been my dream. I now live in this dream world.”

‘Einstein on the Beach’ runs from June 30 – July 3 at the Haus der Berliner Festspiele, Berlin, berlinerfestspiele.de