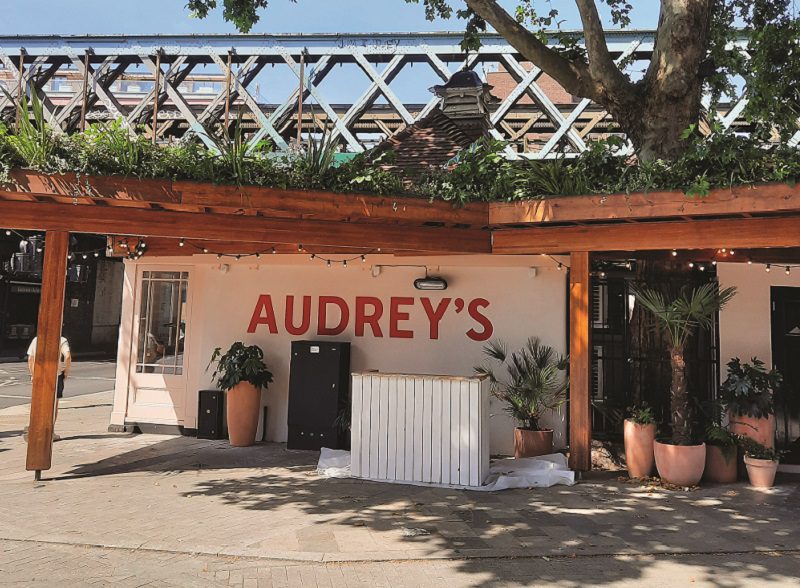 Who is Audrey? I still do not know.

I imagined the restaurant was named after THE Audrey (Hepburn, of course) or maybe the owner’s mother or grandmother.

Anyway, she’s a cool lady. This is the best example of a neighborhood restaurant I’ve seen in a long time.

For those wondering what I’m talking about, allow me to explain.

The neighborhood restaurant is the modern gold standard, the kind of place that is not too far from home, so comfortable that diners are easily attracted for breakfast, lunch or dinner again and again.

The food equivalent of a local, Audrey’s is this home from home. It’s a bit like an old slipper, but in a good way.

The atmosphere is relaxed, the staff attentive and chilled but mostly because they look like they are having a good time, and the menu is small.

My family arrived on what felt like the hottest day of the year, it wasn’t officially, but it sure was suffocating in the city. As we approached, there was something familiar about the building, detached, in the middle of the road, at an intersection.

Located in Flat Iron Square, it’s a familiar area to me, but it wasn’t. The solid architecture was unmistakable and it dawned on me that we were actually looking at a repurposed Victorian toilet.

The sun had propelled most diners to outside tables, but with a small child in our toes, we darted in and away from the traffic whizzing way too close.

There was only one couple inside and their excitement and general giddiness hinted at a first date situation. I told my husband that this was a memorable place to grow the romance.

This couple chatted about what looked like cocktails, which surprised me a bit given the early hours – 11am. I asked the waiter and he assured me that everything is fine, they had ordered breakfast cocktails, which are available from 10am.

A tenner a pop but worth every penny – these are seriously good cocktails.

For anyone wondering, unfortunately the price tag isn’t steep by central London standards. The interior has a North American feel, with upscale dining touches throughout, albeit modern.

I have to admit that when I arrived and saw the menu I was a little disappointed as all the choices seemed to point to and include eggs of the breakfast variety.

It may have had something to do with the delicious cocktail, but after a few sips my stomach didn’t feel like eating breakfast.

The pork chop schnitzel, with aoli ​​and pickled kohlrabi, immediately caught my eye, but I had only just turned my lips when I heard it was part of the menu after 5pm.

The list was endless, but not for my visit.

I definitely didn’t like eggs in any of the seven incarnations available, though Shakshuka was a departure from the more traditional scrambled, poached, fried routes.

Lucky for me there were four sandwiches up for grabs, bacon, brie and chilli jam worked for me as a combo.

I’m not a huge brie aficionado, but when I added some decent smoky striped slices and pack-a-punch chili jam, I got a grade A sarnie.

I increased the order with a portion of fries to give it more of a lunchtime feel.

Other choices included truffle mushroom, Reuben and goat cheese – all around £7 and available until 3pm.

This is the time when the breakfast service is ready – for those who do not like eggs, there is birch muesli, overnight oats and pastries.

This made me wonder what to eat between 3pm and 5pm as I’m sure Audrey’s doesn’t close mid-service.

Our server was very accommodating to our little one, for which we were grateful. She verbally dissected the smoked salmon as ordered, removing rye bread, capers, cream cheese and lemon, leaving only the fish when her plate was presented.

Despite my initial disappointment that I didn’t quite get what I wanted, I like what Audrey’s does and will return one evening.

Sharing platters, such as leek gratin, with Chablis, Ogleshield fondue and parsley crumbs drove me wild – how fantastic does that sound?
I still couldn’t tell you who Audrey is? Perhaps she was the last patron to revere public convenience.

The general craze for chicken wings sees no sign of going anywhere.

From lunchtime until late at night, wings, hip-hop beats and own brand beer are the order of the day.

Choose from wings, boneless appetizers and chicken breasts, all with tasty homemade sauces.

vegan wings – made from jackfruit – are also available, all coated in vegan versions of Wing Shack sauces.

If you fancy a burger, choose from the Banging Buffalo, Chipotle BBQ, Eat My Thighwhich comes with sriracha mayo and coleslaw, or The Maple Habanero — if you can handle the hot drizzle.