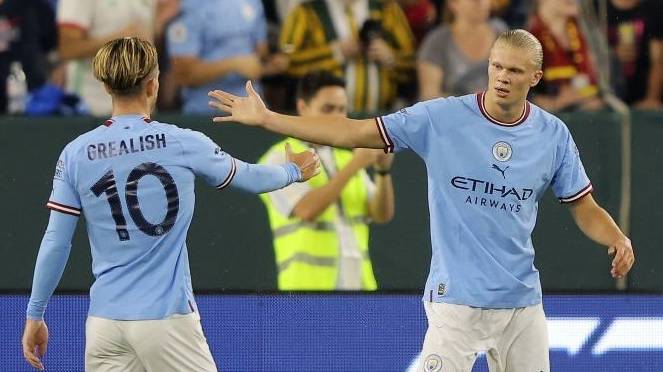 The big news from Pep Guardiola’s side was a debut for star player Haaland, who started in a strong line-up from City and scored after just 12 minutes.

The match, which started 15 minutes late due to weather conditions, was postponed again immediately after Haaland’s goal and was eventually resumed almost an hour later.

He rarely needed to use his gloves, but he didn’t do much wrong.

Wandered forward more than a few times and sent a particularly large cross.

Good to see him back on the pitch for the game against Liverpool.

Put in some great tackles and blocks and offered his usual set pieces threat. So far it looks very useful that we have not sold it.

A decent marauding fullback, always fun to watch. Hopefully his display means Pep wants to use him more in the current season, and the fullbacks get more license to make forward runs as well.

So good at making difficult things easy, and it seems like he’s got an extra pair of eyes on the back of his head.

Just as technically impressive and hardworking as we’ve come to expect from him, and looks up to the Community Shield.

A De Bruyne ready to start the season at speed already is a dangerous prospect for the rest of the league. Involved in the Haaland goal and let a beautiful ball play to Aké in the first half.

Assisting Haaland’s goal was just the culmination of an excellent overall performance. This was possibly the most confident and dangerous Grealish we’ve seen since his move, and the first time it felt like we were looking at a player who could easily push for PFA Player of the Year in the near future.

Scored a good first goal and remained dangerous throughout the first half. Unfortunately, his second was disallowed for tight offside. Much better in the build-up than many tried to convince us.

Not at its best, which is understandable given how little time the players have had to focus this summer.

Another energetic performance from the new signing, who already seems very comfortable in the system.

No real time to mark but looked lively.

No time to mark, but almost scored a brilliant goal.