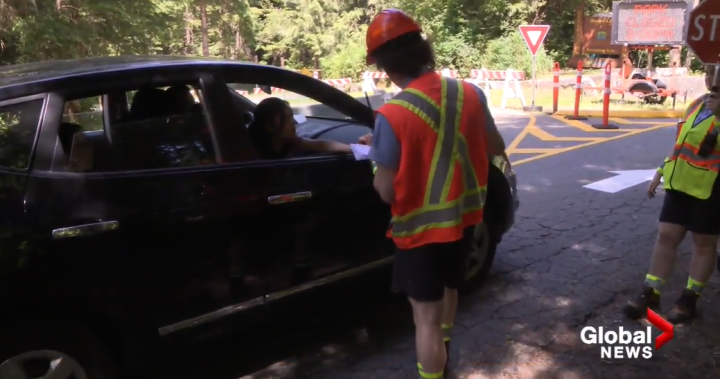 A Metro Vancouver park user speaks out after being evicted from Buntzen Lake despite a Sunday day use reservation.

Lindsay Heller told Global News that she stayed up until midnight on Friday to secure the afternoon reservation, and felt as if she had “won the lottery” when she landed an afternoon slot for the long weekend Sunday.

As part of a pilot project conducted by BC Hydro, which owns and operates the lake, this year participants are required to book a free reservation to access the lake, an initiative aimed at reducing congestion and illegal parking on nearby streets.

Citing neighborhood effects, BC Hydro is implementing a parking pass at Buntzen Lake

“I could have had all day, but I knew we wouldn’t be there in the morning, so we took the afternoon and planned our whole day around it — packed the kids and off we went,” she said. .

On Sunday, Heller, her husband, their two children, and her father packed up, made lunch, got in the car and made the 80-minute drive to the lake. The family deliberately arrived around 4:30 p.m. expecting the morning swimmers – whose booking ended at 2 p.m. – would have disappeared, she said.

Instead, they arrived at the parking lot and were turned away by the staff.

“They told us they were not honoring the afternoon reservations because the morning people hadn’t left and there was no parking,” she said, adding that she asked the staff what they were doing to resolve the issue.

“They had no answer for us. I feel sorry for them. It seemed like they were pretty ill-equipped to deal with that. You know, they’re also young people out in the sun,’ she said.

The staff instructed them to go to a nearby shopping center and come back later, but said they could not guarantee there would be a place for them, she said.

The family went to get an ice cream and returned about an hour and a half later, when they were finally allowed entry – about 30 minutes before the sun set behind the ridge.

“It was better than nothing, but it ruined our day and didn’t make it as much fun as it should have been,” she said.

On Monday, BC Hydro spokesman Simi Heer apologized to reservation holders who were turned away.

Heer said the park managers were dealing with a unique situation: two consecutive reports of missing persons requiring a grid search and removing staff from the beach and parking lot.

“In this situation, our park staff would go around asking people whose passes had expired to leave, but unfortunately they were called to two emergencies in succession and were unable to do so,” she said.

Next month you need a reservation to park at Buntzen Lake

Heer said this was the first time in the five-week-old pilot project that reservation holders had been turned down.

She said BC Hydro would take the lessons from the incident into account when evaluating the initiative at the end of the summer. But she said park users should also do their part.

“For the system to work, we need people who book times to leave when their time expires.”

“We’re all doing this together and we’re doing our best to learn and adapt procedures, but we also need people to do the right thing.”

For Heller, the experience put a damper on what was supposed to be a fun family outing.

She said the reservation policy appeared to be working in terms of preventing illegal parking in the area, but there were clear issues that needed to be addressed for park users.

“It’s really frustrating because I’ve done the right thing, and I believe in honesty, and it’s the morning people who just don’t care,” she said.

“If you decide to be there until 2pm… and you decide to just stay, then I think the car should be towed. It is only fair for the people who work all afternoon to come and enjoy the area with their families.”