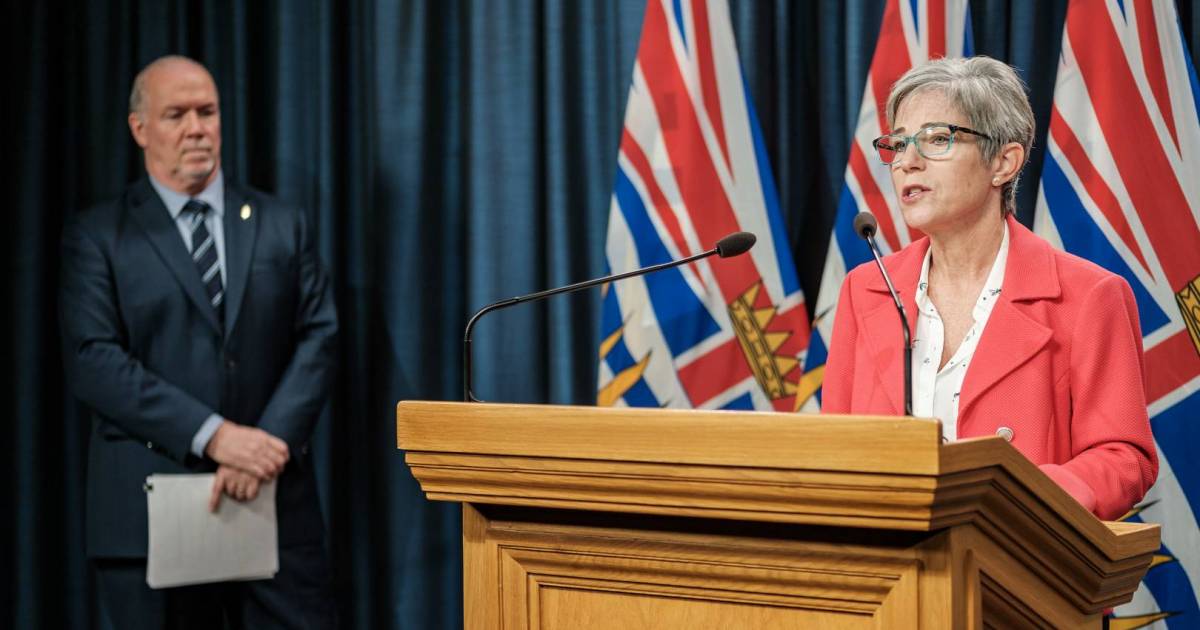 The BC government is in financial trouble and it can’t get any better for a while.

The bottom line is that BC is nearly $13 billion in the red in three years. At least, if everything goes according to plan.

That also assumes that everything goes according to plan.

“The cost of the county’s debt service remains at an all-time low as a result of prevailing low interest rates,” notes the budget document.

In fact, rising interest rates have led the Treasury Department to forecast home sales to fall by 22.2 percent this year, 7.1 percent next year, and then remain stable from 2024 to 2026.

Even then, the yield forecast is relatively conservative: Canadian 10-year Treasuries are expected to rise from 1.82 percent this year to 2.14 percent next year to 2.25 percent over the next three years.

The province also expects the Canadian dollar to remain fairly stable, with a loonie moving between $0.789 and $0.799 in the coming years.

Anything beyond the norm, including interest rates or the exchange rate, can mess up public finances.

There are many reasons for the BC government to be eager to build more houses. Here are a few:

* Canada has a relatively low number of homes per capita compared to other OECD countries;

* there will be greater labor shortages as the population ages, which needs to be addressed through immigration;

* most immigrants move to urban and suburban areas;

* more homes have the potential to dampen rising cost of ownership that has become a political powder keg;

* an increasing number of people think they will never become homeowners, so more rental stock will have to be built to accommodate them;

* if the province is going to put billions of dollars into rapid transit projects, it makes ecological sense to let more people live near those stations so they can use this service instead of driving;

* and creating compact communities results in a lower carbon footprint.

But there is another reason for the BC government to push for greater density, which is rarely talked about.

Once upon a time, people would say that for every dollar generated in BC, 50 cents came from forestry. That is far from the case today.

A similar story with natural gas revenues. They are projected to hit $911 million this year, falling to $691 million in the next fiscal year and then falling to $580 million in 2024-25.

Fuel, carbon and tobacco tax revenues remain the same. Premiums for medical services now depend on the health of the economy as employers foot the bill.

And real estate transfer tax revenues won’t even come close to the $3.25 billion generated in 2021-22. The best they will do over the next three years is $2.5 billion, according to the Treasury Department.

One of the few hopes for the BC government is that property prices will continue to rise. That way it will collect more property taxes to stop the red ink. But even that is questionable, given the recent decline in East Vancouver home prices.

A large-scale housing initiative offers a way out of the fiscal mess.

First of all, most of this would be financed by the private sector. That eliminates the need for the BC government to add to its mounting taxpayer-backed debt.

Secondly, when those homes are sold, it will fatten up the provincial treasury through transfer tax.

No one should be jealous of Treasury Secretary Robinson. Some of the old standbys — forestry, natural gas, coal, fuel and tobacco taxes — are no longer raining money to the government as they used to.

In addition, the climate crisis adds an additional burden.

One of the bright spots in BC’s economy in recent years has been agriculture. But the collapse of the hydrological cycle — brought on by rising global temperatures creating more atmospheric rivers — is a blow to farmers.

Heavier rainfall reaches deeper into mainland BC. The infrastructure there was not built to withstand that. And we probably haven’t seen the worst of mountain runoff, which has the potential to flood rivers, including the mighty Fraser.

Because old-growth forests are still registered, there is less capacity for forests to hold back the water.

The fishery is also vulnerable because rising water temperatures make it more difficult for salmon to reach the spawning grounds.

It is true that technology has been a bright light. And much of the technological wizardry is reflected in Vancouver’s world-class visual effects and animation sectors. Let’s hope they remain resilient in the face of declining box office revenues in the film industry due to COVID-19.

Then there is the impact of COVID-19 on tourism, another economic mainstay of BC. It’s hard to imagine it ever returning to its pre-pandemic glory days. With every new variant, there is the potential for future lockdowns.

Not to mention the damaging impact of Lung COVID on the workforce and its impact on health care costs.

It’s crisis time for the NDP

The BC NDP is probably already thinking about how it will be re-elected in 2024 in the face of these headwinds.

The party’s brain-confidence realizes that more spades in the ground for housing projects can keep the economy going.

That, of course, requires plenty of construction workers to be ready – which is far from certain, as the Straight away reported last month. The lack of skilled craftsmen is already driving construction costs through the roof. The supply chain problem also keeps this sector busy.

It’s not a pretty picture.

In addition, there is opposition to densification in several communities.

On May 7, hundreds gathered outside Vancouver City Hall to protest the Broadway plan. It represents a dramatic increase in density over an area of ​​500 blocks of the city in the general vicinity of Vancouver’s latest SkyTrain expansion.

Tenants feel vulnerable, despite Mayor Kennedy Stewart’s recent pledge that no tenants on Broadway today will see their rent rise in the event of redevelopment.

He says the Broadway plan will offer a paid move to a temporary lease, where a top-up will keep the interim rent the same.

In addition, he assures these tenants that they will be given the right of first refusal to return to the new project at a rent that is 20 percent lower than the average citywide rents from the Canada Mortgage and Housing Corporation.

“For those already paying high rents along Broadway, that means you could see your rents drop once you move back into your new building,” Stewart said in a press release. “But for those paying low rents these days, I want to go even further and make sure you don’t have to worry about paying more as we renovate and expand homes along Broadway.”

It’s a delicate balancing act. Tenants have long been an important voting bloc for the NDP.

Still, the BC government essentially believes it needs to kick quite a few of them out of their homes for several years as new towers go through the approval process and are built. This is part of her grand plan to compact a significant portion of Vancouver to help pay the bills and avoid being massacred in the 2024 election.

The increased property tax revenues will also fatten the treasury at City Hall.

Why is this necessary?

To put it bluntly, the BC NDP must prevent its taxpayer-supported debt from exceeding $100 billion by the time the next election comes. Otherwise, Prime Minister John Horgan risks being chopped up for the BC Liberals under new leader Kevin Falcon.

The answer – for Robinson and Horgan – is to build as many houses as possible. Attorney General David Eby is the lead seller for this project as the minister in charge of housing. And Mayor Stewart is a willing accomplice in this endeavor.