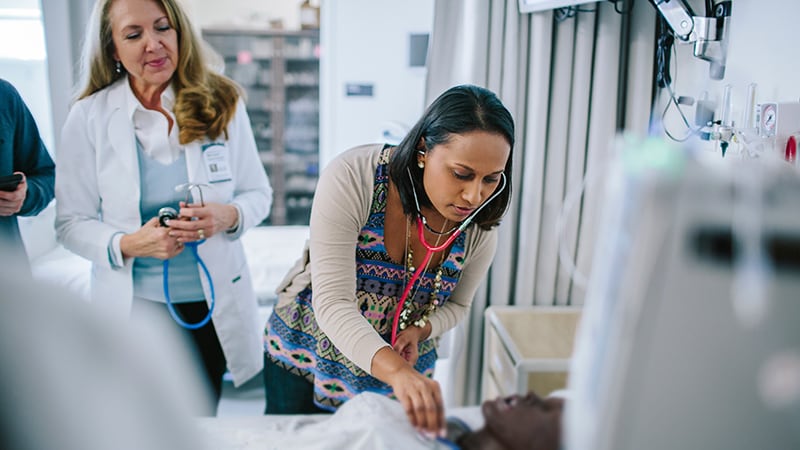 It can be difficult to create opportunities for nursing and medical students to work together during their education. Still, research suggests that this could bring huge benefits to postdoctoral practice: facilitating smoother transitions to interdisciplinary care, improving teamwork, reducing avoidable errors, and improving patient safety.

These benefits are exactly what interprofessional education (IPE) aims to achieve and why more universities and medical centers are promoting these experiences by incorporating them into curricula and clinical rotations.

“Many institutions have IPE experiences, but they are usually just a one-time, one-day simulation or clinical,” said Selena Gilles, DNP, ANP-BC, associate dean of NYU’s undergraduate nursing program. “We wanted a program where students, for more than a year, could work together every week. That is really what makes our program so unique.”

For the fall and spring semesters, the duos met one day a week for clinical rotations at NYU Langone Hospital-Long Island, where they assessed patients and planned care plans together. They also evaluated the social determinants of health that influence each patient’s optimal treatment and recovery, then presented their findings to residents, social workers and floor nurses during interdisciplinary rounds.

In the spring, the duos teamed up with pharmacy students to work on a case study for a complex patient, where they “can identify their role as a member of the team and how they can all work together to care for that patient.” Gilles says.

The interactions were impressive.

“In medical school, there’s a lot you don’t get a chance to learn or experience until you become a resident,” said Moise Romano, a medical student in the program. “Working with nurses feels like one of those things. That’s such a big part of what happens in the hospital, so it was very rewarding to get nurses’ perspectives, see what they do on a daily basis and see the details they need to know about their patients.”

When nursing student Salma Santos realized that a patient did not fully understand her diabetes diagnosis and had no transportation home, she and her medical student counterpart shared the information during rounds so that additional resources, such as a consultation with a nutritionist, could be arranged.

“The program confirmed how important collaboration and bounce [information] There were certain topics that might not have come up if nursing or pharmacy students hadn’t started the discussion, because “we all look at different things to make sure this patient is well taken care of.” . †

Interdisciplinary education first received national attention in 1972, following a report from the Institute of Medicine. However, it wasn’t until 2011 that the first standardized set of IPE core competencies and skills was released by the Interprofessional Education Collaborative (IEC), established two years earlier to promote team-based care and promote the inclusion of IPE in curricula.

Today, IPEC includes 21 national health professional associations and is expected to release an updated set of core competencies next year.

Once schools realized the importance of IPE, they tried to squeeze it into their existing curriculum, leading to one-day events highlighting the skills needed for interprofessional care, says Mark Speicher, PhD, MHA, senior vice president for medical education. and research at AACOM.

But programs have evolved as the benefits of interprofessional collaboration have become more apparent, particularly a tendency to reduce provider burnout, he says.

“In osteopathic medical students, our research has shown that affinity for teamwork and interprofessional care is related to lower burnout scores. These findings, while not completely consistent across occupations, have also been replicated in nursing.”

Subsequently, many IPE offers are now much longer than a single day, he adds.

“There are so many challenges developing a program like this,” she says, adding that NYU’s program could last at least 5 years because of a generous $7 million gift to the school. “You have to have the resources, the buy-in, and figure out where nursing and medical curricula come together and how they match up.”

Undeterred, many schools have found ways to progress and provide meaningful interdisciplinary opportunities.

In January, HealthPartners Institute introduced an IPE initiative for advanced practice providers. Because enrollment is limited to four nurse practitioner or physician assistant students, participants complete up to 12 months of clinical rotations collaborating with their peers under the guidance of a tutor.

Likewise, the Interprofessional Student Hotspotting Learning Collaborative, supported by the AAMC and AACN, is an annual 6-month program that establishes diverse care teams to connect with common patients with complex medical and social needs. Each team participates in monthly case conferences for up to four adult patients and may include students of medicine, nursing, psychology and audiology.

Since 2017, first-year medical students at the University of Chicago’s Pritzker School of Medicine have partnered with a practicing nurse in a “high-performing nursing unit,” such as pediatrics or surgery, says Tia Kostas, MD, a geriatrician at UChicago Medicine who conducts the IPE study. efforts at Pritzker.

“As medical students take clinical rotations later in their education, they leverage these past experiences to better function as an interprofessional team leader to optimize patient care.”

While the medical students often slow the nurses’ productivity, participants report feeling a sense of deeper engagement and satisfaction, she says.

“They also generally agreed that UNITE improved their understanding of the role of nurses and how nurses and doctors communicate and work together in a team,” says Kostas. “One thing that students found interesting was how nurses have so much more patient contact than doctors, and so [they] have a major role in patient education and a significant impact on patient care.”

Steph Weber is a freelance Midwestern journalist specializing in healthcare and law.