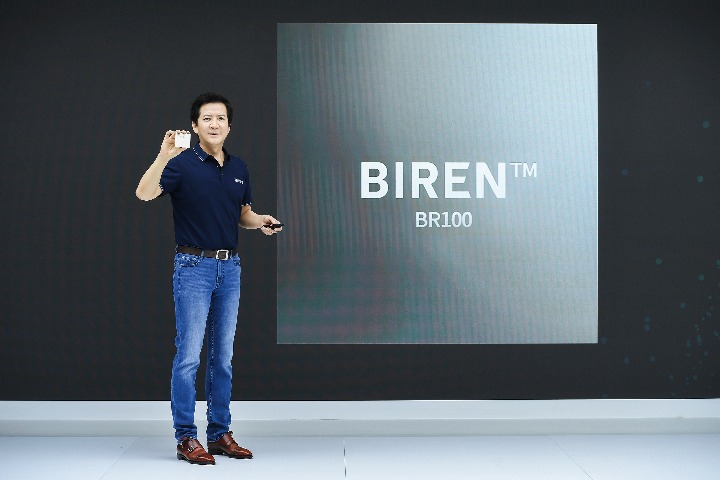 The BR100 is capable of delivering outstanding performance that rivals the GPUs of international giants, Biren Technology said.

Industry experts said GPGPUs go beyond exclusive graphics calculations and perform calculations in applications conventionally handled by a computer’s central processing unit, or CPU. The use of many video cards or multiple graphics chips further enhances the already parallel nature of graphics processing.

“This is the first time a Chinese company has been able to deliver such numbers in global general-purpose GPU computing, and hopefully this achievement will contribute to the overall development of semiconductor technology development in the country,” said Zhang. Wen, founder, chairman and CEO of Biren Technology.

Developing an ecosystem for domestically made GPUs and AI chips is extremely important, said Wang Yu, a professor of electronic engineering at Tsinghua University. “If we could build a relatively unified ecosystem that allows more users to program and run applications, chip manufacturers will benefit greatly.”

There is a rising demand for GPUs in the wake of the rapid development of advanced technologies such as artificial intelligence, big data and cloud computing, said Li Xianjun, an associate researcher at the Institute of Industrial Economics, which is part of the Chinese Academy of Social Sciences. Sciences.

China should also ramp up support for the integrated circuit or IC sector, Li said, and more efforts should be made to expand the application scenarios of GPUs used in data centers, smartphones, computers, virtual reality, augmented reality and extended reality devices.

China’s semiconductor industry has experienced solid growth in recent years, but is lagging behind in basic chip materials and manufacturing equipment, Li said, underscoring the importance of independent innovation.

According to Hong Zhou, co-founder and chief technology officer of Biren Technology, the BR100 is the result of a chiplet-based design in which a single chip is broken down into multiple smaller chiplets or independent IC blocks that together form a large and complex chip. .

Chip manufacturing is evolving to embrace increasingly difficult designs and more complicated processing. This, in turn, causes costs to continue to rise, according to a research report from Everbright Securities.

Against such a backdrop, chiplets are gaining importance as they can improve productivity and yields, reduce design complexity, and lower the costs of both design and production.

A report from Zheshang Securities expressed a similar view, noting that chiplets, as an important replacement for conventional chips, could open up new opportunities for the domestic semiconductor industrial chain.