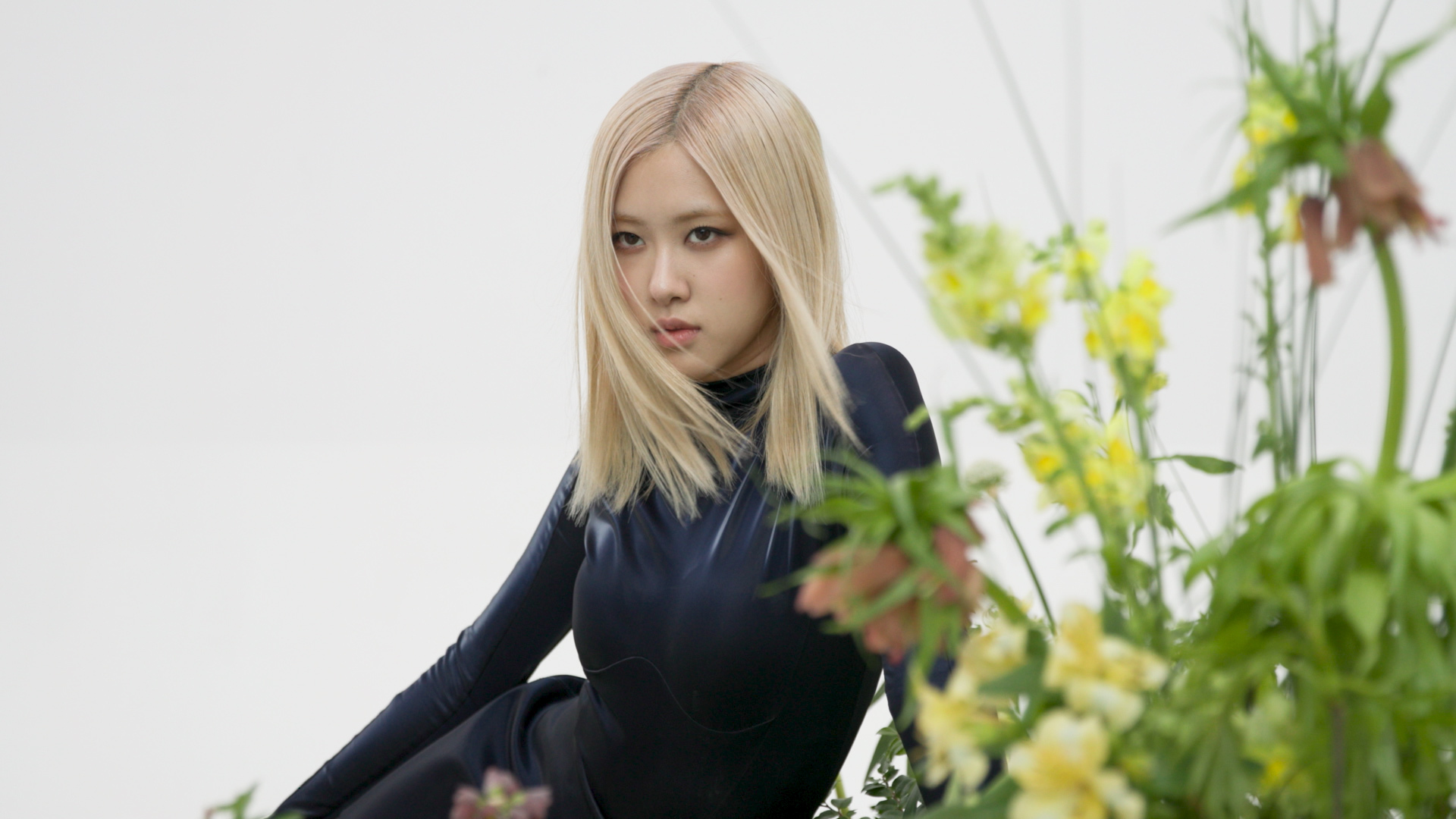 Rosé has been juggling different personas all her life. Born to Korean parents in New Zealand, Roseanne Chaeyoung Park grew up largely in Australia, comparing her childhood there to Hannah Montana’s double life: she was the Korean Chaeyoung at church on Sundays, she attended services with the other immigrants. During the week she was the Australian Roseanne at school. Behind the Blackpink persona, she says, “I don’t really do too much. I live a very quiet life. My mom comes to my house…that’s about it.”

Now she’s trying to reconcile the more down-to-earth woman less people know with her public self – the guitar playing, high-note-hitting singer with the “golden voice,” as fans like to say, the star whose 2021 single “On the Ground” (the lead track from her solo release, R) both topped Billboard‘s Global 200 and Global 200 Excl. US charts, making her the first K-pop soloist to do so. “I try to bring those two worlds together in the middle,” she says, munching on fried rice at the pho restaurant in YG Entertainment’s headquarters. “That bright [Rosé] persona – it’s nice when that happens, when I can turn on this completely different character.

(To celebrate Blackpink’s appearance on the cover of Rolling Stone, we’re publishing individual digital covers featuring each member of the group; check back this week for more information.)

What was the pandemic like for you when everything stopped?
Oh, it was terrible. I have never felt so relaxed in my life, and it was the worst. I was sick at one point – you know, things your body goes through when stress hits you? I have the shingles. It came to me that I did not know what to do in a life without work. I was clearly a workaholic. I couldn’t bear to see all our diaries suddenly empty for the next two to three months. I started thinking, “What if by the end of this pandemic people aren’t interested in me or us? What am I going to do for the rest of my life?” I don’t know why I thought that Now that I think about it I’m so dramatic Why am I so dramatic?

How did you use that empty time?
I used that time to get to know myself better. “How do I handle myself? How do I handle myself in a room that is quiet?” I think a lot of people can really do something with it. I was extremely outgoing back then. It was time for me to tune in to my inner self, act like an introvert. I’ve created a kind of introverted personality – I remember being in a big room with a bunch of people, and I wanted to go home for the first time. “Wow, is this what introverts feel?”

Was music something you were drawn to as a child, without thinking?
I think so. We had this really old piano that was handed to us by our aunt – she’d had it for 10 years or something. It was faded brown, very dull and dull, but it worked. He was always in the living room. We had classes growing up – I hated them. I cried because I didn’t want to practice. The teacher was really scary.

Oh God, even in Australia, Korean parents forced their kids to take piano lessons?
Of course of course! I lived a very normal Korean life. I remember saying to my mother one day, “I don’t want to take any more classes.” She agreed. I was so surprised. I learned to play basic chords. So that was enough to be an instrument for my singing. The internet was so slow back then. In the morning we woke up and if we wanted to watch a movie, we clicked on ‘download’ and we had to wait two days. But the piano: we don’t need to charge it. We could play it on the spot.

My parents were always at work – surprisingly I didn’t really hang out with friends much then. My friends all lived quite far from me. My sister would study. I wouldn’t have anything to do. I would watch TV for three hours, and by the end I would be bored, so I started playing the piano, until my parents literally said, ‘We need to sleep now! Can you be quiet?”

Tell me about a time when your parents said, “Rosé! Stop singing and go to bed!”
Actually, I remember them saying, “Oh, Rosé, why don’t we go to sleep now?” But later, my sister told me, they met upstairs in my parents’ room and discussed whose turn it was. [was] go down to tell [me] fuses. They rolled their eyes, “Oh God, she doesn’t know how to stop.” I knew nothing about that! They didn’t tell me. I mean, it’s so much fun when you think about it. Thanks for not crushing my dreams of becoming a superstar haha.

What do you remember about your childhood home?
It was a normal two-storey house. We had a backyard, a dog. Many elderly people lived around us; it was not a youthful neighborhood. It was very quiet, very friendly. We were a quiet Asian family. There were many lizards. We woke up and put our shoes outside; there would be little lizards in our shoes. Little lizards, big cockroaches – I’m still terrified of them.

Let’s talk about music. You are serious about your craft. There’s all this noise, photo shoots, interviews, the spectacle – but music is what matters.
As corny as it sounds, it’s true, absolutely. It starts with my love for music; that’s what makes me happy. It’s like a feeling of – what do you call it? — healing. It’s something that calms me down during the day, it stops me from thinking. But with that I can do all these great things. Photo shoots! Sit in front of the television [cameras]† It’s really fun and I’m so grateful that I can do these things. But then I forget the music. I forget to sit down and pick up my guitar and sing.

During my free time I started to realize that I just love to sit and sing. Recently I started picking up the guitar again. I hadn’t done that in the past two or three months – I was preoccupied with life. But I had a few days when I had nothing. I hadn’t planned anything. I just decided to stay home and see what happens.

You and that empty room.
Yes, actually! I even told my mom that I want to be alone for the next few days. So she didn’t come. I started sorting out my guitar. I sang a few songs that I liked. I wondered, ‘What would it be like if I could sing that? How would I sing that?” And I started to sing. I enjoyed it. I turned on my iPad – I did this in Australia too. iPads were just starting to come out, and my dad gave me an iPad, and I remember doing the same thing — and recording myself. It was fun. As corny as it sounds, I do like music.

You have high standards and sometimes you are hard on yourself. Is this drive to get better sometimes a heavy burden?
Secure. Sometimes I look at someone who is very confident, and I admire that. I wish I was like that too. I’m very insecure about it, but only because I care so much about it. I have so much respect for it. Yes, it burdens me sometimes, but I really do my best to overcome it. Confidence is something I work on every day.

Insecurity is not a negative thing – it is one of the most powerful drivers of good art. Tell me how you make yourself vulnerable to music.
I think I’m just vulnerable! I’m starting to realize how sad it is to live without tension. In the past, if I was nervous, it would weigh me down so much, because you just want to be relaxed, right? But being nervous about something, really caring about something is what makes life so interesting and fun.

What made you think of all this?
Why am I crying? Oh my god, so weird. I’m very sorry. I hate myself for this, this is so funny. This is so weird. Oh my God. What made me think that? It’s been, how many years ago we started Blackpink, six years? So it is high time to start feeling comfortable in certain environments. I think a good sense of comfort and a good sense of vulnerability is always good. I also really enjoy that feeling of vulnerability and really wanting or desiring something – I really enjoy that feeling. So I don’t want to lose that anymore.

Are there any artists you are jealous of these days?
Recently I went to a Dua Lipa concert. She sang live. Wow, this is – I was like, her voice is – her voice, just, it was amazing. She was so good. I was amazed. I took a lot of notes. I was definitely fangirling.

You released your first solo singles, “On the Ground” and “Gone” last year, to great success. What was it like to be alone, without your bandmates?
It was quite a challenge – that put me in a more vulnerable position. We are four as one. We’re there for each other, and if one person can’t be in their best shape that day, we’re there to fill that other person in. Standing alone was scary. It made me realize how much Blackpink has been a great support to me in the past. If I didn’t know what to do, I called them to ask what they felt, what their opinion was. So they were always there during my solo work.

Tell me about the text “All I need is on the ground.”
This line was originally written by the song’s producers. That’s what struck me and my producer the most. We were drawn to this song by this phrase.

What is “on the ground” to you?
Just us as humans. A year and a half ago, maybe two, I remember we ate. There were four of us and Teddy. We were just hungry people – we got to the restaurant, very hungry, and the food was really good. This is what makes us feel like humans. Just us, eating with the people we love. It feels like family, that makes us happy. At the end of the day, you have to sit down and remember that all we need is – the most normal things we do, going out with the people we love, doing things we love.

Music can be great, and that’s very exciting; we love that because it creates a movement and we can bring people together; we can enjoy and celebrate life together. But then: ‘How did we get here? Rosé, what does music mean to you?” Everything I need is on the floor. It’s where I started.