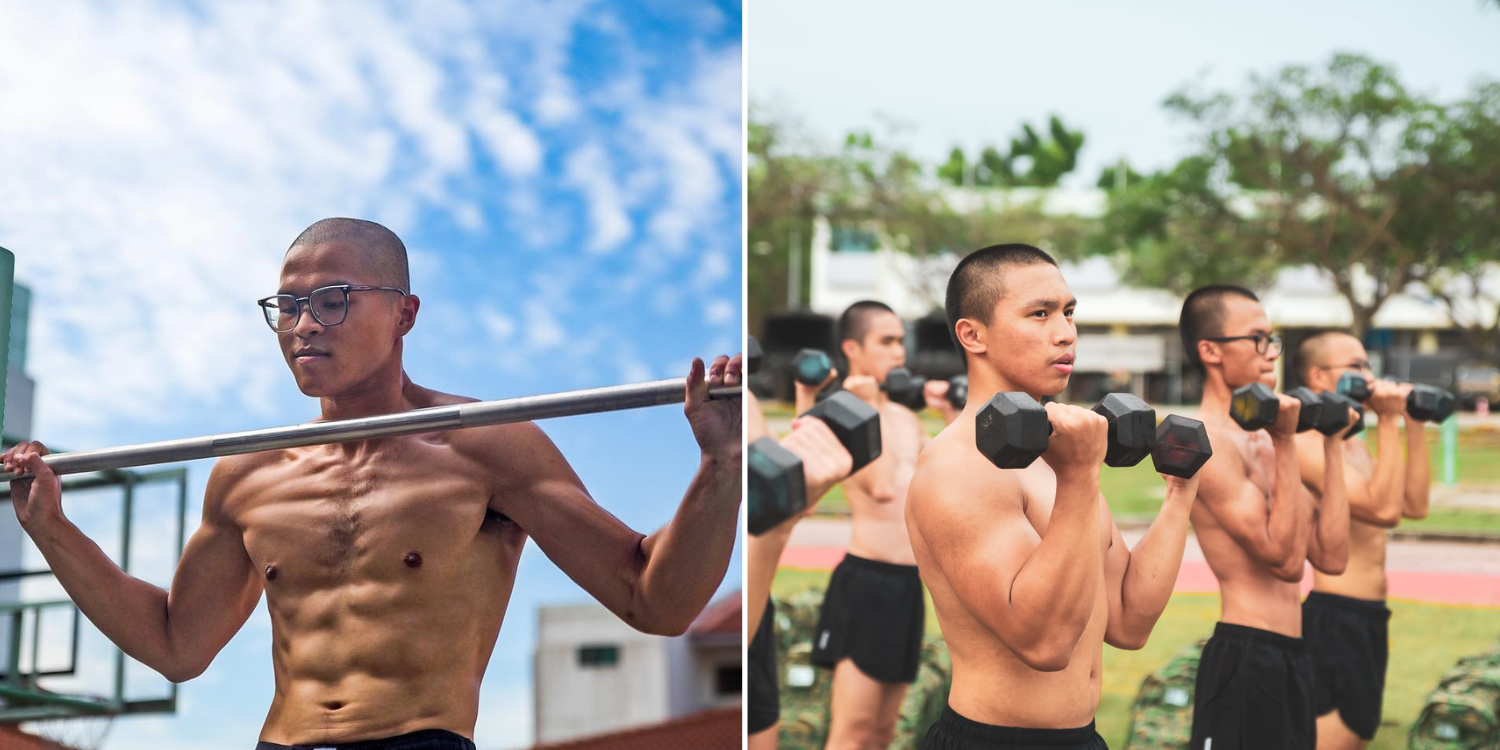 In a way, SAF’s Basic Military Training (BMT) in Pulau Tekong is almost like a physical transformation journey, as recruits who go through the heavy training program tend to gain muscle mass and look much fitter than before.

While this may be common knowledge, some people were still shocked to see recent photos of recruits exercising as part of their BMT. Two recruits in particular got the most responses, perhaps because they looked like they’d been through the Avengers boot camp.

Some netizens tried to unravel the secret formula behind their ripped physiques and even wondered if the recruits ate special meals at BMTC.

On Friday (July 22), an internet user posted a compilation of photos to the Complaint Singapore Facebook group, showing SAF recruits at work in numerous poses.

The photos that attracted the most attention were of two bulky recruits trying pull-ups.

The pull-up bar may discourage some of us, but this recruit seemed to approach him with a smile, tensing his chest and abs. 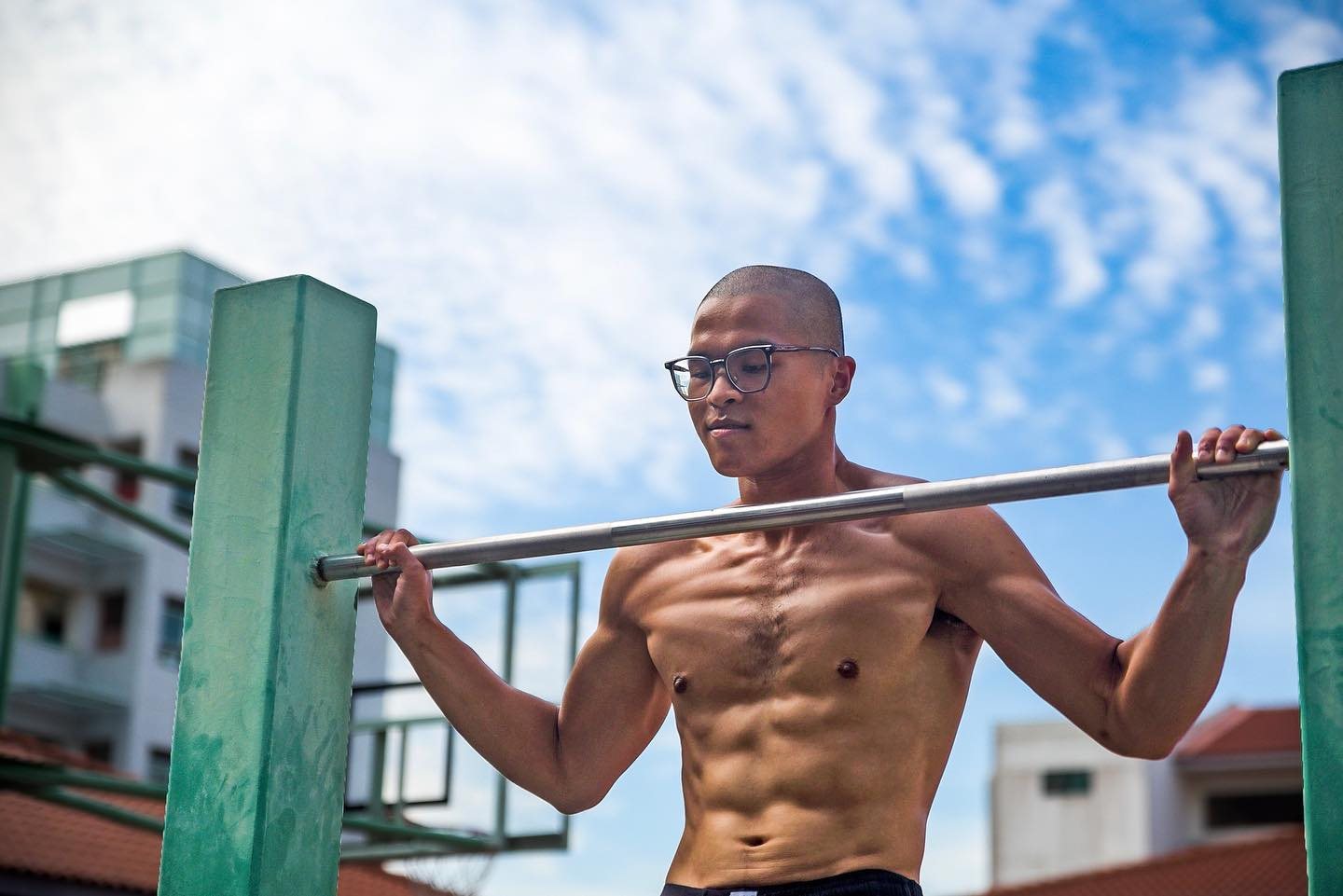 Aside from his chiseled physique, his calm facial expression makes the pull-up look like a walk in the park.

Another recruit had a similarly cheerful demeanor while pulling up, which is a far cry from the pained expression some of us may have while attempting the exercise. 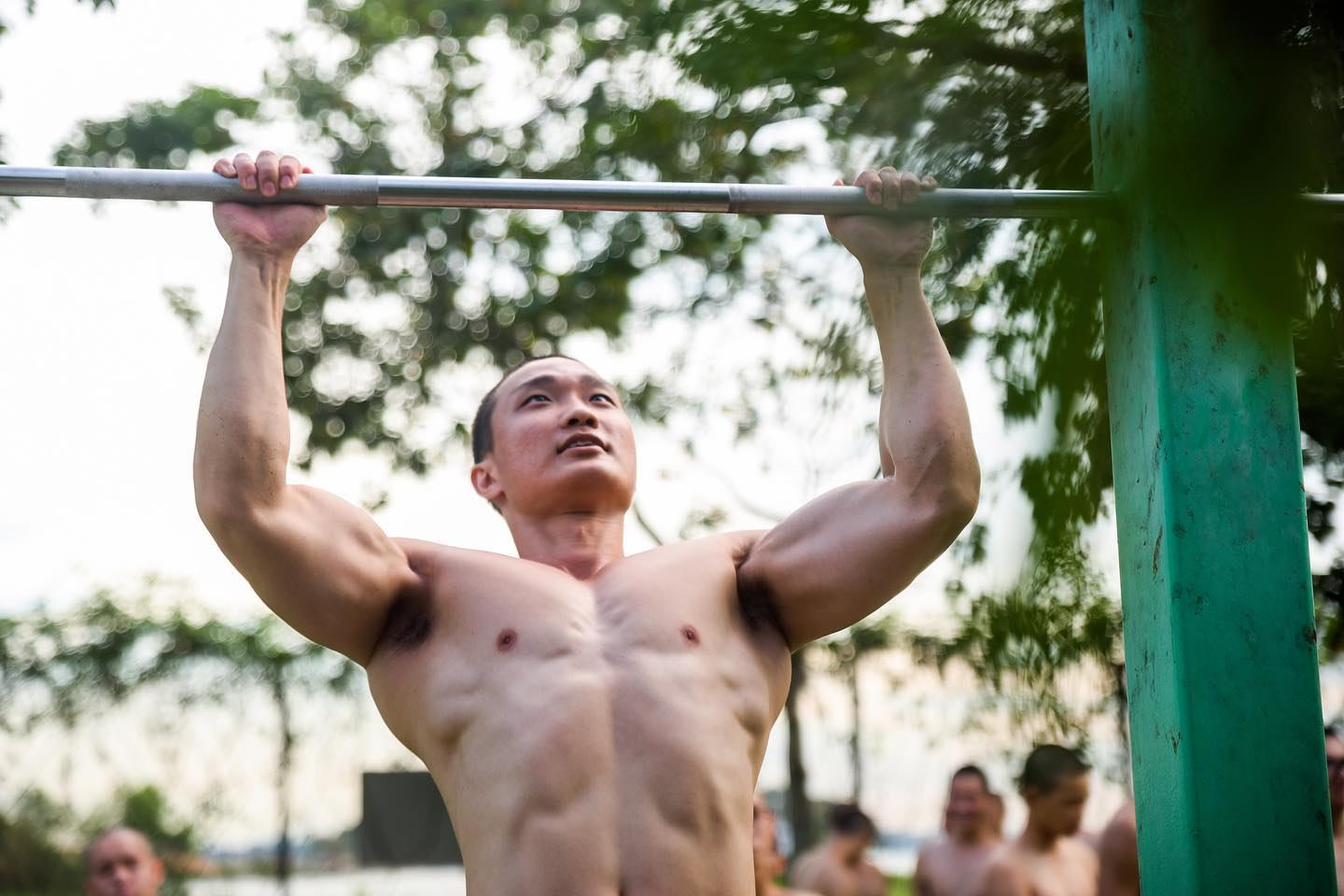 A Facebook user eventually joked that perhaps the recruit was holding the bar up instead of pulling himself up.

While pull-ups are the best way to show off their physique in all its glory, that wasn’t all the recruits did.

A group of them also performed weight exercises, lifting rather heavy-looking dumbbells with both hands.

While the gear looks quite heavy, we won’t blame you if your eyes are glued to the recruits’ guns instead. 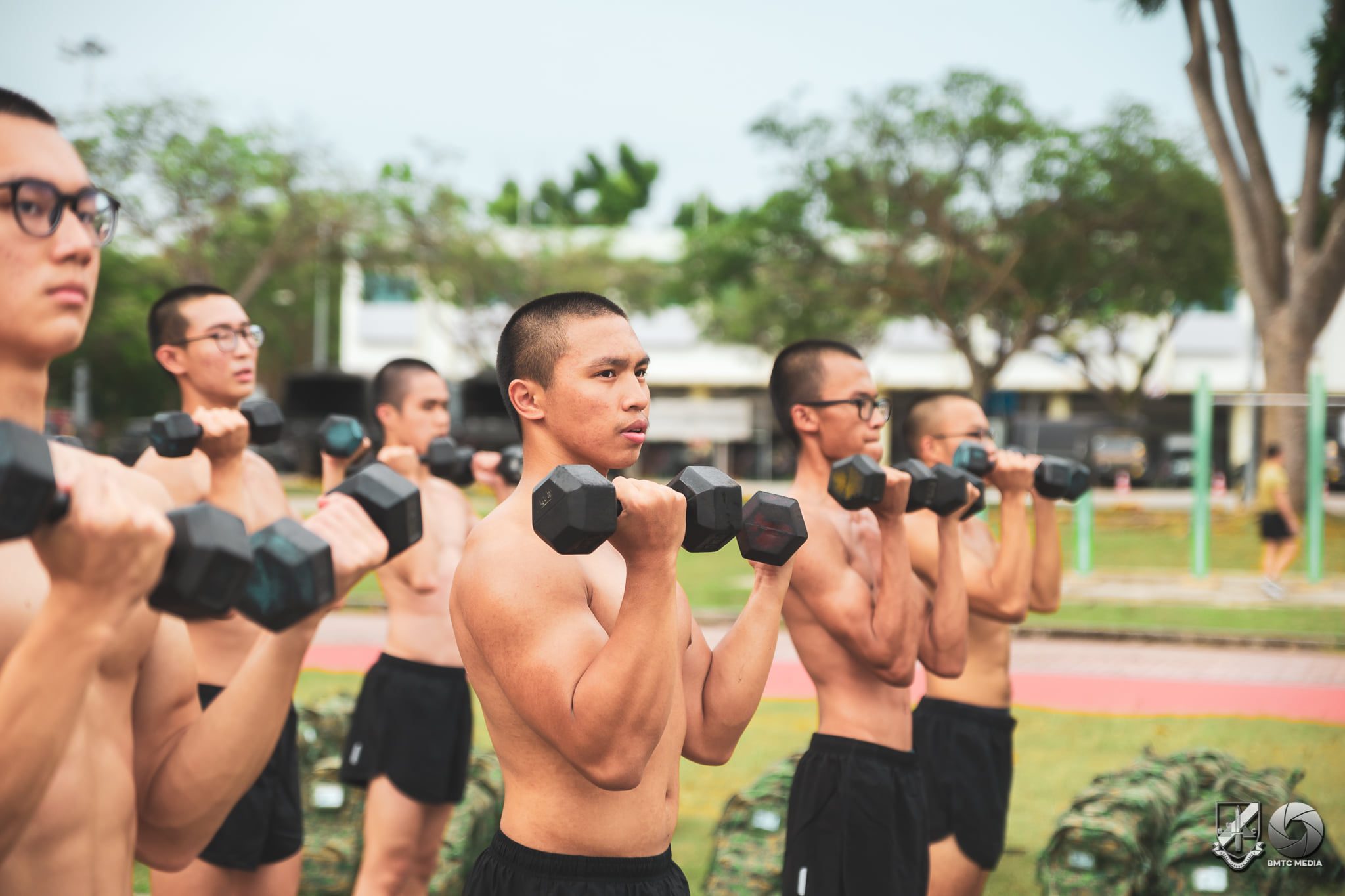 Getting in shape isn’t all about building arm strength, of course – some recruits were seen doing bodyweight exercises, which could give them their six-pack, like this young man below: 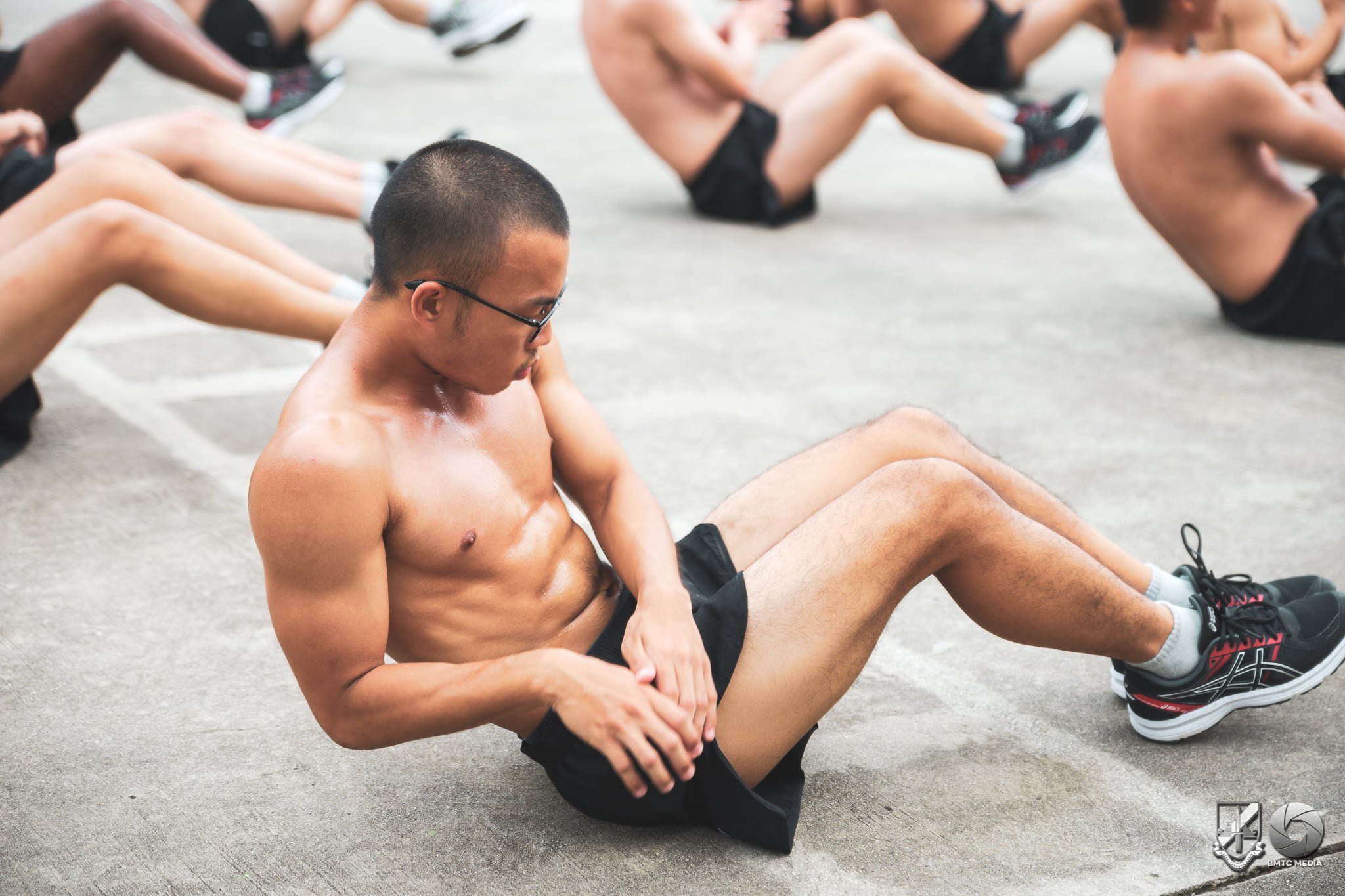 Now the rest of us are starting to wonder if we can sign up just to reach our fitness goals.

The Facebook post featuring the eager recruits has amassed nearly 400 shares at the time of writing, with many users sharing their thoughts in the comments.

The comment that took the cake was from the OP, who wondered what SAF has been feeding their soldiers lately.

Meanwhile, these netizen speculated that the recommended recruits must have been quite muscular in the beginning.

Some also pointed out that such recruits may not be representative of the entire cohort.

The shared photos come from the Facebook page of the Military Base Training Center (BMTC), which often gives the public an insight into the training of NS recruits.

If you’d like to see more such images, check out their page here.

BMT helps recruits prepare for their two-year stint as soldiers, during which they will be tasked with protecting Singapore.

For combat fit individuals, their duties may require a degree of physical fitness for which we are sure the training in BMT will come in handy.

Aside from physique, we hope the recruits enjoy their time in BMT and form meaningful and lasting relationships with their fellow soldiers.