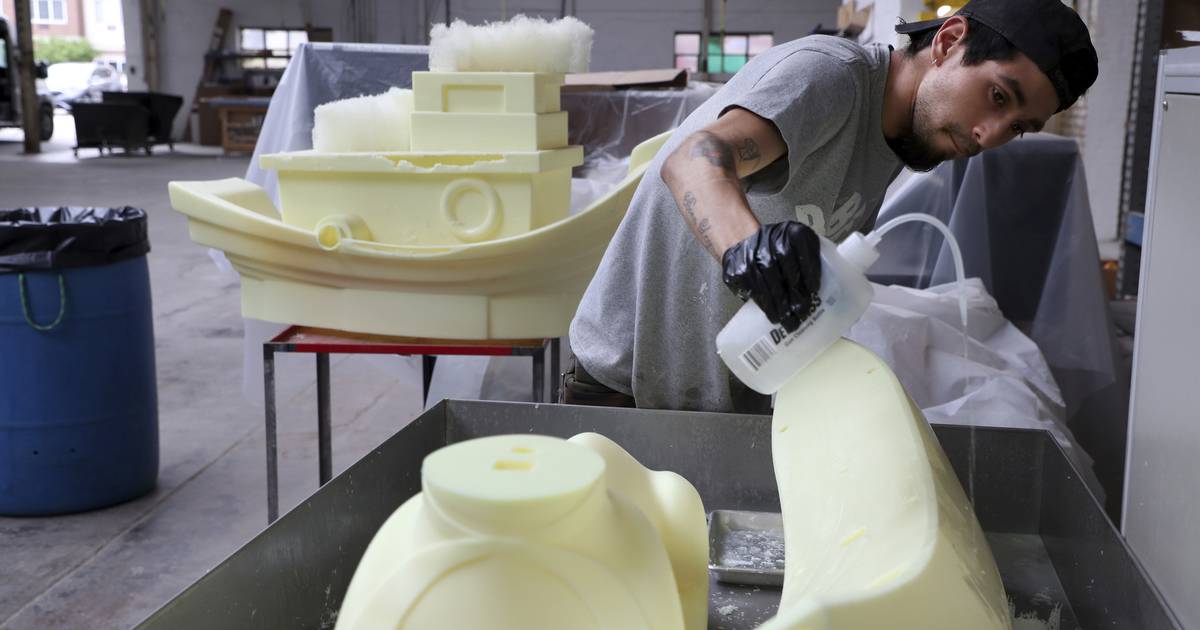 In McKinley Park, a building sits across the street from a vinegar factory, decked out with colorful artwork depicting characters and scenes from the “Street Fighter” and “Mortal Kombat” video game series.

Aside from the murals, the building itself is modest, but that’s before you realize that the people inside were behind the construction of Hebru Brantley’s iconic and colorful flying goggles sporting “Flyboy”, a 16-foot statue erected at the Chicago Children’s Museum. at Navy Pier in May, and helped establish the Color Factory, an interactive art museum in Willis Tower this summer.

Welcome to Bridgewater Studio, a fabrication studio opened seven years ago that does custom work for private clients, cultural institutions such as the Field Museum and WNDR Museum, and other location-based entertainment venues.

In June, Bridgewater worked on materials for the immersive King Tut exhibit for National Geographic in Washington, DC, which will then move to Boston.

“Like stagehands, we are often very behind the scenes,” said Patrick Justice, Bridgewater Studio partner and vice president of production. “I always say to people, when you’re in the world and ask ‘how do you make something like that?’ It’s a company like ours.”

When you walk into one of the studio’s two production buildings, a stone’s throw from CTA’s Orange Line, you’ll hear a buzzing/buzzing noise. Walk further back and you’ll find that it’s a machine that cuts a huge block of Styrofoam into a vase that will be used for an exhibition in Boston around King Tut. It’s a sight to behold that A) Styrofoam is this big and B) a machine that looks like it could be used on a conveyor belt to make cars can create precision art that’s both historically accurate, lightweight and transportable. In other parts of the space, employees go through other projects, including hand-refining the appearance of a sphinx made of yellow resin (which looks like butter).

“We’re dealing with really cool projects,” said Eric Cup, Bridgewater’s president and CEO. “As we’ve grown, we’ve gotten involved in more high-profile projects that more people get to see. I still get a kick out of seeing what we did for ‘Shameless.’”

“Yeah, we’ve been working on that for six months and it’s on the screen for 10 seconds,” Justice said.

From crafting the inside of a spaceship for Amazon Prime Video’s “Night Sky” to a realistic-looking resin bear made for public hugs for a local brewery to promote their new IPA, Bridgewater Studio’s work has run the gamut since they came in. to exist.

“They said, ‘Can you make us a bear that looks ultra real?’” Cup recalls. “I said ‘yes, absolutely, how many do you want? They said one. Excellent. Then I turned to Patrick and I said ‘how are we going to do this?’

“That’s how many of our jobs start,” Justice said.

“That’s part of the fun,” Cup said. Justice laughs at having to research furry websites to make sure the look was right. But the piece came together with success.

“We did it in two parts – the head, because there’s so much detail, we 3D printed it and made it from head down from foam on the robots and then we lined the whole thing with faux fur and they were there fond of. “

Robotics specialist Neil Hamilton uses CAD software to program the robotic machines to do what they’re supposed to do, cut in the right places and trim with the sophistication he said it should do.

“These machines… you’ve seen them in car factories; they are set up to perform one task 24 hours a day for 10 years. Ours do something different every day, every shift, twice a day,” Cup says. “Everything we do here is a new adventure. All our customers come to us with a unique set of parameters. And we have to solve all these challenges as part of our process, which is actually one of the things we love the most because it’s problem-solving. It’s different every day. Even though we may have made similar things, it’s rare that we make the same thing multiple times. That way it stays fresh.”

If anything has to be forged in resin, Bridgewater has two massive 3D printers that have been running non-stop since they got them earlier this year. Tanks filled with approximately 1,500 pounds of liquid, light-sensitive resin each help make these projects a reality.

“A good analogy would be if you take a picture and then move it down a little bit and every time a picture is taken it adds a little bit,” Cup said. “It’s a light process; the laser is a flash and that flash cures and solidifies the resin.”

Hamilton came to Bridgewater with a mechanical engineering background. It took him eight hours to program the code to cut the vase out of Styrofoam. He said he was looking for jobs with air compressor manufacturers before finding his home at Bridgewater. Hamilton didn’t want to keep making the same widget in hundreds of different ways. He wanted something cooler. He has been with Bridgewater for four years now.

“When we hire people in this industry there are a lot of career opportunities that align with what we do, but it’s not like going to a welding school where you have a very clear career path or trajectory to get here,” Cup said. “Someone who likes what we do is usually interested in a lot of different things and can’t find that job that keeps them engaged.”

Patrick agrees. “We have welders and carpenters and electricians and graphic designers, people with engineering backgrounds, CAD backgrounds — many disciplines intersect with what we do,” he said.

Hamilton worked on the Flyboy statue and programmed the robots to carve the larger body from a 10-foot-tall statue. Hamilton said the smaller figurine was 3D scanned and fitted with a skeleton so it could be posed. Once the look of the smaller model was achieved, the figure was scaled up and the studio team had to build the statue in sections.

“It’s very much like a human. It has metal bones that support the whole thing and make it go together because it’s too big to ship as one piece,” Cup said. “It’s all bolted connections… the seams and joints are sealed so it doesn’t fill with water inside. The natural break lines, the bottom of the shirt, where the shoes meet the trouser legs, and the torso and head, they’re all bolted together so it’s easier to assemble and when our painters were working on it – not scaffolding, but something that is on the ground.”

“It needs to undergo a structural engineering review,” Justice said. “We needed a 4,000-pound counterweight on the bottom so it wouldn’t tip over or slide over the pier.”

When asked if they will be ready for another Hebru statue. Cup said it’s “quiet, quiet.”

A company that started in the West Loop living room of Cup with Justice – two people with degrees in theater – now has more than 50 employees and operates in 60,000 square feet of manufacturing space.

“It grew quickly and organically because we love what we do,” Cup said. “It’s very much like a theater show because there’s an opening day. If you’ve spent a million dollars on a shoe campaign that revolves around a specific event like the All-Star game, there’s no ‘we’ll be there tomorrow’, the event is over.”

With the ability and flexibility to expand and contract as business needs demand, Justice, a resident of Ferguson, Missouri, said they often do up to a dozen jobs large and small at varying stages from a few days to months.

Cup, a resident of Pittsburgh, is proud of Bridgewater’s growth and their formula: Do a good job. Provide fair prices and be easy to deal with. Prior to the pandemic, the company held internships for young people to learn about the many facets of manufacturing. Many Bridgewater Studio employees live nearby and enjoy learning on the job while contributing their expertise to strengthen the team.

Yasmin Panjwani found the company on Craigslist. As a photography hobbyist with a background in graphic design and film, her past translated into her position at Bridgewater as head of the graphic design department.

“Community involvement, making an impact with what we do is also very important to us,” Cup said. “If you want to sit on a factory line and pump out widgets, this is the worst job you could ever have. But if you like coming to work every day and being challenged, ‘how do you make a giant sculpture?’ this is the best job.”

“As we have grown, in addition to the coolness of the projects, there is also the composition of our team,” said Cup. We are really proud of our team. If we use a sports analogy, we have a place kicker, but in an emergency (others) will run out and be the quarterback. It’s nice to see that dynamic. I think ‘what if we didn’t do this?’ And these 62 people would probably never have met.”

It’s a group that Cup and Justice say is “a team of misfits and madmen under one roof, including ourselves.”