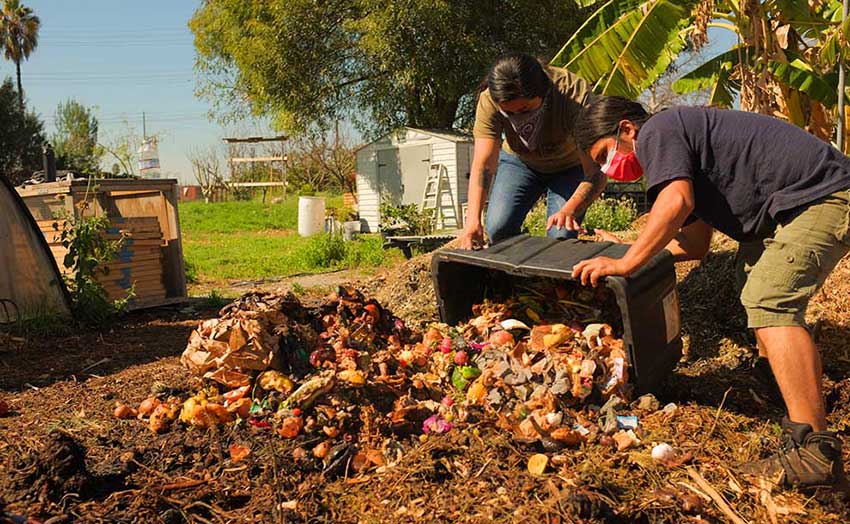 Senate Bill 1383 now asks that we all start working with our own kitchen and garden compost, instead of sending it to the local landfills. It’s a message that organic gardeners have always preached.

It seems Michael Martinez, founder of LA Compost, is a man who is in the right place at the right time.

When Michael Martinez studied Primary at Azusa Pacific University from 2006-2010 with plans to become a youth pastor, he had no idea that he would eventually become the Los Angeles County composting evangelist.

But as the founder and executive director of LA Compost, that’s exactly what he is today, and he’s spreading the word about how decaying food scraps are essential to healthy soil.

His path to founding LA Compost actually started in Miami, where he moved after graduating in 2010 to teach fifth grade as part of Teach for America. “One day I was teaching a class about seeds and trees and one of my students was eating Flaming Hot Cheetos,” said Mr. Martinez. ‘He asked ‘so, where do these come from?’ That’s really how it all started.”

Instead of lecturing on fresh versus processed foods, Mr. Martinez to show his students where real food comes from. With nine of the fifth graders and a few spades, he started a gardening club and undeterred by the fact that none of the kids had any gardening experience, he built the school’s first community garden. After a few weeks, the club grew to more than 40 students in addition to people from the neighborhood.

“Everyone really enjoyed being a part of something bigger than themselves,” said Mr. Martinez. “They had a real sense of appreciation for what they were growing.”

For Mr. Martinez, the experience cultivated dual passions. One of them is teaching. When he returned to LA, he enrolled in graduate school at USC, where he received his Master’s degree in Education in 2013.

The other passion is composting. mr. Martinez saw food scraps being wasted in landfills and waste disposal plants, while soils everywhere were depleted due to lack of food the food scraps could supply. He wanted to stop the waste, make composting a daily and widespread practice and reconnect people to the food cycle that is central to healthy living.

Once he graduated from USC, Michael and his brother, David, launched LA Compost as an all-volunteer (read: family and friends) business. The volunteers focused on Covina, West Covina, Whittier and Baldwin Park and rode bikes equipped with trailer carts to coffee shops, collected leftovers, turned them into compost in their backyards, and then gave the compost away at local farmers’ markets.

The effort was – and still is – of great significance to Mr Martinez. “What we preach when we talk about the compost is how all the scraps and ingredients in the pile are a reflection of the community,” he said. “What compost does is there is something imperfect and incomplete, just like all of us, and all the scraps come together to make something that is whole. Wholeness is only achieved when we work together towards a common goal. A common good. There it goes actually about.”

The message has resonated with supporters, allowing LA Compost, a composting collective, to grow. In late 2013, shortly after LA Compost completed the process of becoming a nonprofit, it received its first grant: $10,000 from Fellowship Monrovia Church. It used the money to develop its first community composting center at Monrovia High School, where residents could drop off their food waste for composting in professional bins; the compost was then used to enrich the soil in 10 raised garden beds built at the school and maintained by students.

With various grants to support the work, the nonprofit now has 8 full-time employees and 12 part-time employees, operating 30 composting hubs across LA

They appear every Tuesday at the Highland Park Farmers Market on Marmion Way, where residents can drop off their kitchen scraps. “The compost is given away to community members to use, and much of it stays in the community hubs so they can decide how to use it,” Martinez says.

Building a human network of composters

“Success is figuring out how different departments in the city and different community groups can work together to provide more sustainable solutions for Angelenos,” he said. “Our goal is to continue building that human network of composters in Los Angeles.”

“The compost sold at the Highland Park market goes to Regional Compost Hubs, located near parks and urban farms,” explains Martinez. Most of the Highland Park compost is processed at the Griffith Park Regional Compost Hub. LA Compost offers bilingual resources, compost materials, and an overview of upcoming events on their website lacompost.org. You can stay informed of upcoming events via their instagram.

Christopher Saddle is the author of the new book Urban Survival Guide, available at www.SchoolofSelf-Reliance.com.

Christopher Nyerges is an educator, writer and reporter. He is the author of nearly 2 dozen books, including “Extreme Simplicity: Homesteading in the City” and “How to Survive Anywhere.”

Colorado Boulevard is your go-to place for illuminating events, informative news, and social life for the greater Pasadena area.
We strive to inform, educate and collaborate to make a better world for all of us, locally and globally.