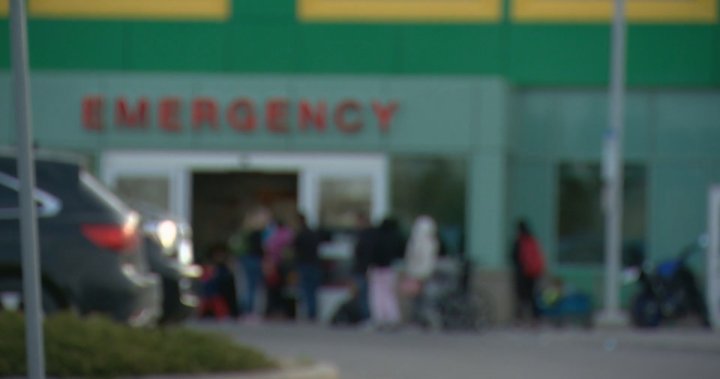 On Monday and Tuesday, long lines of parents and sick children showed up at the Alberta Children’s Hospital emergency room.

A parent told Global News that waiting for emergency care for her child was “overwhelming.” Another parent said they waited in a shorter line for five hours on Wednesday.

During the COVID-19 update, Health Minister Jason Copping admitted that the hospital system across the province is under strain.

“We are seeing the equivalent of another winter spike in patient volumes, especially in EMS and emergency departments. The figures generally remain in line with previous years, but the occupancy rate of a few large locations is well above 100 percent,” said Copping.

The need to isolate patients with flu-like symptoms consumes much of the interior space in hospitals to allow safe distance.

“And while some periods of very high occupancy are normal, this is not a normal year,” admitted the health minister.

“I think we’re actually seeing a bit of a combination of what we were worried about in the fall of 2020 or the winter of 2020-2021, which is that COVID would peak at the same time as flu peaks, just like other childhood viral illnesses, like bronchiolitis, for example,” Freedman told Global News.

While fears of what would happen in hospitals with coincident waves of COVID-19 and flu were never realized, Freedman said the lifting of most pandemic public health measures has set off a “perfect storm.”

“What we’ve seen this spring — which is an unusual time — is a late wave of flu coupled with very high cases of COVID circulating in our community.”

Chief Medical Officer of Health Dr. Deena Hinshaw used the weekly COVID-19 briefing to provide an update on the late arrival of the flu season.

“We are experiencing an increase in seasonal flu with levels that are higher than at any time in the past two years,” she said.

“That combines to create a bit of a perfect storm in terms of numbers, volume and sharpness,” Freedman said. “Also coupled with the fact that a lot of kids haven’t seen many viruses for two or three years, so they are now more prone to getting sick and being sicker with the viruses they get.”

The emergency room doctor said there is “clear” a link between the lifting of public health measures and the increased circulation of COVID-19 and other respiratory viruses.

This results in longer waiting times when parents take children to the emergency room.

“The families I’ve seen have been waiting for eight or nine hours. They are incredibly tolerant, understanding and grateful to be seen when they are seen,” he said. “But we need families to realize that it can take a while before children with lower acuity presentation are actually evaluated.”

While Freedman hasn’t looked at the data tracked by AHS to break down the ages of patients coming through the children’s hospital emergency room, he has noted some trends.

“We’re definitely seeing more kids in the age range of two to five with respiratory illnesses who are more unwell than we would normally see at that age with these types of illnesses,” he said.

Freedman said croup, a disease that usually affects children under the age of two, has occurred in children between the ages of four and seven.

He also noted that many Albertan children over the age of five have not been vaccinated against COVID-19. According to provincial data, only 49 percent of children ages five to 11 have received one dose and only 33.8 percent have received two doses.

Children under the age of five are not yet eligible for COVID-19 vaccines, but that could change after Moderna’s application to have Health Canada review their doses for children aged six months to five years.

And while a flu vaccine is available, Hinshaw acknowledged a wrinkle in that protection.

“We know that the influenza A virus that is currently circulating is one that is not ideally matched to the vaccine that was used this season…We know that in the past, the effectiveness of the influenza vaccine has varied from year to year,” he said. they.

Hinshaw said all known protective equipment used during the pandemic to prevent the spread of COVID-19 are also effective against the flu, such as the proper use of masks and washing hands.

Freedman and the AHS spokesperson both said hospital staff are doing their best to reduce wait times.

In an email, AHS spokesman James Wood said the health authority is working on ways to bring outside queues in.

“Our goal is to make sure all people are in and waiting as short as possible,” Wood said. “The sickest patients will always be seen first.”

Freedman also urged parents to seek medical attention from their primary care physician if possible or to call 811 to determine if a trip to the emergency room is really necessary.

—with files from Heather Yourex-West and Lauren Pullen, Global News