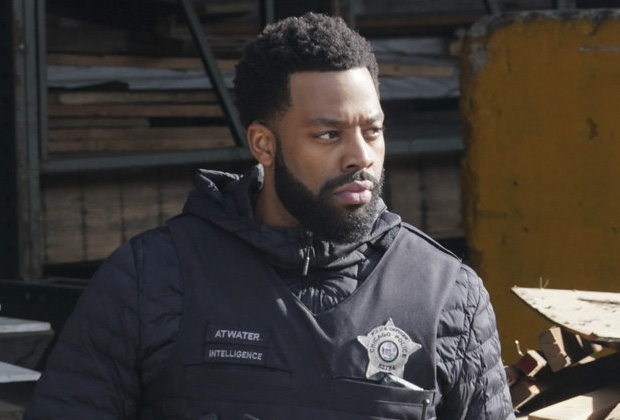 Chicago PDs Upton and Halstead are still holding up well after that emotionally charged finale (read our full recap here), but the same can’t be said for Atwater and Celeste, who split earlier this season.

On the April 22 episode “Fool’s Gold,” Atwater reached out to Celeste one last time to make amends for what had happened during their short-lived romance.

As you will remember, the couple met at a bar, hooked up and started dating. Since Celeste was a social activist who criticized the police, Atwater lied about his job and continued to see her pretending to be a commoner. When she finally found out, she was more hurt that he lied to her than he was a cop, and their relationship ended. Celeste has been ignoring Atwater’s calls ever since.

In “Fool’s Gold,” he left one last, heartfelt apology on her voicemail and decided never to bother her again. Given everything that’s happened so far, LaRoyce Hawkins, who plays Atwater, says the intelligence agent will certainly learn from his mistakes.

“Atwater definitely needs love, but he doesn’t want to force anything either. You can’t force an atmosphere. If it was meant to be, it will be,” he told TVLine. “If [Celeste] has a hard time understanding his intentions why he couldn’t be as vulnerable with her as she probably would like him to be, he has to accept that and keep growing from it… When we find Atwater in his next situation, as we If you see him play on the pitch, he will be a lot more vulnerable.”

So where does this leave them? Can we expect Celeste back on the show or are they done for good?

“Maybe,” Hawkins notes. “I can’t say if we’ll see her again. I’d like to see her again, but I’m not sure. I’m looking forward to whatever happens.”

Regardless of what happens between them, the actor says that “Celeste will always be a big part of Atwater. We’ll see her in the decisions he makes. She’s going to hold onto him for a bit.”