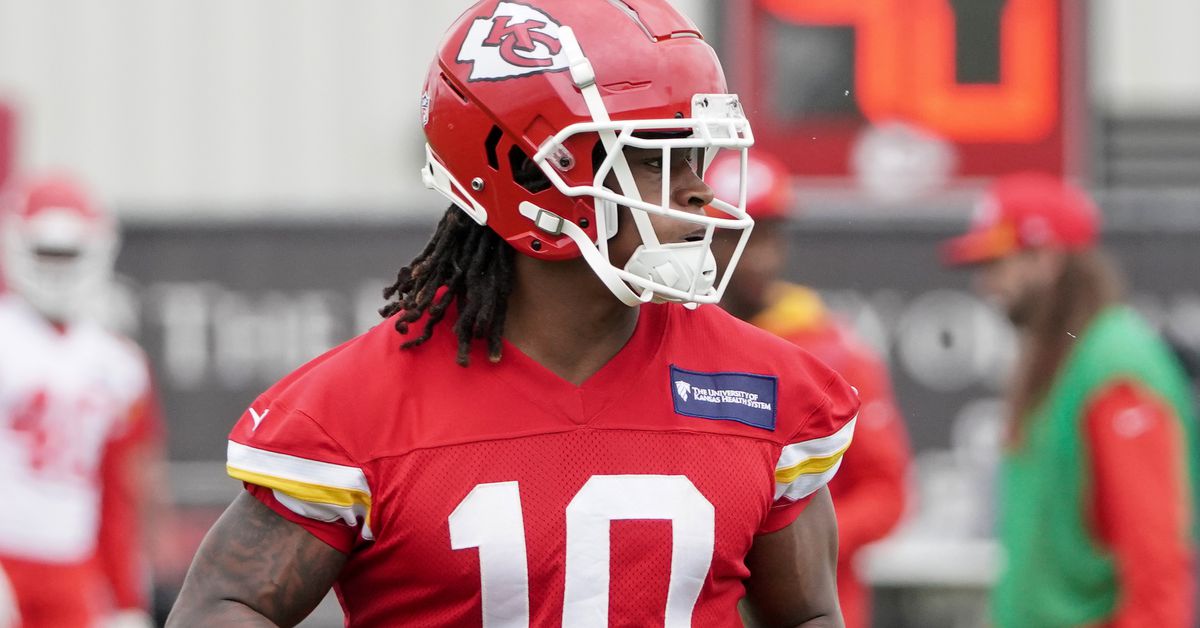 On Thursday morning the Kansas City Chiefs were back on their regular training ground at Missouri Western State University in St. Joseph, Missouri, performing their eighth full workout of the 2022 training camp.

click here to learn how to attend a training camp – and see the full schedule for 2022.

After starting training camp on the team’s Active/PUP list – where cornerback Rashad Fenton and tackle Lucas Niang still are – reserve tackle Prince Tega Wanogho was back on the practice field. While he took no reps, the defensive end Carlos Dunlap was there (finally) giving us our first look at him in a Kansas City uniform. But tight end Jody Fortson still hasn’t recovered to full training status — and on Thursday, wide receivers Daurice Fountain and Gary Jennings also missed practice with injuries.

Arrowhead Pride Editor-in-Chief Pete Sweeney was one of the other Chiefs who covered reporters and television crews, keeping an eye on everything that happened. Pete’s observations have already been published on Twitter — starting with a back to good weather.

in a 10-10-10 workout, the team goes through a lighter workout and goes through 10 offensive moves, 10 defensive moves, and 10 minutes of special teams. The attack of the first team is served by the defense of the second team and vice versa.

Asked about the hip problem from earlier this week, WR Skyy Moore said he was fine: “I adjusted it a bit, fell in an awkward way. I’m cool now, but it was only a small adjustment.” Moore became the endured the rest of that workout, but didn’t miss any days and moves well.

Moore spent time do something we’ve seen Mecole Hardman do for a long time.

The team’s newly returned left tackle was a full participant.

Orlando Brown Jr. continued to rise and it looked like he was fully participating in today’s light practice. Brown’s re-entry as the top team LT relegated Roderick Johnson to second team LT, with Geron Christian transferring to second team RT. Expect the rotations to continue on Saturday.

The team’s rookie is walking back continued to impress.

The offensive play of the day came from RB Isiah Pacheco, who fielded QB Patrick Mahomes from the sidelines. It was a 50-50 ball between Pacheco and LB Mike Rose, and Pacheco fully stretched and yanked him out of his grasp. Impressive newcomer.

But he wasn’t the only one walking back to get some work.

Running Back Clyde Edwards-Helaire took the first rep during the run period, followed by Jerick McKinnon, then Ronald Jones and finally Pacheco. McKinnon and Jones have seemingly switched their orders depending on the day.

With Fortson, Fountain and Jennings all out, other players got chances.

WR Marquez Valdes-Scantling overcame two heavy deep balls and brought in the third when he fell to the ground. Hardman was reliable all day, TE Noah Gray continued to excel in the absence of TE Jody Fortson. Remarkably, WR Cornell Powell got time with the first team.

A late round cornerback have some practice time.

Defensively, seventh round CB Jaylen Watson gets a chance against CB Trent McDuffie outside in the nickel. It was fourth round CB Joshua Williams but Steve Spagnuolo said they were simply encouraging the competition.

The Defensive Coordinator had some comments on the corner kicks.

Spags essentially commented that when Fenton’s (PUP) is done he’ll be back in that mix: “He’ll get in there and compete with that same group. He’s played good football for us, especially on the outside. We I want him just make him well and bring him back there.”

Some defensive backs made some plays.

Spags on McDuffie: “I think he’s done a great job. Now we’ll probably move him a bit too, but we need to get him in place eventually.”

Spags added that he likes that McDuffie has a short-term memory and bounces back quickly after struggles.

And finally… a note about point returnees.

Hardman continued to be joined in the point return mix by Moore, McDuffie and WR Corey Coleman.

The Chiefs will take a day off on Friday and return to the practice field at 9:15 a.m. (Arrowhead Time) on Saturday.