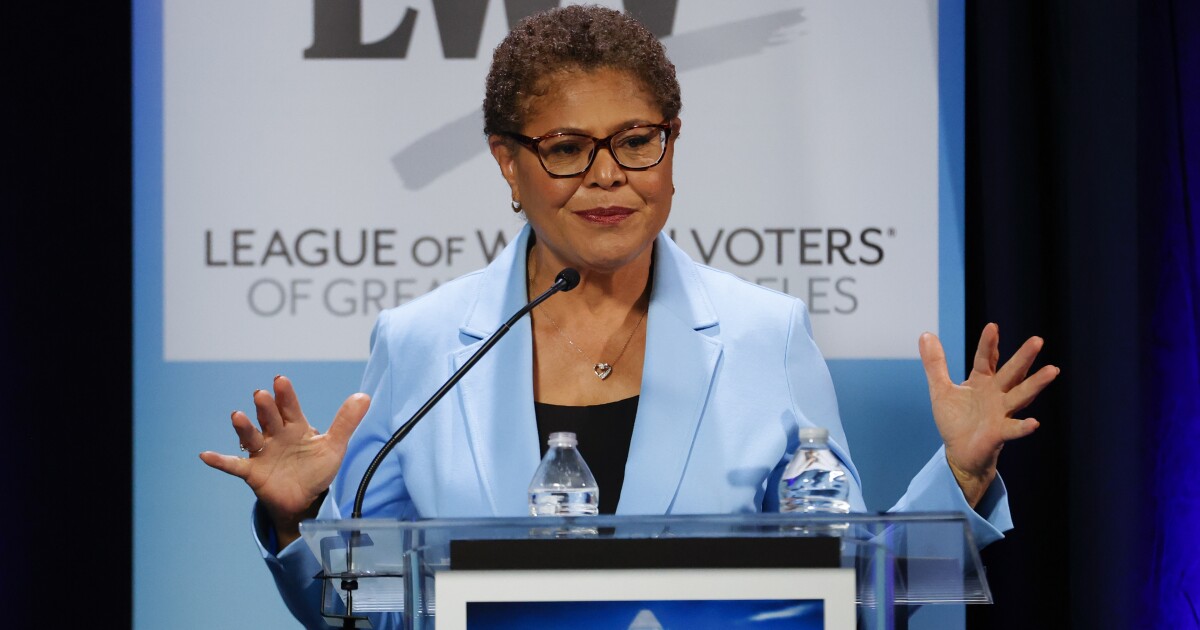 In 1990, an assistant physician who worked in the LA County-USC Medical Center emergency room saw poor and homeless patients every day, and she wanted to do something about the conditions in the neighborhoods they came from.

So she and other activists founded the Community Coalition, a nonprofit service provider whose goal was “to organize the community to turn despair and homelessness into action.”

US Representative Karen Bass, who is now running for mayor, will have to do a lot if she is elected.

If you believe the polls, Bass and billionaire businessman Rick Caruso are currently leading the pack. By the way, when I interviewed Caruso recently, his staff arranged for me to meet him at the Grove, his signature shopping center. Bass asked me to meet her at 81st Street and Vermont Avenue, home of the Community Coalition.

Years away from her medical career, the candidate wanted to talk about how she plans to heal the city and take it beyond years of escalating homelessness, impacted by poverty, addiction, mental illness and housing shortages.

“This is the whole foster care campaign we’ve been doing,” Bass said, pointing to black-and-white photos from the early days of the Community Coalition’s demonstrations around liquor store glut, the crack epidemic, and other causes. She pointed to a man who was attending a coalition meeting and said, “Now he was homeless.”

Bass’s work at the time convinced her of the need to serve in the state legislature, where she spoke for two of her six years. She has served in Congress since 2011 and chaired the Congressional Black Caucus for two years.

On the one hand, she has experience and connections that would come in handy if she becomes mayor. On the other hand, much of the homelessness epidemic is the result of failures not only at the city level, but also at the state and federal levels. So I asked Bass if she thinks she deserved any blame for the disaster in the city she wants to run.

“I have no problem being held accountable,” Bass said. But she ticked off some of the many legislative initiatives she’s focused on to tackle inequality, including school funding equality, criminal justice reform and the Family First Services Prevention Act — a groundbreaking child welfare reform package drafted with bipartisan support.

As for homelessness, when Bass rolled out her plan in January, I wrote that it was more than a little disappointing.

Not that I disagreed with her call to treat homelessness as a five-alarm emergency, to build more temporary and permanent housing (she said she would house 15,000 people in her first year), better mental health systems, and addiction treatment, do more homelessness prevention, pry more state and federal money, and work more closely with the province.

But we’ve been hearing the same promises for years and the problem has only gotten worse.

“I don’t think I have big ideas per se,” Bass told me, but she had no qualms explaining in depth how she intends to put her compassion, outrage, legislative know-how and connections to work, not just to reduce homelessness. , but to put an end to it.

I always get suspicious when a politician talks about ending homelessness with a series of promises that sound more like a wish list than an action plan. Is that even possible in a state with multimillion-dollar shacks, widespread poverty, and underperforming schools? Is it possible if much of what we see on the streets is the result of forces beyond local control, with an economy that crushes far more people than uplifts?

And yet, if the idea of ​​ending homelessness is naive, Bass doesn’t sound at all oblivious to the complexity she’d be taking on.

“Homeless people are not monolithic,” she said, so no one solution works for two people. We would need a much larger army than is currently deployed to do the outreach on the street, she said. And she seems to understand – not all candidates do – that we need another army on the other side, because without long-term case management, many people will not be housed.

She remembered the story of my friend Nathaniel, a classically trained musician, and how long it took mental health professionals and I to gain his trust and help him get in. It took a year and 17 years later he still needs that support. Not every homeless person needs it, but many do – especially those with severe mental illness.

Bass said she would work with the county to create the clinics that never came after mental hospitals closed. “There’s a lot of land in Palmdale and maybe we could start a village there,” she said, and in her perfect world that wouldn’t be all that.

Bass said that not only does she have working relationships with the five provincial regulators, but she considers them friends, and she has a direct line with state and federal department heads and politicians, all the way to the Oval Office.

“I can pick up the phone and call Xavier Becerra,” she said of the US Secretary of Health and Human Services.

As someone who was in medicine during the crack epidemic, Bass said, she understands the science of addiction. The meth that has become such a scourge is so potent, Bass said, that she would start working with federal colleagues to extend rehab beyond 30 days, because that isn’t enough time for recovery to stand a chance.

When she led the Community Coalition, Bass said, many of the service providers the agency hired had previously been homeless and/or incarcerated. She said she sees no reason why many of the tens of thousands of homeless people cannot be rehabilitated, housed and signed up for outreach, cleanups and graffiti details. There is an untapped workforce there.

Given the resistance of many homeless people to group shelters, where there is often little or no privacy, Bass said she wants to challenge architects to come up with better design concepts.

She wants to recruit interfaith ministers and philanthropists in a “moral crusade” to help address a humanitarian crisis and sad commentary on a country of such unprecedented wealth, and she wants to “make a clarion call,” perhaps through a local version. of the Peace Corps.

These would all be huge, difficult and expensive undertakings, and the twin forces of bureaucracy and petty politics have destroyed smaller ambitions.

Bass, who remembers watching the news about civil rights and anti-war movements with her father as a young girl, said she still sees people of color and others struggle, just as she did when she was a young doctor and activist.

“I know how hard this will be,” she told me, adding that she’s always been motivated by the tragedy of people on the streets, and there are far too many now. “I have nothing to lose, and I have nothing to hold me back.”