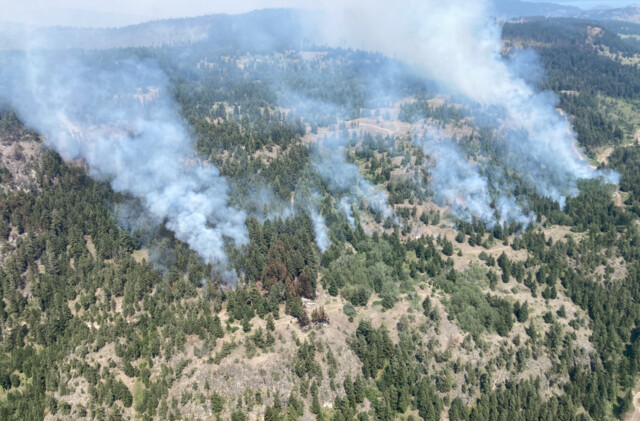 New maps by the BC Wildfire Service now pin the Keremeos Creek wildfire on over 6,800 acres.

Fire information officer Marg Drysdale, assigned to the fire, says an updated map of the fire, including planned ignitions in recent days, puts the blaze at 6,832 acres.

“The fire is still considered uncontrollable but we are making very good progress, very good guards have been put in place and the crews have done a phenomenal job,” Drysdale told Castanet News on Monday evening.

All evacuation orders and warnings remain in effect, but Drysdale says crews are working very hard and diligently to get people back to their homes as quickly as possible.

“But it’s clear they won’t change those (orders and warnings) until it’s safe to do so.”

There are still 547 properties under evacuation order, including the communities of Apex and Olalla.

As crews continue to fight the escalating Keremeos Creek wildfire and work around the clock to protect homes in evacuated communities, the BC Wildfire Service is calling on everyone to respect evacuation orders and road closures and to stop “belligerent” activity at checkpoints.

The nearly 6,000-acre fire has 547 properties on evacuation orders, including the communities of Apex and Olalla, although not all residents have complied.

BCWS spokesman Brian Zandberg said containment work is going well, helped by a lack of wind in recent days, and now it’s a matter of “connecting the dots” of containment lines. But with a fire of this magnitude in such a varied terrain, there is no quick fix.

Residents are understandably eager to return to their homes, and travelers hope Highway 3A will reopen soon. Zandberg says it is working on it, but safety has the highest priority.

In the Olalla area in particular, weather conditions have allowed the fire to spread to the community and the highway.

“We’re not 100 percent under control yet. We’ll get there. But it’s just too early to control that part of the fire,” Zandberg explained.

“We hear that in some cases people are verbally combative with security at some checkpoints, and that’s really not helpful,” added EOC spokesman Erick Thompson.

“We really appreciate people’s patience and understand that this is a difficult time … every effort is being made to get the people back home as soon as possible … showing some patience and kindness to those people who is just their jobs really important, understanding this process can be potentially dangerous if not done properly.”

Anyone who can leave must do so, and round-trip access is only available at specific approved emergency bases.

Helicopters may not be able to fire properly if people stay in evacuated areas, those individuals could be vulnerable to rolling debris, a phenomenon this particular fire has demonstrated in recent days, and having to rescue people in evacuation zones puts more lives at risk. the form of the RCMP and BCWS personnel that will get them.

“Please, obediently, trust that we are aware and empathetic with the hardships people are going through and are doing everything in our power to get people back into their homes,” Zandberg said.

He said he is not aware that anyone who has stayed in their homes is currently a problem for the crews, but that some who tried to leave and return were “belligerent” and caused a drain on their resources.

While there have been such cases of bad apples, many local residents have shown extreme patience, for which Tim Roberts, Director of Rural Keremeos of Area C, thanked them.

“People are frustrated and concerned, but also really understand the hard work that goes into protecting their homes,” Roberts said, adding that he and the EOC have been working on approved exemptions for access to certain properties.

“Just last night we have an orchard that is pushing hard to get all the fruit off the trees and it’s right on the edge of this evacuation order. So we were able to come to an agreement and process how they would make evacuations, come up with a reasonable timeline and permit process for them to get their crop done quickly. [we ask people to] stay patient and let us help them through the process.”

Activity has been quiet on the Apex Mountain flank of the fire, but the village is still under evacuation orders. Zandberg said that’s because a shift in the wind could change everything “in the blink of an eye.”

That said, firefighters at Apex have used the relative downtime to create groundbreaking plans for new structure protection and are ready when the fire starts to grow their way.

“As for our operations in the wild, we’re building guards as close as possible to the fire and emergency second and tertiary lines behind it to prevent the fire from ever hitting Apex Mountain,” Zandberg said.

It’s a hard-to-reach area, so the crews had to get creative.

“I understand it’s new, in terms of how much equipment is up there and the water relay systems put together there in collaboration. The Structural Protection Branch [of BCWS] asks us to go there and document what they have done because it is new. This has never been done before and they are quite proud of what they have achieved there.”

As of Monday, a total of 405 BCWS firefighters and crews from across the province are working on the fire, along with a wide arsenal of heavy equipment and air support.

Zandberg closed Monday’s press conference by asking the public to be safe on Highway 3A when it reopens.

“A few days ago we heard from our structural protection department, before the road closure was put in place. They had some real near misses with people watching the fire and almost hitting their fire trucks going out onto the road,” Zandberg said.

“We will definitely need people to [have their] eyes on the road. And drive well and slowly through that area.”

Evacuees in need of support and residents looking for the latest information on orders and alerts can click here for helpful links and phone numbers. Reception centers have been set up in Penticton at Princess Margaret Secondary and in Keremeos at Victory Hall.

Check out the full Emergency Operations Center/BCWS update for Monday, August 8 below:

The latest BC Wildfire Service update indicates that crews will continue to use scheduled detonators to bolster Sunday-built handguards.

“Two unit crews will use hand detonators on approximately 30 acres to secure a large plot of land north of the town of Olalla. Helicopters and an ignition specialist will also be on site,” the update reads Monday morning.

“These manual ignitions move the fire to safe, workable ground for crews and are critical to creating reliable containment. During operations, increased fire activity and smoke may be visible from Olalla and Keremeos.”

Today’s weather reaches a maximum expected temperature of 29 C and a minimum relative humidity of 15 percent, with winds up to 10 kilometers per hour from the east and southeast.

“This means some containment lines could be challenged, potentially bringing the fire closer to Apex Mountain Resort and into the Olalla Creek drainage. Given the predicted crossover conditions, crews will be monitoring the weather for all job sites.”

A new perimeter will be flown later in the day, but the current size estimate stands at 5,903 acres.

245 forest firefighters are assigned to this fire and are working with 160 additional personnel for structural protection of fire departments throughout BC, for a total of 405 firefighters.

The Keremeos Creek bushfires have been burning since July 29. Apex Mountain Village and Olalla are still under evacuation orders, as are many adjacent rural properties, and more than 1,000 properties are on alert.

“The size of the fire will increase as we target our control lines,” fire chief Mikhail Elsay said.

Hand igniters on about 30 acres were used to secure a large tract of land north of Olalla and move the fire to safe, workable ground for crews.

Hand ignitions were also planned on the northeast corner of the fire, from the end of Sheep Creek Road.

Crews are assigned to extinguish the fire north of the Highway 3A corridor.

On the western flank, the crews continued a direct attack from Green Mountain Road to Keremeos Creek Forest Service Road. Heavy equipment is still used to establish emergency lines from Apex Mountain over Dividend Mountain to the south of Keremeos Creek.

On the eastern flank, containment lines are still being constructed in the northeast quadrant. Crews continue to line up around Hedges Butte toward McKay Creek, building fuel-free and hand protection from McKay Creek to Green Mountain Road.

Nighttime operations continue with both wildland and structural crews patrolling and mopping as and when needed.

Hot, dry weather will continue to increase fire activity, the BC Wildfire Service says, but calmer wind conditions should aid firefighters in their efforts.

“The evenings have been much more stable in recent days,” Elsay said on Sunday.

– with files from The Canadian Press