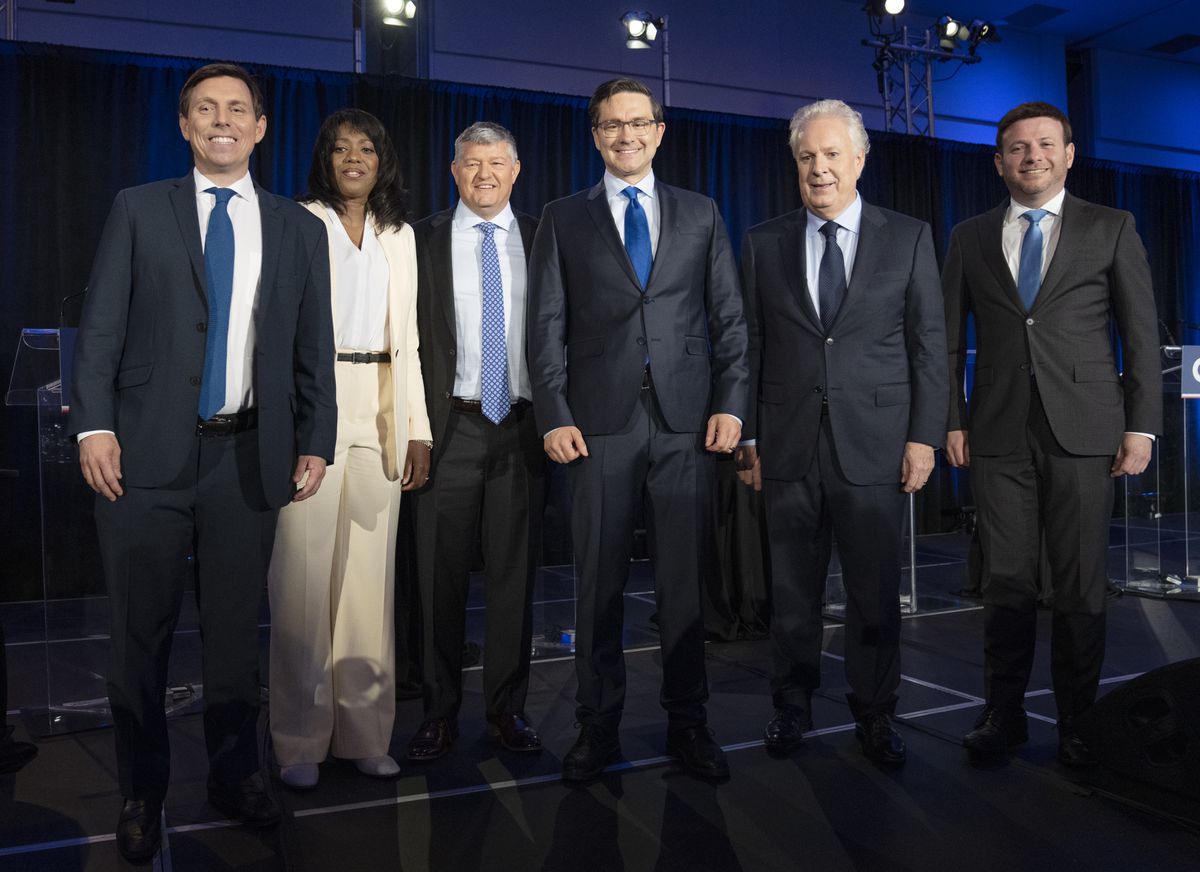 Conservative leadership candidates attacked the ethics of their opponents during the only official francophone debate, with Jean Charest, Pierre Poilievre and Patrick Brown highlighting past controversies while also sparring on how to tackle the cost of living and protect the French language. .

In the last scheduled debate of the campaign on Wednesday night, the alleged frontrunners stood out from the other candidates with their bilingual skills. Being able to communicate in both official languages ​​is widely accepted as a basic requirement for any leader of a national party.

The three remaining candidates — Scott Aitchison, Leslyn Lewis and Roman Baber — often struggled to break through in their second language and often read from their pre-written speaking notes, even during parts of the debate intended to be exchanged freely.

The French debate was moderated by Marc-Olivier Fortin, a former director of the Conservative Party. It was held in Laval, a suburb north of Montreal, in front of a rowdy crowd of about 700 people, who largely supported Mr Charest or Mr Poilievre and often cheered and jeered the candidates’ reactions during the two-hour debate.

“You are not credible on public policy matters if you are found guilty of violating ethical laws,” said Mr. Poilievre, citing a 2018 ruling by the Ontario Commissioner for Integrity regarding Mr. Brown as provincial leader of the progressive conservatives. According to the ruling, Mr. Brown had failed to report rental income and failed to disclose a $375,000 loan.

“The only one here who has broken the laws of Canada’s election is Mr. Poilievre,” replied Mr. Brown, referring to a 2017 compliance agreement in which Mr. Poilievre was found to be violating electoral laws for wearing a partisan logo when he made a government announcement in 2015.

Mr Brown sometimes struggled with his French grammar and searched for words, but was able to get his message across and engage in free debate.

After mr. Charest had taken a shot at Mr. Poilievre for his support of the truck convoy and vowed to enact a law against blockades, Mr. Poilievre intervened, summoning Quebec’s Charbonneau Commission, which investigated corruption in public sector construction contracts.

“Mr. Charest, I remember the Charbonneau Commission. … Truckers have nothing to learn from you when it comes to law and order,” he said.

In response, Mr Charest said the investigation found no association between political donations and contracts awarded. “I can lend you my notes because it seems your briefings were not well prepared,” said Mr. Charest.

The only official French debate took place at a politically sensitive time for Quebec. Two controversial laws passed by Quebec’s National Assembly were catapulted into the national spotlight this week: On Wednesday, the federal government said it would participate in a legal challenge against Bill 21, which bans religious symbols in some public sector jobs. , if the challenge reaches the Supreme Court. And Tuesday, the province passed Bill 96, which expands Quebec’s language laws.

Bill 96 has been fiercely criticized by Quebec’s English-speaking minority. The law will expand the requirement for French to be “generalized” in the workplace by applying it to companies with 25 or more employees. It also states that after the first six months, immigrants will receive services in French only, with some exceptions.

Mr Brown and Mr Aitchison, an Ontario MP, both said they were against Bill 96, while Mr Brown said the language law violates the Charter of Rights and Freedoms. Mr Charest, who will need a strong showing in Quebec for his road to victory, underlined the importance of provincial jurisdiction and said protecting French is a “sacred duty” of elected officials. His campaign said he would not remain neutral if an objection to Bill 96 reached the Supreme Court.

On economic policy, Mr. Charest attacked Mr. Poilievre for his recent pledge to fire the governor of the Bank of Canada if he formed a government. Mr Charest said his stance betrayed a lack of understanding of economic policies and suggested that concerns about the cost of living could be better addressed through measures such as supporting affordable childcare.

Mr Poilievre said he would tackle inflation by cutting taxes on gas and reducing the deficit. He was roundly criticized by other candidates for championing cryptocurrencies, such as bitcoin, as an opportunity to opt out of inflation. Cryptocurrencies are largely unregulated and their value has fallen sharply in recent months.

Opposition to, or lack of clarity about, abortion rights has hurt conservative fortunes in Quebec in the past general election, and Charest sought to force Mr Poilievre to speak out clearly. The Ontario MP said he is “pro-choice”.

Mr Charest, Mr Brown and Mr Aitchison have previously said they are pro-choice. Ms Lewis is against abortion and Mr Baber has said he does not think governments should have a say in how people raise a family.

Expectations were high for Mr Charest, who debated in his own field. He put in a strong performance on Wednesday and did what he had to do, said Yan Plante, a former senior staffer in Stephen Harper’s administration who remains neutral in this race. Whether that will be enough, however, is unclear, as Mr. Poilievre performed strongly, said Mr. plant.

While Mr Plante said the Ontario MP sometimes sounds more like an opposition leader than a prime minister, he added that Mr Polievre is the frontrunner and the message he delivered was simple and popular among party members.

Rudy Husny, also a former adviser in Mr Harper’s government, said there should be a language requirement for leadership candidates because the party risks its reputation in Quebec when it puts monolingual speakers on the ballot.

“Their level of French was inadequate and they didn’t belong on that stage,” Mr Husny said of Ms Lewis, Mr Aitchison and Mr Baber.

The party reserves the right to hold a final debate in August. The winner will be announced by the party on September 10 at an event in Ottawa.