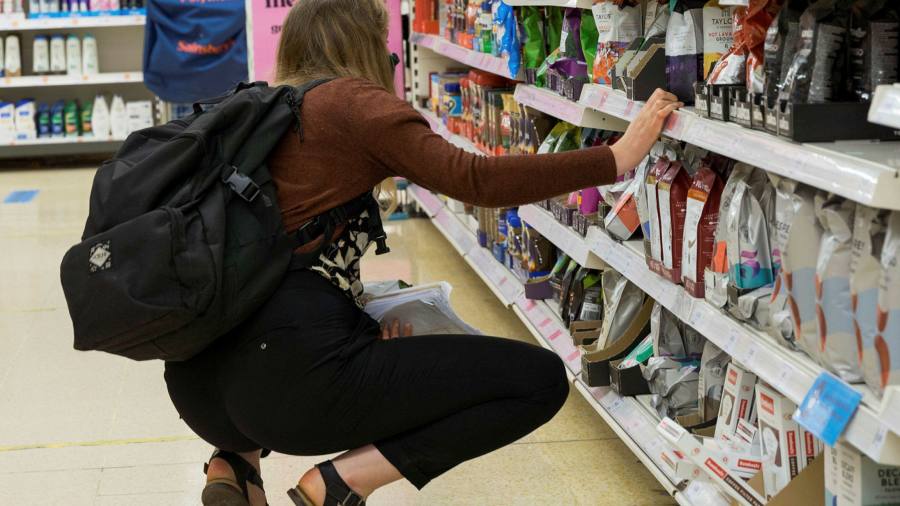 Some of the world’s largest consumer goods manufacturers will experience a decline in sales in the coming months as customers switch to cheaper supermarket own brands in an effort to ease the pressure on the cost of living from rising inflation.

Multinational food and home products makers, including Unilever and Danone, are preparing to publish their first half results in the coming days. Analysts predict declining sales volumes in the coming months as sales of so-called private label goods begin to grow.

Private label labels have gained market share across Europe in the past four weeks, as opposed to “consistent modest market share declines” before this year, Jefferies analysts said.

Households are abandoning branded yogurt, coffee, ice cream and paper products in favor of the stores’ own versions, while also trading in cheaper versions of salty snacks and frozen meats and vegetables, Jefferies said. Private labels have gained 1.1 percentage points of market share in Europe in the past four weeks, according to the group, compared to 0.38 percentage points in the past year.

In the US, private label products gained market share for the four consecutive months through mid-June, according to Stifel analysts. They said the increase followed two years of “ongoing market share losses” for supermarket’s own brands.

“Private brand growth is an ongoing threat to major food companies and is likely to be a secular theme over the next five to 10 years,” said Christopher Growe, an analyst at Stifel.

Berenberg said sales volumes at major consumer goods companies were resilient in the first quarter of the year, forecasting comparable relatively positive numbers for the second quarter, but warned of sales declines in the second half.

Unilever “has been exposed to many of the categories most at risk from private labeling and/or down-trading, including skin cleansers, household cleaners, cooking ingredients, deodorants, laundry detergents and ice cream,” said Berenberg analyst James Targett.

Jefferies analysts noted that Danone is vulnerable to down-trading in its yogurt portfolio. A Berenberg survey of UK consumers found that half of respondents expected to switch from their usual brand, while 58 percent were considering switching to private label.

Global brand owners have raised their prices in the face of sharp increases in raw material, labor and transportation costs. In the first quarter, consumer multinationals said they had increased prices by an average of 5 percent year-on-year.

The upcoming results – which include Unilever and Mondelez on July 26, Danone and Reckitt Benckiser on July 27, Nestlé on July 28 and Procter & Gamble on July 29 – will show whether they were able to pass on further cost increases to households without a decrease in sales.

While commodity prices have fallen somewhat from this year’s highs, consumer goods groups still have significant additional costs to pass on to customers also facing the possibility of a recession.

“Europe has the highest private label penetration, so it will clearly be the most vulnerable market to private label down-trading,” Targett said, adding that US consumers had more options for cheaper branded products, along with supermarket own brands.

Private label is gaining popularity in the US in categories such as bleach, vitamins and bottled water, Jefferies said.

In emerging markets, consumers who struggled tended to switch from packaged foods to home cooking, Targett said, or to regional players less plagued by exchange rate fluctuations and supply chain problems, such as Indonesian group Wings, a Unilever rival. in the country.