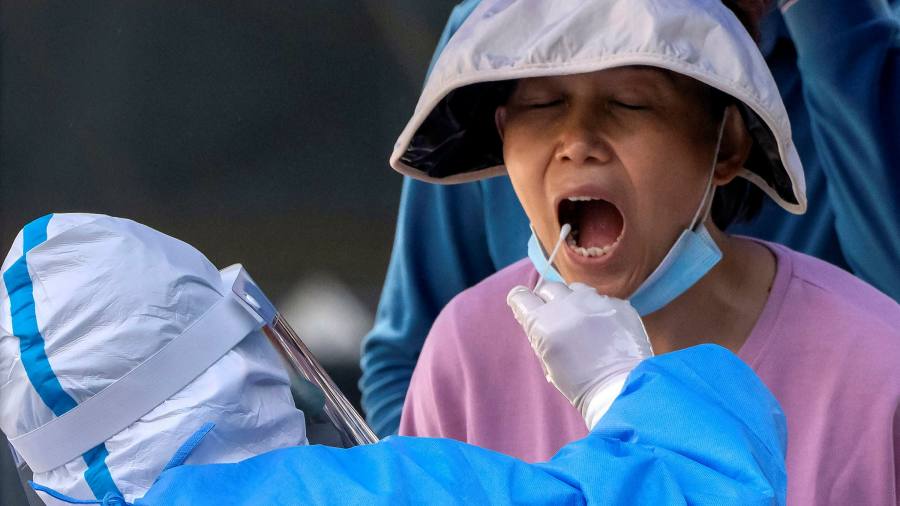 Caixin China’s purchasing managers’ index for services, which asks companies whether they have experienced an increase or decrease in business activity compared to the previous month, fell from 42 in April to 36.2 in March, the second-strongest drop since the launch of the study in 2005 .

“The new round of Covid-19 outbreaks has hit the services sector hard,” said Wang Zhe, senior economist at the Caixin Insight Group, explaining that supply and demand had “shrunk severely.”

The survey results were the most recent indicator of the economic pain inflicted by President Xi Jinping’s zero-covid policy, which has kept hundreds of millions of people homebound for weeks and restricted travel within the country.

Several multinational corporations, including Starbucks, Estée Lauder, Apple and Coca-Cola, have raised the alarm about the effect of China’s lockdowns, saying it would hurt revenues in the world’s largest consumer market.

The results of the Caixin survey revealed the harsh impact of the lockdowns on Chinese businesses. The 400 companies surveyed reported having to lower their prices due to sluggish consumer demand, while transportation and raw material costs had risen due to intercity travel restrictions.

Some companies surveyed said they had laid off workers because of the collapse in consumer demand and rising costs.

Economists have warned that the impact of the measures could be even more severe than the contraction during the first Wuhan outbreak two years ago, as restrictions are concentrated in and around Shanghai, which is home to many high-tech and automakers.

Cases have been reported in Shanghai for the past two weeks and several manufacturers in the city, including Tesla, have resumed operations.

But even as conditions ease somewhat in China’s financial center, companies across the country have had to adapt to an ever-changing array of public health measures.

Several cities, including Hangzhou and Wuhan, have introduced a requirement for residents to undergo a PCR test every 48 hours to travel on public transportation, eat at restaurants or visit public places. Experts said the measures risked plunging cities into de facto incarceration and increasing the economic barrier to the service sector.

Beijing officials on Wednesday called the coronavirus situation in the capital “extremely challenging” after recording 51 cases. Authorities have closed several subway stations and bus routes and ordered office workers in Chaoyang, the city’s largest district, to work from home from Thursday.

The daily number of coronavirus cases in the capital has remained at around 50 for the past week. Beijing has stopped ordering a citywide lockdown, but many residents have been ordered to stay in their apartments.

An analysis of traffic data from the Financial Times showed that roads in central Beijing, which are normally packed with traffic, were shut down during this week’s three-day public holiday, during a period that is normally a busy period for shops. and restaurants, had a little bit of vehicle activity.