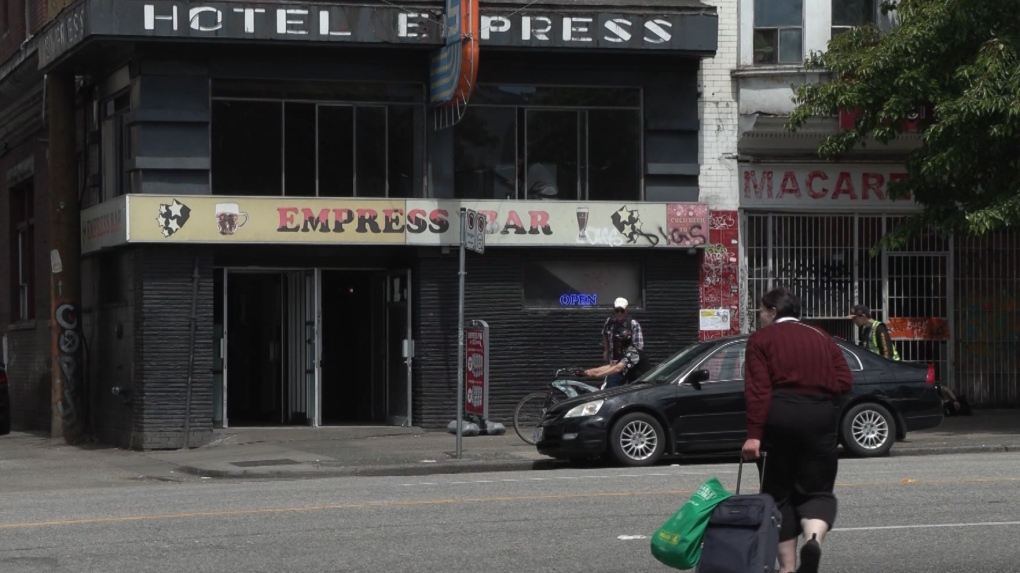 Warning: This story contains details that may be disturbing to some readers

A woman who was attacked by a complete stranger armed with a machete on the streets of Vancouver shares her story.

Around 7 p.m. Sunday, Casey Janulis and a friend loaded their luggage into the back of a taxi outside the Empress Hotel on the Downtown Eastside. Janulis said a man walked past her with an umbrella in his hand.

“He almost looked at me as if I was insulting him or saying something, but no words were exchanged,” Janulis said. Moments later, she felt a twinge in her neck.

“I heard a woman’s voice screaming ‘that’s not an umbrella, that’s a machete’ and then all the blood was pouring everywhere, in my eyes, on the sidewalk,” she said.

Janulis had been cut across the base of her neck. Within minutes, ambulances arrived and she was loaded into an ambulance. The last thing she remembers is her clothes being cut with scissors and thinking, “I think I’m going to die.”

Janulis said the attacker also cut her boyfriend’s arm, but his injuries were less serious. Both have been taken to hospital.

On Monday, Sgt. Steve Addison of the Vancouver Police Department said a patrol officer was in the area when the attack happened and would be spotted soon. He also called on anyone with information to come forward.

“Someone who (Janulis and her friend) didn’t know, approached for no apparent reason and attacked them with what we believe to be a machete,” said Sgt. said Addison. “There was a suspect, we do have a description.”

The suspect is described as a ‘heavy’ man in his forties. He was wearing a gray T-shirt, a blue raincoat and an umbrella at the time, police said.

Addison also told CTV News that investigators want to speak to the taxi driver who was at the scene. The vehicle was flagged off, so there is no booking record.

Janulis is now dealing with the aftermath of her attack. She has “more than 30” stitches and staples holding her wound together, she has no sensation from her neck to the top of her head, and said she can’t feel her hands when she first wakes up in the morning. She’s scared too.

“Like I’m sitting here, if someone walks by I’m jumpy,” she said.

Janulis does not live in Vancouver. On the day of the attack, she was visiting a friend and was moving to the Sunshine Coast to work on her art. But since the attack, she’s been living in a hotel away from Downtown Eastside.

“I’m not from here, I’ve never been to Hastings, I didn’t get the memo,” she said. “It costs me a lot of money to stay there (the hotel), but I have to stay close to the hospital.”

Janulis said she has read articles about Vancouver’s recent history of attacks by strangers, which is one reason she decided to speak out and push for changes.

“I just feel like there shouldn’t be people walking among us with that kind of mental illness,” she said. ‘I just want that man off the street, in front of everyone. Because that could have been anyone. It happened to be me, but… thank God I’m here.”