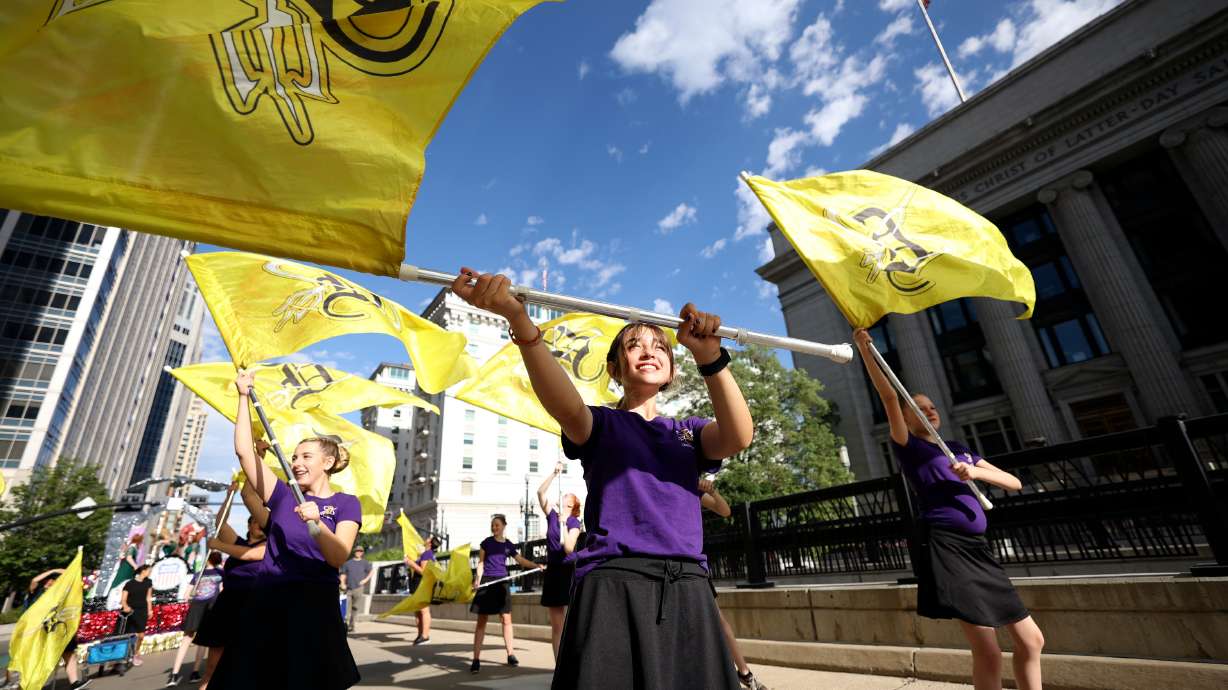 Emma Brando practices with the Davis High School color guard for the start of the Days of ’47 Parade on Saturday in Salt Lake City. (Kristin Murphy, Deseret News)

SALT LAKE CITY — Hundreds of people lined the streets of downtown Salt Lake City on Saturday for the annual Days of ’47 Parade. Dozens more watched from balconies as announcers detailed all the proceedings.

The 80-year-old from Guatemala was jamming on the corner of State Street and South Temple when the Viewmont High School marching band came out to play Weezer’s “Buddy Holly.”

Binkhurst, who came to Bijenkorf State in 1964, said she has visited many places. “But Utah is the best for me,” she said. “The people are beautiful.”

She wasn’t the only one who thought so. The Days of ’47 Parade was a riot of color, sound, and celebration in honor of Utah’s pioneering heritage.

The parade featured 37 floats, many sponsored by The Church of Jesus Christ of Latter-day Saints, and others made by companies.

Jean Bingham, the Church’s Relief Society general president, served as the parade’s grand marshall—the first woman to receive the honor since the event began in 1849.

The parade started at 9:00 a.m. on State Street and South Temple, ran down 200 East, then turned off to 900 South, and ended at Liberty Park. The parade celebrates the Mormon pioneers, many of whom arrived in the Great Salt Lake Valley after trekking across the plains on July 24, 1847, in search of a new life without religious persecution.

“We believe the example of the courage of past and present pioneers creates a vision for our combined future that all can follow as our new pioneering spirit,” says the Days of ’47 website.

This year’s theme was “Pioneer Courage – Live It!” A float displayed Brigham Young University’s Cosmo the Cougar mascot; another contained the Chick-Fil-A cows. Some floats showed traditional pioneers in clothing from the 1800s, while others emphasized that pioneers come from all over the world. And none looked the same.

A float decorated with characters from “The Wizard of Oz” won the People’s Choice Award, while another, featuring a lion and a bubble machine, received the Children’s Choice Award. Each float received the most votes in their respective categories from people attending the Parade Preview held July 18-19 at the Mountain America Expo Center in Sandy.

The parade also featured dozens of entries such as marching bands, horsemen, military groups, and more. Many families camped out on the street the night before to get the best vantage points.

gov. Spencer Cox and his wife, first lady Abby Cox, were among the first in the parade. Later, Utah’s Burgess Owens and John Curtis waved to the crowd from 1966 red Mustangs.

Representatives from the Mexican consulate dazzled the crowd with their bright, traditional clothing; and a girl in the Carbon High School marching band turned a stick with a Tyrannosaurus rex on it.

Jenson said she grew up in Utah and her family is descended from pioneer settlers.

Boise doesn’t have any parades at all, she said, so when her daughter asked what a Pioneer Day parade is, she decided a weekend trip to Salt Lake City was in order.

Jenson’s kids had only one disappointment: none of the parade floats threw candy.

During the parade, the Salt Lake Police Department stopped and called a man driving his car onto the closed parade route.

The 47-year-old man approached officers at 10:15 a.m. asking if he could bypass a road closure to get to his nearby home. Police said he was told he couldn’t, but the man later returned and tried to drive around a road closure, police said in a statement.

Shortly after being told for the second time that he had no access to the parade route, police said he passed through an opening where parade personnel and equipment were lined up and was spotted driving slowly along the parade route. When officers ran over and ordered him to stop the car, the man reportedly began to accelerate slowly at 150 E. 200 South.

“Due to the potential danger, officers opened the car’s door and successfully parked the car and pulled the driver out without further incident,” the police said in a statement.

The man was charged with disobeying a traffic controller and illegally driving to the left of the center.