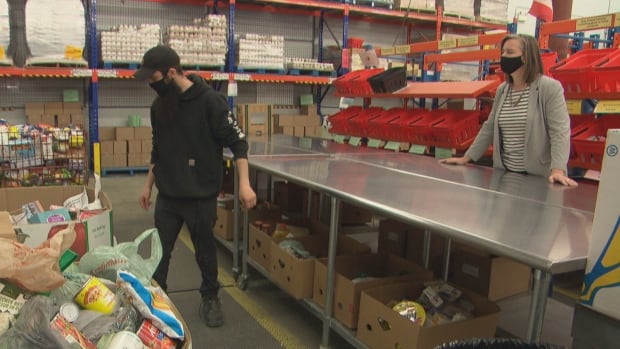 Food banks in Ottawa-Gatineau say they are facing unprecedented demand as prices continue to rise.

According to a press release, the Ottawa Food Bank serves more people than at any other time in its 38-year history.

Compared to March 2017, demand has increased by 39 percent and by 20 percent compared to last year.

That puts pressure on the 108 organizations it supports, as well as the people who use its services, said Rachael Wilson, the food bank’s CEO.

Social assistance rates have not kept pace with the cost of living in our city.— Rachael Wilson, Ottawa Food Bank

“It’s getting harder and harder for people to afford to put food on the table,” she says.

Brian Olsen, who works for the Ottawa Mission as a driver and cooks in one of the mobile kitchens, said he serves between 150 and 250 hot meals at each of his two stops per day.

Olsen has been working for about six weeks now and said he will see more clients as the weather gets nicer. And while many of those customers are familiar faces, he says a handful aren’t every day.

“There are new people every day that I work.”

At Moisson Outaouais, a food bank in Gatineau, Que., the feeling is about the same.

“All of this is a constant concern,” President Diane Dupont Cyr said. “The cost of living is soaring. Where does it end?”

Sylvain Charlebois, director of Dalhousie University’s agri-food analysis lab, said part of the problem is that as food prices rise, more and more people are looking for deals.

This affects food banks on two fronts, according to Charlebois.

Not only do they get less food for the money they spend, but apps like Flash Food and FoodHero are connecting more and more people with deals in supermarkets, Charlebois said — meaning the items normally donated to charities are being snatched instead. .

“So less food is being diverted to food banks these days,” he said. “That affects their ability to serve a greater number of people, and the number is growing.”

“People can’t afford to live in expensive cities like Ottawa and in cities across the country,” she said.

“Social assistance rates have not kept pace with the cost of living in our city. So we would like to see these increased so that people can afford food, rent and other necessities.”