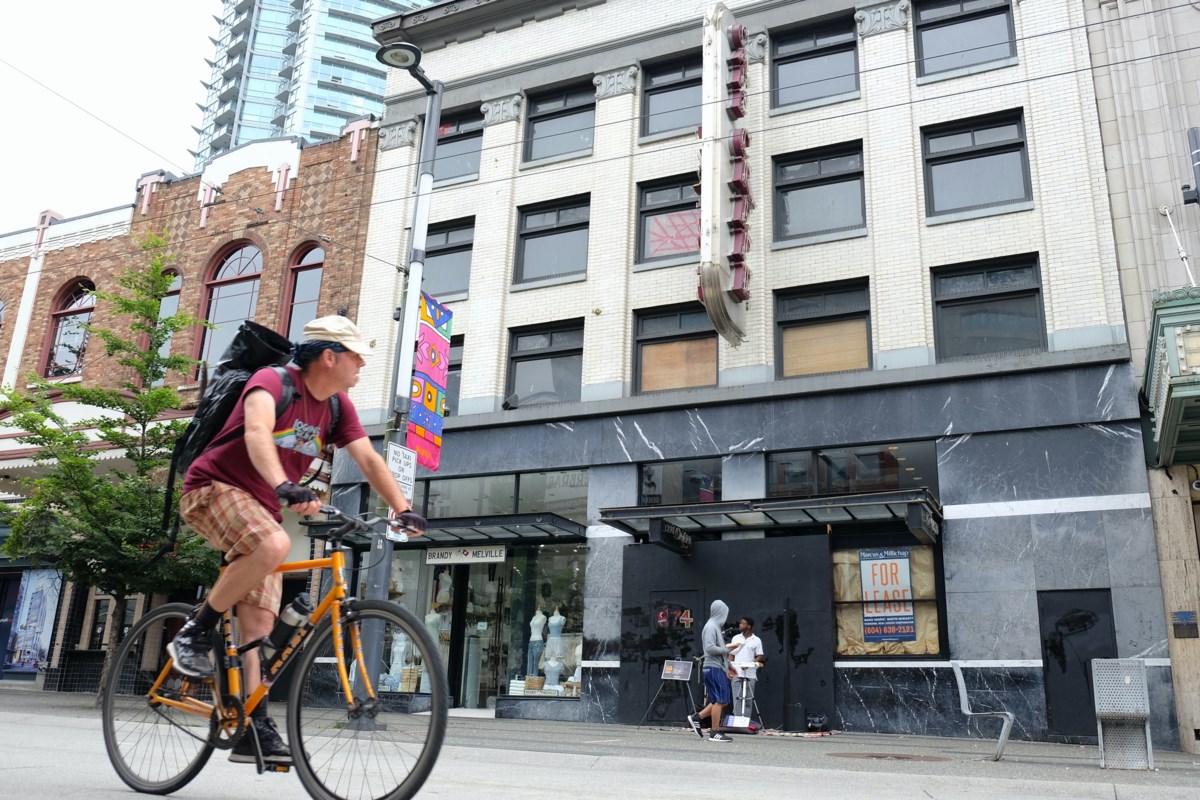 Bonnis Properties plans to redevelop nearly the entire block of Granville Street, including the State Hotel

You may have already read some of the coverage of the proposal to construct a massive 16-storey commercial building along the same block that includes the iconic Commodore Ballroom and four other historic buildings.

The views show a glass-heavy terraced design, which exudes a cruise ship-like atmosphere.

While the building itself gets all the attention, it’s the one-room State Hotel adjacent to the Commodore that several councilors were intrigued about and how it might or might not fit into the redevelopment.

I’ll elaborate further on the page.

First, some background on what the city’s planning director, Theresa O’Donnell, described Tuesday as a “complicated” proposal.

Yes, it’s complicated, but it’s also controversial for several reasons, not least the scale and mass of the building, which would reach a height of 260 feet and float above the swath of predominantly low and medium-rise buildings.

City officials are not crazy about the project and say so in a report to the municipality.

“If a development of this magnitude is allowed, the historic character of a dense urban streetscape and the pedestrian-friendly sense of place in Granville Street could be lost forever,” the report said.

Employees pointed out that the proposal “deviates significantly” from the city’s heritage policy, the unicameral ordinance and the height and shape provisions of the official downtown development plan.

Also, the 1910-built State Hotel and three other landmark buildings — the Service Building, Cameron Block, and Clancy Building — would be demolished, with the exception of their main facades, which the staff say is untenable conservation practice and inconsistent with the applicable heritage policy.

That said, an enthusiastic council decided on Tuesday that staff would like to show staff what they can do to resolve the issues with the proposal, then return a referral report. It is then up to the city council to decide whether the request for rezoning will go to a public hearing.

“Following the council’s decision, staff will now conduct a full redevelopment review,” the city’s communications department said in an email. “This will include consultations with both the public and the Planning Committee, as well as reviewing the aspects of development that the council has included in an amendment to the report’s staffing advice.”

Now to the State Hotel…

It’s a 73-room SRO and has been vacant for at least 50 years, according to Kerry Bonnis, who operates Properties with his brother Dino Bonnis, and spoke to the council on Tuesday.

Bonnis said the hotel was damaged by fire in the 1970s, and when the brothers took it over about 22 years ago, it was in bad shape and unlivable.

“There were over a thousand carcasses of pigeons, it was infested with rats and basically we had to do hazmat work to remove everything,” he said. “There were no kitchens, no toilets, nothing.”

Shortly after the purchase, the brothers approached the city to renovate the hotel for affordable housing. But Bonnis said “our request was flatly rejected,” while the planner at the time said no new homes could be built in the entertainment district.

Now Bonnis wants to keep the facade, but tear down the rest of the building to help expand the Commodore, which the brothers own. The idea is to add normal sized freight and elevators and a loading area on the hotel grounds and connect them to the Commodore.

The same would be done with the building on the north side of the Commodore, but with space large enough to park music equipment trucks. Parking for the public and bicycles would also be added.

The development may allow the Commodore’s lobby to grow in size.

“This would keep the infrastructure working for the Commodore for years to come, as well as provide better wheelchair access to the Commodore bowling alley,” he said. “There are a lot of seniors out there bowling and we need those lifts.”

Bonnis said in an interview on Friday that adding such infrastructure would reduce build-up and break-down time for bands and attract more musical acts, noting that the Commodore only has a small elevator and equipment has to go up the stairs as well.

But when Bonnis wants to demolish the hotel, the city ordinance for single rooms comes into play. Whether it should apply is an open question as the rooms have been vacant for 50 years and, as said a few sentences ago, the city would not allow renovations for affordable housing.

Regardless, Bonnis said he would pay at least $230,000 for every lost room, as per the statutes. However, Bonnis said that promise will only be fulfilled if there is no change in the density requested to build the new development, which includes 400,000 square feet of office space.

The quick calculation of that is about $16.5 million for the city treasury, which is Coun. Jean Swanson said it could be used to support the city’s SRO acquisition and renovation strategy.

Bonnis also told Coun. Sarah Kirby-Yung said he was open to considering adding a new music space to the development – again, he emphasized, as long as there is no change in the density of the project, that restaurants, shops and an outdoor promenade overlooking Granville Street.

‘That would be tragic’

Live Nation currently operates the Commodore, and Bonnis said the company told him the ballroom is expensive to run and “labor-intensive”, requiring equipment up the stairs.

“They’ve been approaching us for the past 20 years and asking, ‘Hey, can we do something on the sides of the building to make it economical,'” he said.

“They have always told me that there are risks and it may no longer be viable to operate. We are not the operators. I can’t speak specifically, but I’m just relaying what our tenant told us. And, I mean, that would just be tragic.”

The design of the new building requires what architect Ryan Bragg described as a bridge to be built over the Commodore to protect it. Preserving and protecting the Commodore was the reason for the redevelopment proposal.

“We recognize that the Commodore has a greater value than anything else on the block, and there are many reasons for that – it has architectural value, but it also has a huge cultural legacy,” Bragg said.

“That cultural legacy is within the entertainment community as well as within the LGBTQ community, and it’s part of what we are as Vancouverites.”

‘Tips the street in a different direction’

Bonnis also spoke to the deteriorating Granville strip, saying it “desperately needs an injection of energy”; The City Council heard from Nolan Marshall of the Downtown Vancouver Business Improvement Association that vacancy on Granville Street is double that of the rest of downtown, with one in four storefronts currently inactive.

“Unfortunately, a shrinking downtown theater and entertainment district is not unique, but what is unique and rare is private developers eager to initiate the revitalization process without any government subsidy,” Marshall said.

“Leaders in other boroughs would raid for a project like this. Believe me, it will be harder, not easier, if we don’t act now to turn the street in a different direction.”

Will the development ever get the green light?

“Unfortunately, it’s not in our hands,” Bonnis said Friday. “It is in the hands of the city council, the spatial planning department and the municipality. Hopefully those three groups can see how important this is to really drive the momentum for change and transformation and revitalization of Granville.”