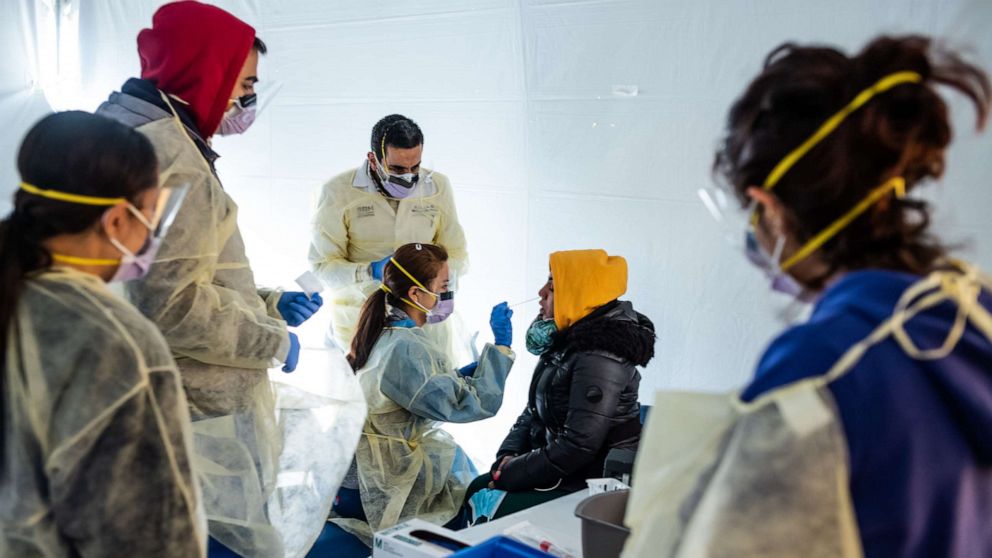 The sound of construction around Cedars-Sinai Marina del Rey Hospital is hard to miss. Crews are essentially building a new hospital because the old one, just south of Los Angeles, isn’t big enough. For the staff it is a sign of rebirth after two tiring years. The long-delayed construction has finally started, after being postponed due to COVID-19, and it is a sign that the fight against the virus is better.

Just a few months ago, the parking lot outside Cedars-Sinai Marina del Rey was essentially a battlefield hospital. There was a giant tent used for patient triage. Today the big tent is gone and cars are again filling parking spaces.

The doctors and nurses in Cedars-Sinai, like their colleagues across the country, have been through the worst of the pandemic. They have witnessed countless patients unable to breathe and the heartbreaking farewell to relatives of their loved ones who died of the coronavirus.

With 1 million dead in the United States, Cedars-Sinai staff remembers the battle they endured.

“There were certainly a lot of patients waiting to be seen,” said Dr. Oren Friedman, a pulmonologist and medical director of the Cedars-Sinai ICU. “Exactly the number of patients we had who needed hospital support and ICU support. There has never been anything like this. It was just such a large number. We have never felt like this before.”

The staff remembers the early months when there was no testing for the virus and treatments were extremely limited. Their colleagues became seriously ill. Patients poured in, unable to catch their breath.

“It was overwhelming, I think, for everyone in healthcare. However, we were dependent on each other. We trusted as much as possible of the literature that came out,” Friedman explained during a recent hospital visit. “We formed groups and committees of people who constantly went through the literature and the latest news. I don’t think any of us have ever been in a situation where so many people we cared for had a disease that was so new and the information came out at lightning speed.”

Friedman, 44, has a unique perspective. Not only is he a pulmonologist who could see what happened to patients’ lungs while they were suffering from COVID-19, but he caught the virus early in the pandemic while on the job and struggled for weeks to recover. And once he felt better, he went to New York City to help as the region was swept by the virus.

“The past two years have been the most challenging time for anyone, especially in my generation, in pulmonary and critical care medicine,” he said. “When we all look back on it, in a way it’s like we’re in an alternate universe. I don’t think any of us have ever seen so many patients come in with that amount of a particular disease. And certainly none of us have ever seen the healthcare system so influenced and so overwhelmed.”

In the first months, so much was still unknown. The virus spread so quickly without a vaccine and without the American public taking many precautions. In mid-March 2020, President Trump declared a national emergency. The predictions by medical experts that 100,000 people could die were immediately rejected by skeptics. But the number of people who died continued to grow. Doctors and nurses on the front lines were at war, while politics played into the national spotlight.

“The past two years have been very overwhelming and frightening,” says ICU nurse Morgan Roverud. “At the beginning of the pandemic, everything was unknown. So we didn’t know how to deal with COVID.”

“It was absolutely scary,” Roverud recalled. “Often I had the feeling, ‘How can I do this?’ But I think with the teamwork aspect here [Cedars-Sinai] Marina del Rey and the friendships you form with the staff and other leadership just makes everything easier.”

It was that teamwork the hospital staff say they got through. The staff became one and worked around the clock. Doctors and nurses were constantly exhausted as they worked to save lives. Still, many patients would be overtaken by the virus.

“There was a connection, I think, because everyone was on the same mission together to take care of all these patients. But it was also sad and at times it felt hopeless,” Friedman said.

Friedman said he knew the wave of death he witnessed in New York was likely to travel to California and elsewhere. He was right. The halls of Cedars-Sinai Marina del Rey became full during several waves of the pandemic. The sound of ventilators pumping air into the patients’ lungs filled the corridors. COVID-19 killed Americans.

“We had never seen so many patients who were so severely ill on ventilators,” Friedman said. “It was exhausting. The days were long. Everyone worked extra shifts, extra hours. People doubled in shifts. People had to be creative and gather resources.”

As the pandemic claimed more victims, there were the doubters, including high-profile politicians and media figures, who argued that COVID-19 was not real or serious. For the care providers in the ICU in Cedars-Sinai, there was nothing worse than those who claimed the virus was not serious.

“There was a temptation from all of us to run out and yell and shake people and tell people, ‘Do you realize how bad this can be? Do you realize what it’s like inside the hospital? You should have masks? wear, you should get vaccinated.’ It was extremely frustrating,” said Friedman.

Friedman said after the first wave, medical staff could sense that the general population wanted to get rid of the virus, but the virus wasn’t done with Americans yet. “It made our job a lot more difficult. It felt like you were going to war, but when you came home from the battle, people just didn’t believe there was a war,’ he said.

Today, after so much heartbreak and after so many Americans have been lost to the virus, perhaps the worst of COVID-19 is over and now we have to learn to live with it.

“With the vaccines that still work well against variants and the proliferation of antiviral drugs that we have now,” Friedman said, “we should be able to control some of those numbers better than we have in the past.”

Now that the big tent is gone and there are fewer COVID-19 patients, it is quieter in the hospital. But the team has scars from the past two years and the 1 million lives lost in the US

“It’s a staggering number. It’s a number that most people have a hard time understanding,” Friedman said. “Even what a million would look like. It’s also very disappointing as a healthcare provider to realize that a lot of those things probably shouldn’t have happened.”