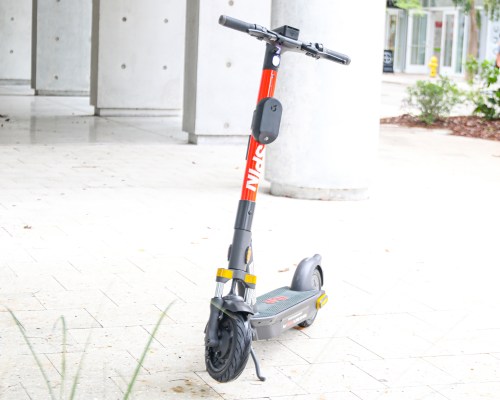 Shared micro-mobility companies have applied surprisingly advanced new technology to correct for what cities hate most: sidewalk driving. Some companies, such as Bird, Neuron and Superpedestrian, have relied on hyper-accurate GPS systems to determine if a rider is riding inappropriately. Others, like Lime, have begun integrating camera-based computer vision systems that rely on AI and machine learning to accurately detect where a rider is.

The latter camp relied largely on the innovations of Drover AI, a Los Angeles-based startup that has tested and sold its attachable IoT module to companies like Spin, Voi, Helbiz, Beam and Fenix ​​to help drivers improve scooter safety. and, most importantly, win city permits.

Founded in May 2020, Drover closed a $5.4 million Series A on Wednesday. The startup will use the money to build on the next-generation PathPilot, Drover’s IoT module that includes a camera and computer system that analyzes visual data and issues commands directly to the scooter. Depending on the needs of the city, the scooters will either make noises to warn a rider that they are riding on the sidewalk or slow them down. The new version, called PathPilot Lite, will do much of the same, except it will be more integrated, better and cheaper, said Alex Nesic, co-founder and chief business officer of Drover.

Getting those next-gen modules into production still needs to hire a few minds in engineering and project management, as well as government relations and communications in Europe to support Drover’s expansion across the pond.

“We have a beta dashboard that shows a color-coded version of what travel looks like broken down by infrastructure, how much time each vehicle spends on each section, and in total across an entire fleet,” Nesic told TechCrunch. “We have a parking validation dashboard where for each of your vehicles deployed in the city you can see where the ride ended, what our AI scored the parking assignment, along with a photo. So all of these tools that we offer to our operator customers can build them ourselves based on the data we already share with them, but they just don’t have the bandwidth, so these customer-centric tools are an added value.”

Drover also sells its data to cities, exploring the use of distributed cameras moving through cities to build out a suite of tools that could potentially provide a city-centric dashboard that displays information such as infrastructure condition or bike lane violations. , what a “pet project” from Nesic.

“For example, our system can tell you that the rider was on the bike path 20% of the time, on the sidewalk 30% of the time and the rest on the street,” said Nesic. “That can lead to a lot of policy decisions about where to build bike lanes or whether the bike lanes you’ve invested in are working.”

Drover has attracted interest from transport agencies such as Transport for London, as well as insurance companies that want this kind of granular data to understand how new mobility modes are being used in infrastructure.

There are some who say that the future of micromobility really lies in private vehicles, rather than shared ones. If that’s the case, it’s obvious that shared micro-mobility will set the trends that future private scooters will have to live by. Sophisticated driver assistance systems are becoming increasingly important for operators looking to win over cities, and Nesic thinks a private vehicle policy will soon follow – he even hopes it will.

“Some of the money we raised will go towards exploring other integrations further down the supply chain with vehicle manufacturers and IoT manufacturers,” said Nesic. “The real goal is to cut costs, and if we can, have our technology already have a next-generation IoT feature set that already has compute capabilities, and then we’ll just license Drover’s AI, which is equipped to power various infrastructure around the world. .”

But that’s way below the line. For the short term, Drover is still hyper-focused on expanding on the backs of shared scooter companies that are hearing more and more demand for this kind of technology from cities.

Drover’s Series A was led by Vektor Partners, a VC firm focused on the future of mobility. The company recently raised a €125 million fund for sustainable mobility, which is where Drover’s recent raise came from.