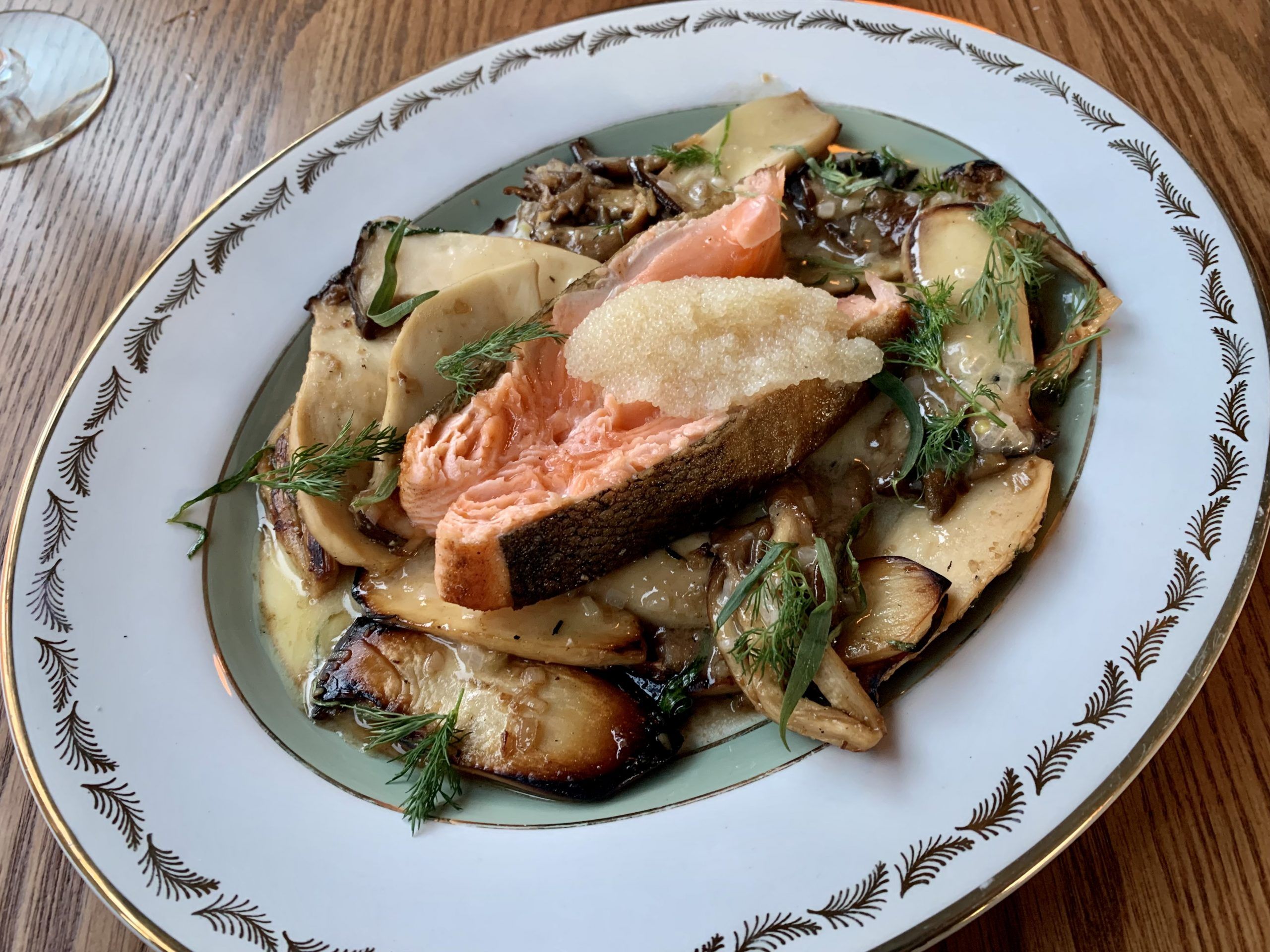 On one of the two visits I made to Le Poisson Bleu last weekend, we were hesitant about ordering the charcuterie board. That is, until our waiter was bubbling with excitement over the tuna bone marrow off the plate. After we twisted our rubber arms, we said yes to the $70 indulgence.

Well, shake your head. Opened in early February on an unassuming corner in Chinatown, Le Poisson Bleu advocates an emerging global culinary trend that focuses on preparing and serving seafood in innovative and even challenging ways.

Australian chef Josh Niland, author of 2017’s The Whole Fish Cookbook and 2021’s Take One Fish: The New School of Scale-to-Tail Cooking and Eating, is the pioneer of this trend and his high profile supporters include the British cooking queen Nigella Lawson, who calls him ‘a genius’.

It’s a credit to Ottawa’s advancing restaurant scene that the three owners of Le Poisson Bleu – chef Alex Bimm, who has cooked at Les Fougères in Chelsea, Que., and The Whalesbone on Bank, his brother Eric Bimm, and their cousin and bartender Sophie Velor – chose to fly their fish flag on Somerset Street West.

Kudos to them for offering fish and seafood dishes that arouse both curiosity and hunger, even when the sharpest of diners may have a guest who thinks they’ve gone too far.

So, what about that tuna bone marrow?

I like tuna and I like beef marrow. But I didn’t leave LPB because I had developed a taste for tuna bone marrow, which I’ve since learned is also known as tuna back jelly.

One internet source says that tuna jelly “when it’s fresh…tastes like fresh seawater. It’s incredibly refreshing.” We missed that revelation. Instead, the allure of tuna back jelly went over my head and my dining companion even compared it to a slightly fishy Jell-O shot. Clearly we still have a lot to learn.

Of course, LPB’s website doesn’t say the food will confuse you. “We strive to create food that is fresh and memorable, refined yet unpretentious, comforting and full of heart,” it says. “The main thing is tasty.”

So, if the overwhelming sensation of tuna back jelly isn’t for you, more conventional and tasty choices abound.

East coast oysters ($42 for a dozen) were pristine and salty, with not only the usual shaved horseradish and mignonette on hand, but a squeeze of spicy, homemade chermoula to garnish those delicious clams.

The Le Poisson Bleu ($15) fritters were fried concoctions of smoked trout and potato that were hard to stop eating, especially with a hearty romesco-esque seasoning that confirmed Alex Bimm’s penchant for big flavors.

Pieces of Virginia rock shrimp ($24), studded with crispy discs of trout “chorizo” and served on beds of loose, jalapeño-tinged polenta, were as sweet as that crustacean obscure.

From Fogo Island came the most tender, meaty squid ($24) I’ve ever had. The dish’s lively pool of spicy chimichurri vie for dominance of the taste buds.

Fresh mussels ($16 for half a pound) steamed in a homemade XO sauce (a Hong Kong condiment made with dried scallops and shrimp) were all about the umami.

Along with tuna jelly, our charcuterie platter ($70) included (in order of ingenuity) slices of smoked albacore tuna loin, summer trout sausage with pistachio, and pistachio-spotted cod tongue “mortadella.” They all had a lot of salt-forward flavor and pleasant textures.

Of the five entrees, the unanimous favorite was a perfectly cooked, aged king salmon fillet ($38) with sautéed mushrooms in a simple yet irresistible sauce of emulsified house-made butter.

Something to wrap our heads (and purses) around was Le Poisson Bleu’s play on steak frites, which was swapped for a large, dry-aged piece of striped sea bass ($76 for an 11-ounce steak). The imposing steak, topped with dollops of that invigorating chimichurri, had concentrated flavor and textural complexity. The chips went from good to better as they sought out the delectable pan juices from the fish.

A whole local John Dory ($32), with butterflies and breading, didn’t work for us because the shrimp hollandaise sauce, which worked with the dish’s asparagus, took over when applied to the mild fish.

Also the decision to leave some scales on the fish for the crunchiness hinted at on the menu was debatable, especially when breading already made the fish crunchy. For example, I inadvertently removed bits of scales from my mouth instead of grinding through them.

While two desserts — a mille-feuille ($12) alternating puff pastry and chocolate pastry cream and a fig pavlova ($12) with lemon curd and rosemary-pinenut praline — were tasty, they both felt textured, too dense and almost unyielding. enough.

Fig pavlova in Le Poisson Bleu. As I’ve said about other restaurants, the money here for desserts is better spent on drinks.

Velour, a veteran of Montreal’s cocktail scene in charge of an attractive bar in the middle of Le Poisson Bleu’s dining room, makes some pretty artsy drinks. Two bourbon-based and two gin-based concoctions were balanced winners that were worth ordering again.

In terms of wine, the restaurant offers a small selection of affordable and often organic bottles from small producers, and some glasses are also available.

While we clearly liked some dishes more than others, Le Poisson Bleu still feels like a new restaurant. Provided you accept the fundamental premise that first-class and even avant-garde seafood should be celebrated in a relaxed environment, you will find countless refined delights. Just hold the tuna back jelly, if you prefer.