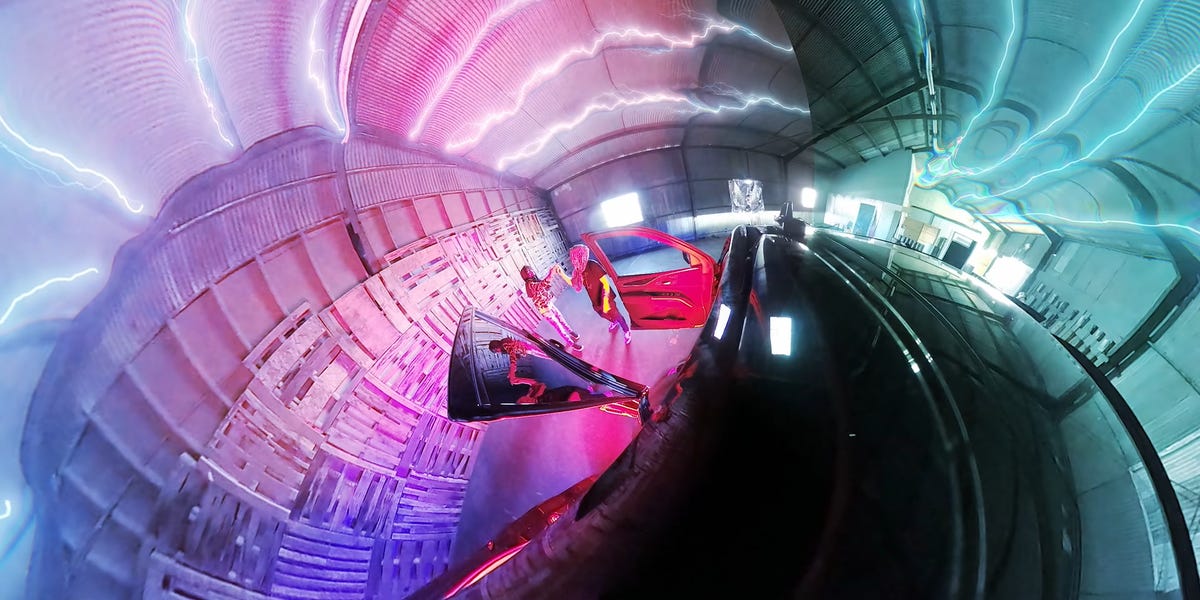 Hit play on any DotComNirvan music video and get ready for a shock. Rappers teleport and tap dance across car roofs until they dissolve into flashes of light. Neon-lit dancers spin against flashy backdrops. The camera jerks like a faulty faucet spiraling out of control.

“I love them all, they’re my babies,” DotComNirvan, whose real name is Nirvan Sorooshian, told Insider about his videos, which have reached 39 million views and 140,000 subscribers on YouTube.

The 25-year-old has worked with a variety of artists, from Summrs and Autumn! who make plugg (a style of dreamy hip-hop popular online) and “rage beat” rap that uses menacing synthesizers, to the teens midwxst and Glaive, who emerged from digicore, an internet-based scene known for emo lyrics and experimental pop and rapping. He has also collaborated with Yeat and Trippie Redd, who started out on SoundCloud but have since moved into the mainstream.

Sorooshian started out making a fan video for a rapper and has since become a go-to source for underground internet-boosted musicians looking to add graphics to their songs. He helps artists grow up and become a mainstay of YouTube’s indie music video scene.

“There is such a wealth of talent in the underground that has not yet been tapped,” he said. “I want to help put that more on the map.”

Sorooshian made his first video in 2016 as a fan

Towards the end of 2016, when Sorooshian was 19, he decided he wanted to get involved in internet rap somehow. It’s a scene where artists usually blow up via TikTok or SoundCloud, an open platform that allows users to self-publish music. It extends to YouTube and Instagram, where users share video clips and promote collaborations. In addition to musicians and videographers, internet rap has illustrators, executives, blogger critics, and meme makers. It’s hard to get noticed in this world, but niches abound.

Sorooshian already had experience editing skits for the high school news bulletin, he told Insider, and was inspired by Cole Bennett, who is still one of the most subscribed independent creators on YouTube, to try to make a rap video. At the time, he didn’t have a day job and was studying full-time, he said.

“I stopped going to class to work on this one animated video,” he recalls, saying he decided to make it for “All The Time 2,” a song by Florida rapper Wintertime, who started on SoundCloud.

He sent the fan video to the artist’s management on a whim, without expecting anything, he said, and woke up to an email saying they would post it as a video on Wintertime’s YouTube channel. The clip featuring a cartoon version of the rapper bragging about pixelated GameBoy landscapes took off and now has 12 million views.

In September 2017, Sorooshian started uploading official videos he made with emerging rappers to his own channel and gradually gained fans. At first he said he made them for free, and only started making artists pay when he became more established.

When he started making videos full-time, he said it took a lot of persuasion for his parents. “I’m from the Middle East, so school and a solid job were always the expectation,” he said. “Now they love it and are super proud of me.”

Sorooshian’s profile is rising in the YouTube music scene

While the current YouTube music video scene is “thin,” he said, there are a few key figures, most notably Bennett, who has more than 19 million subscribers with his channel Lyrical Lemonade. There are also many pages devoted to “premiere videos,” Sorooshian said, where people submit already completed videos and hope they get featured.

What sets him apart from Bennett, he said, is that Bennett “has more of a traditional storytelling aspect to his videos,” while Sorooshian’s videos are plotless, aiming to capture the sound of the song.

After personally shooting, Sorooshian said, he spends 12 to 16 hours a day editing a video with Adobe Premiere Pro, sometimes until it collapses. “I fell asleep on my keyboard,” he said, and “got so sick I felt like I was going to throw up.”

When editing, he said a lot of it is “centered around the beat,” and how he links the song to visions in his brain. One of his biggest videos, Yeat’s “Turban”, has the rapper vibrating on a vehicle. The hypervisuals synchronize perfectly with Yeat’s screams and the booming synths.

“The thing with Yeat is you have to go fast, he’s trying to get on with the next thing in his day,” Sorooshian said of the shoot. “We pulled his big body into this warehouse and we just had fun.”

Of all the rappers he’s worked with, Sorooshian pointed to Jace Salter, or Iayze (pronounced “Jace”), as someone whose profile he helped raise the most. In the past six months, Salter has risen to internet fame thanks to the TikTok hit “556 (Green Tip)”.

Sorooshian has created two videos for Salter, one of which has more YouTube streams than the actual song on Spotify, while the other has over 1 million views.

It’s “just a bunch of us kids connecting and making something out of nothing,” he said. “I think that’s so cool because it’s pure, and I feel really lucky to be a part of it and be a big player in the game.”