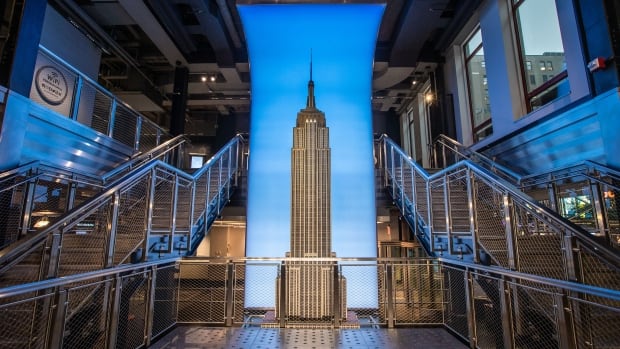 Our planet is changing. So is our journalism. This story is part of a CBC News initiative titled “Our Changing Planet” to show and explain the effects of climate change. Stay up to date with the latest news on our Climate and Environment page.

To understand the carbon footprint of cities around the world, all you need to do is look at their skylines.

While industry and transportation have long been labeled major culprits for carbon, some environmental advocates are trying to raise awareness about another troubling source, especially in densely populated urban areas: buildings, the multi-level structures that fill many cities.

The amount of energy required to light, cool, heat and ventilate them can be a large part of a city’s CO2 emissions. According to a UN report, buildings around the world were responsible for 37 percent of energy-related CO2 emissions in 2020.

The event took place on the 80th floor, overlooking the sea of ​​buildings in New York City, exactly the problem Hochul was talking about. More importantly, though, it happened in the Empire State Building, which managed an ambitious feat: converting a 1930s building into one of the most energy-efficient in the world.

Goal to be climate neutral by 2030

After ten years of implementation, the ambitious renovation of the Empire State reached a major milestone last year, reducing CO2 emissions by more than 50 percent. By 2030, the goal is to be carbon neutral, Dana Schneider, the director of energy and sustainability at the Empire State Realty Trust, said in a press release.

The company is now releasing the Empire Building Playbook: An Owner’s Guide to Low Carbon Retrofits, filled with all the lessons learned from the past 10 years and their plans for the future.

“We’ve done something in every part of this building to make it perform better,” said Schneider.

From the outside, the Empire State Building may still look like it did in the 1930s, when it was groundbreaking for its height and Art Deco design. But it now runs in a way that would probably be unrecognizable to the original builders.

Take the triple glazing, with krypton and argon molecules injected into the air gap, for extra insulation. The building’s 6,514 windows have all been upgraded. Heat loss in the winter months and heat gain in the summer are a huge problem for older windows that can drain a building’s cooling and heating system.

“We reused 96 percent of the original glass and frames, and we did that in a window factory we built on the fifth floor. Nothing came out of the building,” says Malkin.

That project was completed in 2010.

In 2019, the building completed the world’s largest elevator modernization project. All 68 elevators have regenerative braking systems. Not only do the elevators use less power to run, they also generate power when they go up and down, to power other systems in the building.

In the basement there is another important retrofit, the cooling installation, the centralized system that cools the air for a building. At first glance, Empire State’s refrigeration rig may look like it did in the 1950s, but the software it runs on now will tell you otherwise.

“So we took all the guts out, recycled all the metal, and built new guts for the chillers on site,” said Schneider, who gave CBC News a tour of the building’s essential energy-saving upgrades.

The new system can collect data and be programmed to cool the building’s 300,000 meters of space with optimum efficiency.

‘Not enough if we only succeed in the Empire State Building’

“Everything we’ve learned here is being given away because it’s not enough if we just succeed at the Empire State Building,” Schneider said.

That’s the point of the roadmap, co-developed by the New York State Research and Development Authority (NYSERDA), the agency spearheading the state’s efforts to cut greenhouse gas emissions by 85 percent by 2050.

The playbook, available to everyone online, features dozens of measures already used by the Empire State Building, plus hundreds of new ideas to support large-scale building renovations, including modernization of the electrical grid.

“We work with the 10 largest real estate companies in New York State, who own more than 700 major buildings,” said Janet Josef, senior executive at NYSERDA.

Josef said the partnership has resulted in a commitment from owners to decarbonise more than 50 million square meters of their existing buildings within the next decade. State leaders hope their push will deliver an expected $20 billion economic impact and 100,000 jobs if all buildings in New York follow the roadmap.

“I say welcome to New York’s energy future and as New York goes, so goes the country and the world,” Hochul said.

In Canada 100,000 large buildings have to be adapted

In Canada, Prime Minister Justin Trudeau has called for a zero-emission building code by the end of 2024.

The Canada Green Building Council estimates that about 100,000 major buildings will need to be upgraded to help the country reduce its carbon footprint.

“The average Canadian probably doesn’t know that buildings are a huge contributor to carbon emissions in this country,” said Thomas Mueller, CEO of the Canada Green Building Council. “They’re focusing on industry, they’re focusing on cars. The fact is, we need action in all three areas.”

Some of that action is already legislated in New York. In 2019, the city passed a law requiring large buildings to reduce their CO2 emissions by 2024, becoming the first municipality in the world to pass such a law.

VIEW | Vancouver is reducing the amount of fossil fuels used to heat buildings:

The city of Vancouver joins a North American effort to reduce the amount of fossil fuels used to heat buildings by making zero-emission energy sources a policy for new low-rise housing. 2:12

Mueller says political will is important, but so is private sector support.

“I want the 25 major commercial property owners in Canada to commit to decarbonising their entire building stock over the next 30 years,” he said.

For the group that gathered on the top floor of the Empire State Building a day before Earth Day, the hope is that the script will reach far beyond New York and empower global advocates like Mueller.

“You have the playbook, you have no excuses and you have a history waiting for your actions here today,” Hochul said.