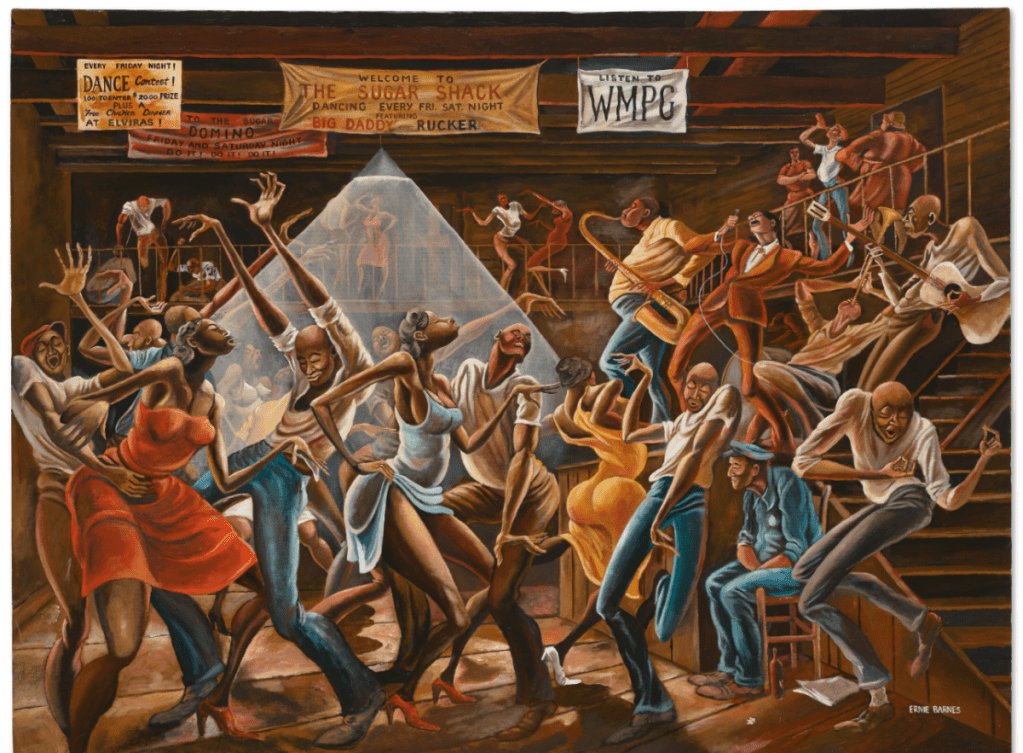 On Thursday evening, Christie’s closed out May’s sales week with a blockbuster night of back-to-back auctions. A sale devoted to impressionist and modern works from the collection of the late New York philanthropist and socialite Anne Bass was followed by another devoted to 20th-century art. Together, the two sales brought in a whopping $831 million in buyer fees.

Christie’s global head of impressionist and modern art, Adrien Meyer, took to the auction stage to welcome another packed house of spectators. First, there were the works previously owned by Bass, who amassed her wealth during her marriage and subsequent divorce from Texas oil magnate Sid Bass. Twelve works from her collection — including works by Edgar Degas, Claude Monet and Mark Rothko — grossed $363 million, well above the $250 million presale forecast. All works for sale have been sold.

The works that impressed most in the sale that followed may not have been rated as highly as the works previously owned by Bass, though they garnered significant bidding wars and prices far higher than expected. 20th-century art sales set records for Emmanuel Leutze, Howardena Pindell, Grace Hartigan, and Blinky Palermo. In particular, it was a painting by Ernie Barnes that grabbed attention and performed dramatically.

The bulk of Bass’ total sales came from two paintings by Mark Rothko that once hung on adjacent walls in Bass’s New York apartment. Both were backed by financial guarantees. Despite accounting for $116 million of the total sales, and despite being one of the most expensive works of the evening, they still managed to perform below expectations.

The first Rothko to be offered, Untitled (Red Shades)), from 1961, hammered in on a $58 million offer, went to a bidder on the phone with Christie’s New York Impressionist specialist Max Carter. It fell short of its low estimate of $60 million. The other, No. 1, an orange and pink abstraction (1962), failed to enthuse bidders and hammered in at $43 million, below the $45 million estimate.

One of the other highlights of the Bass sale was a 1927 version of Degas’ famous sculpture of a young dancer that was valued at $20 million. It far exceeded that expectation by making a $36 million bid, generating applause and going to a telephone bidder with New York contemporary art specialist Ana Maria Celis. It sold for a final price of $41 million with buyer’s fees.

One of the three Monets to hit the block during the night’s first leg was Parliament, setting sun (1900-1903) A lavender colored view of the British Parliament building. It attracted five bidders and hammered in at $66 million, much higher than the low estimate of $40 million. The painting was sold for a final price of $75 million to a buyer on the phone to Jussi Pylkkänen, Christie’s European global president. A second Monet, the painting of the water lilies water lilies (1907), went for $56 million.

It was a rare interior scene from Dutch modernist Vilhelm Hammershøi drawing the liveliest bids early in the night.

After a lengthy sparring between two bidders, Stue (Interior with an oval mirror), 1900, hammered at $5 million, more than three times the estimate of $1.5 million. It went to a bidder on the phone with Shanghai-based specialist Tan Bo, who beat out a New York client with contemporary specialist Sara Friedlander. The final price was $6.3 million, a record for the artist and surpassing his previous auction milestone of $6.2 million achieved in 2017.

Following the success of the Bass sale, a 20th-century art auction raised $468 million. Paintings by Monet, van Gogh and other big names were auctioned here, but work by women artists and black artists, historically underrepresented on the auction block, stole the spotlight.

Van Gogh’s Fields near the Alpilles (1889), which the artist made while he was in a French asylum, made his auction debut here. It hammered with one bidder in the room for $45 million, beating another from Hong Kong after a minute-long bidding match. The painting went for a final price of $51.9 million and drew applause from the room — with Meyer, in a closing remark, calling the fight “a wonderful achievement.”

A few key museum divestments played a key role in tonight’s sale. The Metropolitan Museum of Art has said goodbye to Pablo Picasso’s Head of a woman (Fernande), an early bronze cast of a woman’s head from 1909, the proceeds of the sale of which go to the museum’s purchase fund for new works. Estimated at $30 million, the work eventually sold for a final price of $48.6 million, a US buyer winning it over three other bidders who liaised with specialists in New York and Hong Kong.

Another divestiture, this one from the Museum of Fine Arts Boston, became one of the more surprising flops of the sale. Georgia O’Keeffe’s 1937 painting A sunflower from Maggieestimated to bring in $6 million, failed to find a buyer.

A recently restored landscape by Claude Monet was among the highlights of the evening. It sold for $25.6 million and reached its high estimate. The proceeds of the sale were split between the heirs of the original owner Richard Semmel, who sold it under duress in the years leading up to World War II, and the current owners, a French family whose members have not revealed their identities. The two parties reached a legal settlement in March that resulted in the sale of the work.

It wasn’t until Barnes’ 1976 dancehall scene emerged that The sugar shack, an image used for the cover of Marvin Gaye’s album produced that year, started a bidding frenzy. In 2019, the California African American Museum (CAAM) organized a Barnes survey and since then there has been renewed interest in his work. After a heated bidding war between a New York bidder and another determined bidder in the room, the hammer price of the work climbed to unforeseen heights, sparking awe from the crowd.

On sale elsewhere, Grace Hartigan’s 1959 abstract canvas early November went for $1.3 million, just below the high estimate of $1.2 million. The award set a record for the artist, surpassing the $687,500 earned at Christie’s in 2021 for her 1961 canvas The Phoenix.

Hartigan’s record is one of many that the post-war female painters have achieved in recent auction seasons. The momentum comes as homes look to bring influential women to the retail space who are underrecognized compared to their historic male counterparts.