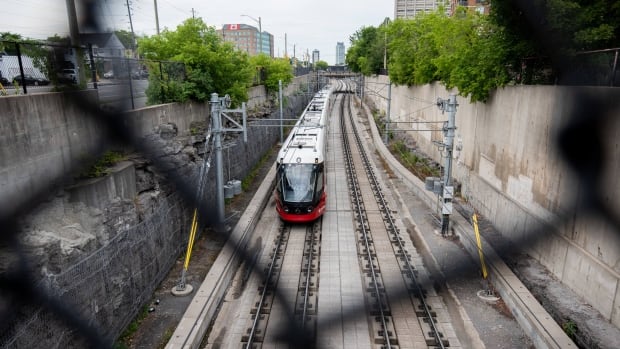 Getting through Ottawa may require some diversion in mid-August as maintenance shutdowns are planned for both the LRT’s Confederation Line and a portion of downtown Highway 417.

For about two weeks beginning Aug. 12, sections of the LRT will close in the evening while the Rideau Transit Group performs what the city calls “proactive track and maintenance work” on the line.

OC Transpo says work could begin as early as 8pm on some evenings and is expected to finish on August 25.

The amended schedule will be finalized later this week and will be shared via social media and signage at stations, a Tuesday memo to city council said.

In the memo, Renée Amilcar, the general manager of transit operations, said this year’s work focuses on grinding and profiling rails, which she says will provide a more comfortable ride for customers.

“Each light rail system requires regular annual proactive maintenance to ensure the long-term durability and reliability of the system,” she wrote.

The track will also be inspected and repaired if necessary and the point heaters calibrated to prepare for winter.

During the two weeks, the sections that are not being worked on will remain open to customers and replacement R1 buses will cover service between the closed stops, the memo said.

The service starts every morning at the standard time: on weekdays at 5 a.m., on Saturdays at 6 a.m. and on Sundays at 8 a.m.

Amilcar said the work will be done in August, while passenger numbers tend to be lower.

The maintenance shutdowns come just days after the line returned to service after a lightning strike damaged a section in the last week of July and had to close sections of the line.

Booth Street Bridge is being replaced to close section 417

The Ontario Department of Transportation has scheduled the demolition and reconstruction of the Booth Street Bridge for mid-August.

417 Rapid replacement of the stand bridge will take place from 11-15 August by MTO. 417 complete closures, both east and west. #otttraffic #Ottnews #Ottawa pic.twitter.com/5MmBggZehu

The middle section of the highway will be closed in both directions from August 11 at 8:00 pm to August 15 at 6:00 am

Booth Street, already closed from Normand Street to Arlington Street, including to cyclists and pedestrians, is expected to reopen on August 25.