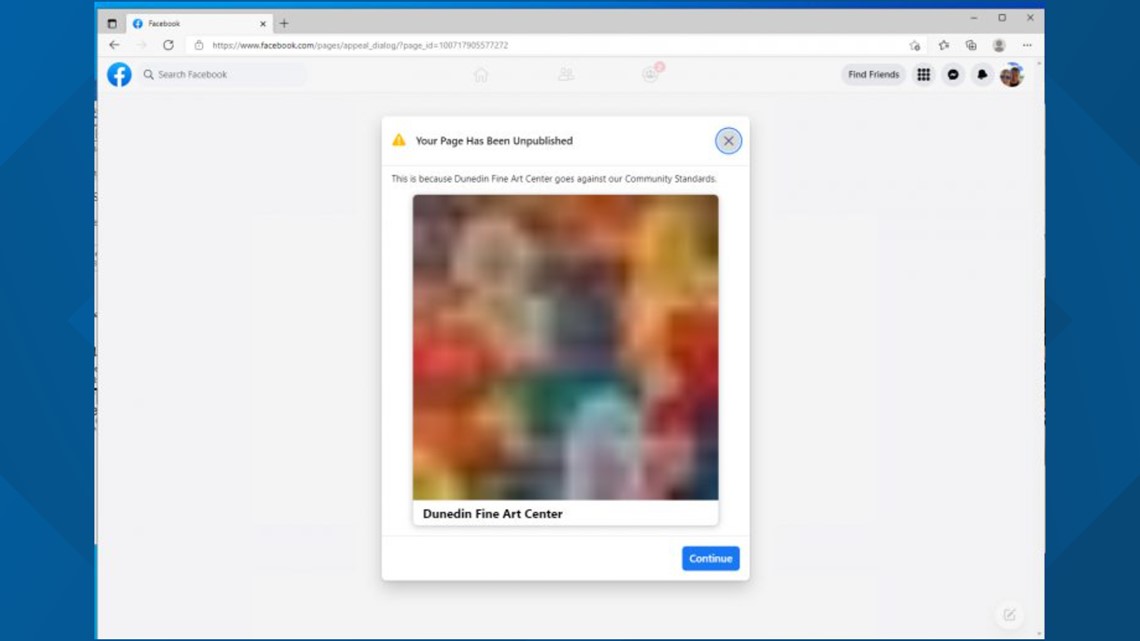 For a year now, the Dunedin Fine Art Center says it has been in “Facebook Jail” without appearing to be released.

“This week marks one year since a 46-year-old cultural institution in Pinellas County came across the buzz-saw of the algorithm-driven killer of a social media giant,” said Ken Hannon, vice president and COO of the company. arts center. , wrote in a striking press release about the bizarre situation.

The ordeal began on April 20, 2021, when Hannon posted a Facebook message to the arts center’s account. It was an attempt to celebrate the artwork of a group of students and members.

The photos shown here highlighted award-winning work – using every medium from wood to acrylic. Among them was an artist’s third-place photo, which showed the breast of a nude female model.

Within a minute, the arts center says it was hit by an apparently automated notification that it violated Facebook’s community standards. Moments after Hannon clicked the button to begin the review process, the arts center’s official business page and Hannon’s personal page were both disabled.

The arts center does not think its post violates community standards, saying it believes the images should be allowed under Part III. Section 14 of the Facebook standards that “allows photos of paintings, sculptures and other art featuring naked figures.”

In this case, what was posted was a photo of a piece of art that actually depicted a nude figure. For Hannon and his team, this situation seemed very simple.

“We are not in the business of creating panic and chaos on social media,” Hannon told 10 Tampa Bay, explaining that his organization only wants to promote art and a sense of community.

However, Hannon says that every attempt to contact Facebook to get the account back has been unsuccessful. So the center decided to try and launch a new page.

That didn’t work. It was not published.

“More than 30 days have passed since your account was disabled, so this decision cannot be reconsidered,” Facebook wrote in a follow-up message that appeared to indicate that none of the arts center’s accounts would be coming back.

For the fine arts center, Facebook was the primary marketing platform. With 12,500 followers before the primary page closed, the organization would use the platform for everything from organic posts to paid advertising.

“We searched for phone numbers, searched everything, including online groups,” Hannon said of his efforts to find a contact at Facebook who could recover the account — his marketing tool.

Members of the organization, who had relied on its Facebook page for information, were confused and unable to send messages to the arts center through the platform.

Like other organizations hit by the pandemic, Hannon and his team didn’t need the added pain of losing Facebook.

“We’re definitely not growing at the same pace we were,” he told 10 Tampa Bay.

The Dunedin Fine Art Center has continued to try to restore its page, even as months dragged on with no message from Facebook.

Hannon says the center has filed a complaint with the Better Business Bureau, encouraging friends with commercial Facebook accounts to contact the social network’s representatives on their behalf. Still nothing.

10 Tampa Bay reached out to Facebook’s press team on Friday. We’ll update this story if we hear anything.

In the meantime, the arts center is focused on providing the best possible experience for the 7,000 students it serves each year. Its main mission is education, with 21 studio classrooms teaching everything from woodcarving to steelwork and traditional painting. The age of the students ranged from 4 to 97 years. And every summer, the organization offers a large summer academy program.