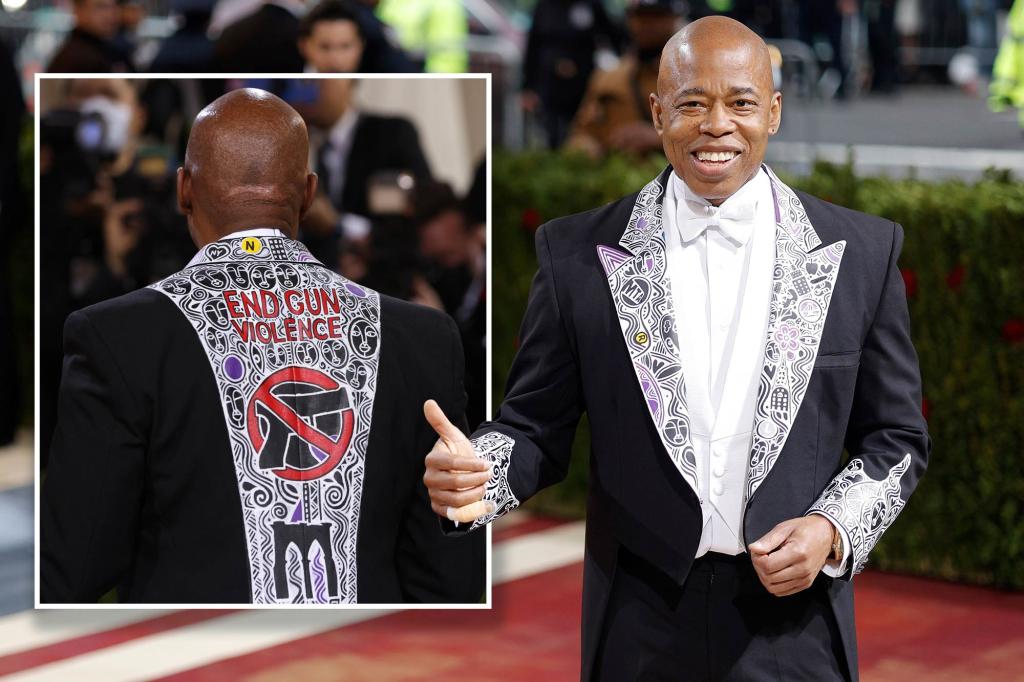 On Monday, Mayor Eric Adams stunned at the Met Gala in a custom tuxedo that handily balanced glory and pathos. On his lapel were images of the Brooklyn Bridge and other Big Apple icons – as well as symbols, painted by a Nigerian artist, depicting murdered young children and a plea to “end gun violence.”

The boldly chosen mixed messages disturbed some onlookers who were easily taken aback, but they proclaimed Adams’ holistic embrace of his role. It said, “I am the mayor of all the city, its greatness and its misery, and I will not let the other deny or deny it.”

Difficult times call for inspiring leaders. Adams can’t be Volodymyr Zelensky, but we need a mayor who smiles and celebrates the city’s treasures without denying its crime, homelessness, and economic pain.

What’s more, after two years of too many of us wearing sweatpants and t-shirts during the COVID pandemic, our mayor’s glowing style has made it fun to dress again.

Adams rocks $2,000 suits by custom tailor Victor Mohan. His pin collars unabashedly, with a wink, evoke Gordon Gekko and the era of Wall Street excesses. While his abhorrent predecessor, Bill de Blasio, wore generic Rothmans suits, monotonous plain shirts and conservative-patterned ties, we finally have a leader who dresses like the city is beginning to feel.

In March, Adams attended the first Ralph Lauren show since 2019 wearing a striking jacket, half of which was decorated with bright art featuring the Chrysler Building, street signs and his name in capital letters. On Instagram, he stated: “Strike a pose! Incredible night at @themuseumofmodernart to celebrate @RalphLauren’s groundbreaking work and send a clear message: #NYCisBack!”

New York is indeed back. Adams proves it by hanging out with supermodels like Naomi Campbell at private club Zero Bond. In March, he celebrated the end of the mask mandate on stage at the Blue Note jazz club wearing a sharp burgundy jacket and delivering an inspiring, straight-forward speech: “I’m here tonight to say to you, while you enjoy the Blue Note, let’s strike a chord as we move forward in the years to come.” In April, he attended the opening of the Brooklyn Chop House restaurant in Times Square, dressed in a sharp black suit while mingling with none other than Mary J. Blige.

It’s not just about clothes. Adams’ personal dynamism is also impressive. A friend who heard him speak at a recent Carnegie Hall relaunch party for the right-wing newspaper, the New York Sun, marveled: “He was the only one who spoke without notes. And he stayed and mixed with everyone.”

A new poll shows a majority of New Yorkers disapprove of Adams’ criminal record. Not enough content to match his style? They should give him more time. Four months is not enough to undo years of criminal cloud clouding of legislative and judicial edicts. And murders, shootings and rapes were all in April.

Former Vogue editor-in-chief Diana Vreeland once said, “You see the approach of a revolution in clothing.” The mayor’s cheerful swagger clearly proclaims: our crises are legion, but so are our strengths. And maybe there’s a glittering revolution on the horizon for New York — and for all of us who live in it.