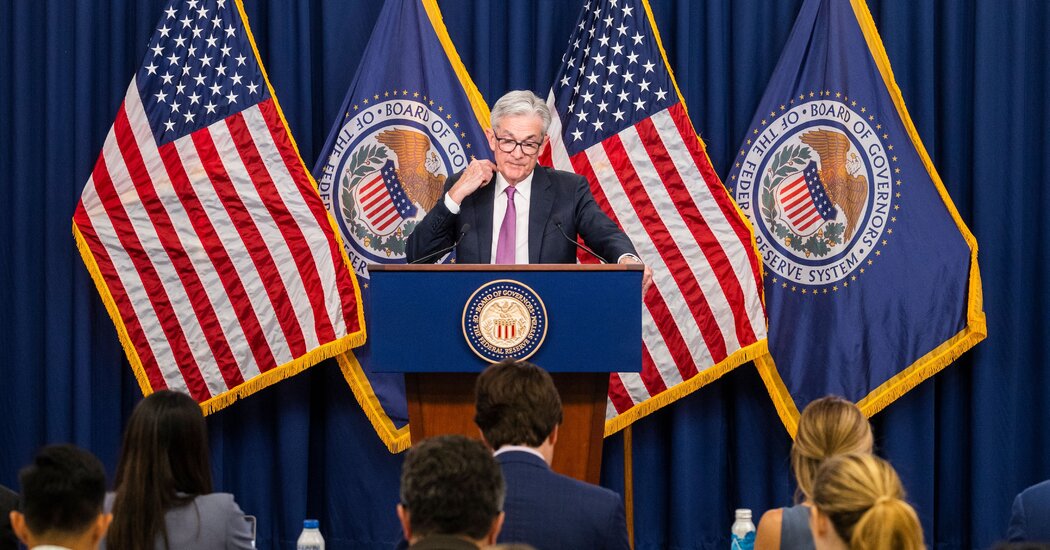 WASHINGTON — The Federal Reserve continued its campaign of rapid rate hikes on Wednesday, pushing up borrowing costs at the fastest pace in decades in a bid to control inflation.

Fed officials voted unanimously at their July meeting for the second super-large rate hike in a row — a three-quarter point move — and indicated that another major adjustment could be made at their next meeting in September, though that remains to be decided. Wednesday’s decision brings the Fed’s key rate within a range of 2.25 to 2.5 percent.

The central bank’s firm moves are designed to slow the economy by making it more expensive to borrow money to buy a home or expand a business, putting pressure on the housing market and economic activity in general. Jerome H. Powell, the Fed chairman, said in a news conference after the meeting that such a cooling was necessary to allow supply to catch up with demand so that inflation could moderate.

Mr Powell acknowledged that the Fed’s policy changes were likely to cause some economic pain, most notably a weakening of the labor market. That has made the central bank’s rate hikes unwelcome to some Democrats, who argue that squashing the economy is a crude way to lower current inflation. But the Fed chairman stressed that today’s economic sacrifice was necessary to put America back on a longer-term sustainable path with slow and predictable price increases.

“We need to slow growth,” said Mr Powell. “We don’t want this to get any bigger than it needs to be, but ultimately, if you think about the medium to longer term, price stability is what makes the whole economy work.”

Shares rose following the Fed’s decision and Mr Powell’s press conference. Some interest rate strategists have asked why, because Mr. Powell’s comments matched the message Fed officials have consistently sent: Inflation is too high, the central bank is determined to destroy it, and interest rates are likely to rise further this year.

“There is a lot of information between now and the September meeting, and I think the markets will reassess it,” said Priya Misra, head of Global Rates Strategy at TD Securities. “This is an even more data-dependent Fed – and it will come down to whether inflation gives them room to slow down.”

The Fed started raising interest rates from near zero in March, and since then policymakers have picked up the pace sharply in response to incoming economic data as price increases have continued to accelerate at an alarming rate.

After a quarter-point move to start, the central bank raised interest rates by half a point in May and three-quarters point in June, which was the biggest move since 1994. Officials could continue to raise interest rates briskly in September, or they could. could slow the pace depending on how the economy evolves.

“We could do another unusually large rate hike,” Mr Powell said on Wednesday. “But that’s not a decision we made at all.”

What the Fed’s rate hikes mean for you?

A toll on borrowers. The Federal Reserve has raised the federal funds rate, its main interest rate, in an effort to curb inflation. By raising interest rates, which is what banks charge each other for overnight loans, the Fed creates a ripple effect. Directly or indirectly, a number of borrowing costs for consumers will increase.

mortgages. Mortgage rates don’t move in sync with federal fund rates, but track the 10-year Treasury yield, which is affected by inflation and how investors expect the Fed to respond to rising prices. According to Freddie Mac, rates on 30-year fixed-rate mortgages have risen above 5 percent this year, from nearly 3 percent for most of 2021.

banks. An increase in the Fed benchmark rate often means that banks will pay more interest on deposits. Larger banks are less likely to pay consumers more, and online banks have already started raising some of their fees.

Mr Powell said the likely path in interest rates outlined by the Fed earlier this year — with rates rising to about 3.5 percent this year — remains reasonable. The Fed is likely to raise borrowing costs to “at least a moderately restrictive level,” at which they more actively tax the economy, he said.

But the mere acknowledgment that growth is crunching and that rate hikes will eventually slow down was enough to appease investors. The S&P 500 stock index ended the day at 2.6 percent and the Nasdaq Composite posted its best day since April 2020. However, markets can change tone quickly. The last two times the Fed raised rates, the S&P 500 rose on the day of the announcement, only to fall the day after.

“At some point it will be appropriate to slow down,” said Mr. powell. “We’re going to be guided by the data.”

For now, the data – at least when it comes to inflation – remains worrying.

Consumer prices rose 9.1 percent in the year to June, with costs rising rapidly for a range of goods and services from food and fuel to rent and dry cleaning.

The Fed will receive a new reading of its favorite inflation measure on Friday, the Personal Consumption Expenditure Index. That report likely confirms the more timely consumer price index signal: Inflation was extremely fast in June, rising at the fastest pace in decades.

Inflation is likely to ease somewhat in July, as gas prices have fallen sharply this month. Still, officials will be watching closely in the coming months for signs of a broad and ongoing price decline.

The Fed is the country’s main response to inflation, but the White House is also trying to help where it can.

The latest central bank raise came on a day when Democrats appeared to reach agreement in the Senate on a bill designed to lower the price of prescription drugs and low-emission electricity, while also cutting the federal deficit — a President Biden called “a bill to fight inflation and lower costs for American families.”

Still, central bankers are nervous that, after more than a year of rapid cost changes, Americans could expect inflation to continue if it isn’t lowered soon.

If people and companies begin to adjust their behavior in anticipation of rising prices – with workers demanding higher wages and companies passing on their rising costs and expenses to customers – inflation could become a more permanent feature of the economy.

As inflation ingrained in the 1980s, the Fed tried to overcome it, eventually raising interest rates to double digits and triggering successive recessions that pushed the unemployment rate above 10 percent. The 2022 Fed doesn’t want a repeat.

“Doing too little and leaving the economy with this entrenched inflation will only increase costs,” Mr Powell said Wednesday.

It is not only the United States that is campaigning against rapid price increases. Inflation has accelerated around the world as the pandemic has disrupted supply chains and Russia’s war in Ukraine disrupts fuel and food markets. Many central banks are raising interest rates to slow down their own economies, hoping to bring prices back under control.

In the United States, growth is already showing signs of weakening as Fed measures begin to bite and inflation itself weighs on households’ wallets. The housing market is cooling off quickly as high mortgage rates deter potential buyers and discourage builders from starting new homes. Some measures of consumer spending also point to a slowdown: Walmart said this week that inflation pressured consumers to buy fewer goods. Consumer confidence is on the decline and many economists are beginning to predict at least a mild recession.

Mr. Powell was clear that while he sees some signs of cooling, he doesn’t think America is in a recession yet.

“I don’t think the US economy is likely to be in recession right now,” said Mr. powell.

That’s partly because the labor market remains strong, with unemployment at 3.6 percent – almost its lowest level in 50 years. New data released on Friday is expected to show employment compensation rising rapidly, but not fast enough to keep up with today’s rapid inflation.

The Fed hoped that because the job market is off to such a strong start, it will be able to slow the economy down enough to lower inflation without hurting it so much as to trigger a wave of job losses. But central bankers have also stressed that achieving that outcome could be difficult.

“Our goal is to reduce inflation and achieve a so-called soft landing,” said Mr. powell. “That’s what we’re trying to achieve. I’ve said on many occasions that we understand it’s going to be quite a challenge, and it’s only gotten more challenging in recent months.”

The Fed chairman repeatedly echoed the idea that while the central bank’s response may be painful, rapid price increases are also punitive.

Low-income people “suffer,” he said, as they go to the supermarket and discover that their salary is not enough for the food they usually buy. “It’s a real shame and that’s why we’re really committed to reducing inflation.”