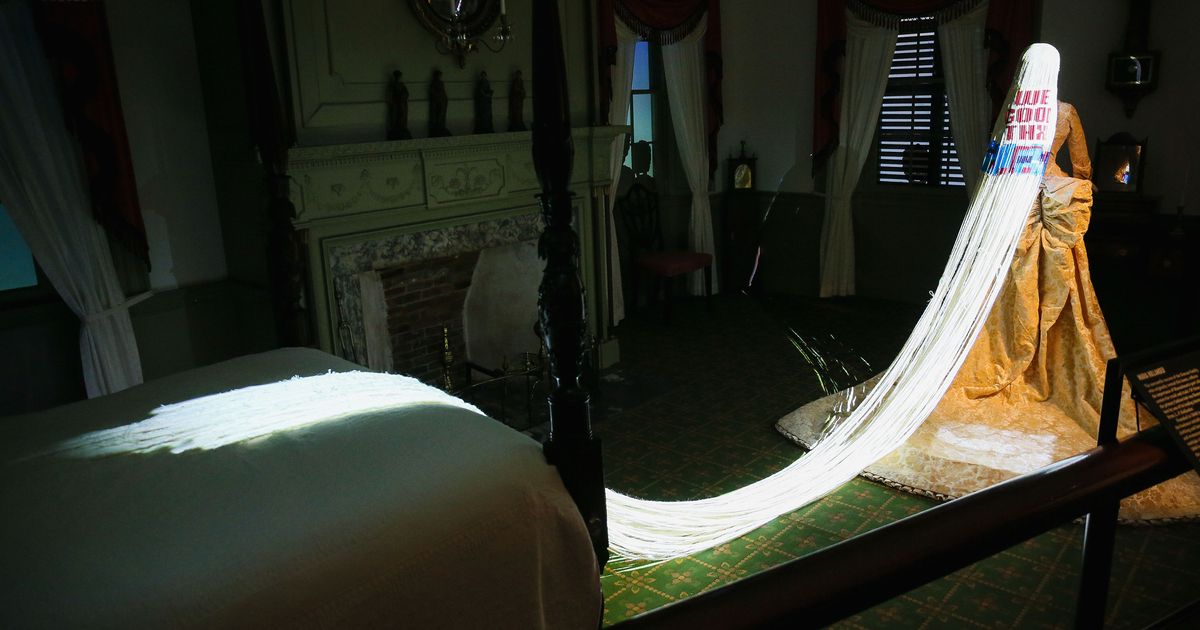 More than 198,000 visitors have walked through it In America: An Anthology of Fashion this summer at the Metropolitan Museum of Art. A challenging exploration of American fashion from the early 1800s to the late 1900s, the exhibit is primarily centered in the American wing of the museum as a series of “period rooms,” each with distinctly historic American decor. Most notably, for the first time in the Costume Institute’s hitherto homogeneous history, four black female artists – Radha Blank, Janicza Bravo, Regina King and Julie Dash – were asked to showcase their work.

The Met tapped a total of nine directors — including Martin Scorsese, Tom Ford, Sofia Coppola, Autumn de Wilde and Chloe Zhao — to create video vignettes that challenged or emphasized an era of fashion marked by colonialism, slavery and racism. And what the four black women have to reveal is remarkable.

Photo: Courtesy of the Metropolitan Museum of Art

All directors were asked to create fictional cinematic vignettes in the period rooms with the intention of bringing a new perspective on American fashion by working with historical garments from the institute’s extensive collection. Radha Blank’s installation, We good. Thank you! – a quilt-like headpiece made with African braiding and beading techniques – explores the power of work and the resilience of black women. Janicza Bravo shows video clips from the 1970s film the conformist and the movie from the thirties Ten minutes to live. Regina King enlisted Amanda Gorman and Steve Harris to read “& So” and “Call Us” from her collection of poetry Call us what we wear. Julie Dash highlights two black fashion icons by showing mannequins wearing dresses by couturiere Ann Lowe, as well as a fashion model made to look like actress Eartha Kitt. The exhibition is open until September 5. We chatted with Dash, Bravo and Blank. (We respectfully note that King was not available for interviews.)

Janicza Bravo chose to show video clips from the 1970s film The conformist.
Photo: Courtesy of the Metropolitan Museum of Art

What is your favorite childhood memory of the Met?

dash: My sixth grade took a bus to the Met. It had clean lines, was spacious. Lots of wonder there. I bought a postcard of a Rembrandt for my mother.

Bravo: My earliest memory is from high school: I was a teenager sitting there with a class. The earliest kind of memory around it is a fantasy of being able to sleep there, right? Can be there when no one is there. It was super surreal.

Blank: My mother made it a point to take us to museums – the Museum of Natural History, El Museo del Barrio, the Museum of the City of New York, the Guggenheim, the Met – these were all places in my childhood. At the Met, I remember being pulled a little by my mother and passing by these huge remnants of the past. And she would let me know that some of the pieces may have come from the indigenous people, which explains the origin of the artwork.

Julie Dash chose to show mannequins made to look like actress Eartha Kitt.
Photo: Courtesy of the Metropolitan Museum of Art

Considering it’s an American art institution – how would you describe yourself as American artists?

dash: I am an artist, an African American woman and a mother, who likes to challenge herself by starting a conversation. I like borrowing from the poets, engaging in a simple dialogue – using visual metaphors and visual rhetoric in ways that may be familiar, but not visualized that way before. I feel that as an American and filmmaker I always want to place my work in an international context. I want to be in conversation with the wider world, not just a narrow urban one.

Bravo: How would I describe myself as an artist? I don’t know I’ve ever had that.

Blank: I am an artist and I am American. Both identities are very intricately woven – strongly defined and influenced by my Blackness. I am a black person. I will always be black. I never want to transcend my race; my racial identity determines everything I do. And that’s not always good. I mean it informs an interaction with a taxi driver or getting a taxi in the first place. Always on your guard. Always alert. I don’t know if it always serves my sense of freedom, because I always have to walk in that and approach everything as a black.

Regina King enlisted Amanda Gorman and Steve Harris to read “& So” and “Call Us” from her collection of poetry Call us what we wear in the Richmond room, pictured here.
Photo: Courtesy of The Metropolitan Museum of Art, Matteo Prandoni/BFA.com

Virgil Abloh once said, “Everything I do is for the 17-year-old version of myself.” Which I think about a lot. How would you describe your installations to young people of color?

dash: To be honest I didn’t know what they were talking about when they first called. I like to be challenged. The idea of ​​it was discouraging. With fashion designer Ann Lowe, I immediately saw an opportunity to not only celebrate and elevate her work, but also be a little subversive. If she was society’s best kept secret, why didn’t she get her flowers while she was alive?

Bravo: I approached the assignment as if I were making a film still. It was a moment in a moment in a movie. I thought about it like a movie still, like a scene, like a diorama. I’ve been doing work for that young me lately, work that 17-year-old wished she’d had the chance to see. Because it took me a long time to become a filmmaker for a myriad of reasons. I needed to see that someone else could imagine that. I’m really aware at this point that there’s probably someone else out there who needs that.

Blank: It’s about bringing black women’s voices back into the conversation about their own survival and freedom. Maria Hollander (the dress designer) was an abolitionist and a suffragette. It is very likely that a black woman helped sew her dresses. What kind of black woman could live in that time, survive that time? It was a kind of woman who sews dresses during the day or cleans white people’s houses and takes care of their children and at night casts some kind of survival and protection spells. The Obeah Woman. The black woman.

On the red carpet of the Met, I wore a ghostly red and white headscarf, inspired by Marie Laveau’s famous oil painting. I also wore a blue denim jacket inspired by the early denim makers: the indigo farmers of the south, the Geechee in the Gullah Islands. My hands were painted blue to represent them a bit. And then I wore a dress that was white, off-white, and cream in the spirit of the ancestral dress—the ceremonial dress of women in Brazil or here in America.

In the installation I made, the words “We Good, Thx!” are on a cotton headpiece that accompanies Hollander’s dress. That cotton will be the crown. It is a textile; our experience is structured. That is why at some point you see that the braids grow out of this fabric shape. I think of black women who braid hair. We make quilts every day. I knew I wanted the braids to speak to this quilt. Since it is braids, it is immediately a black woman because it is a signifier of a black woman. Hair braiding is survival.

Bravo’s work also included clips from the 1930s film Ten minutes to live playing in the neo-Gothic library.
Photo: Courtesy of the Metropolitan Museum of Art

What is the significance of the four black women in the exhibition?

Bravo: It was pretty radical to see there were nine directors on this show and we are all so different. It’s so exciting; it is real. You have nine directors, and four of them are black women? You know that never happens, right? When I saw Radha’s piece, my jaw dropped. I was like, Bravo. Just clap. If we were looking at some kind of lineage, if it wasn’t for Julie, I wouldn’t be in this room, Radha in this room, Regina in this room. And that… that felt very radical – because our work doesn’t exist in the same tone space.

Blank: Unless it’s an exclusively black film festival, it doesn’t happen that black filmmakers are curated or programmed together. This is historic and you couldn’t have a more diverse group of black women. And so it means a lot that these four very different voices and storytellers are together; nothing we do is comparable. But the fact that I get to share a room with Julie Dash? I don’t think anyone can guess what she means to me when it comes to a career as a young woman. The first time I could look at a black woman and say, “Oh, director – this is what it could look like,’ you know? When I saw Julie’s piece, I cried. I felt seen. And I didn’t know I had to see that. And for Regina King, the fact that she wanted more for herself as a storyteller means she’s helping to create more texture and color in the zeitgeist, in the landscape of storytelling. And we need her. We really need her.

dash: To be in a bigger conversation, each room offered something different. The rooms were there just before, but they were not alive.

Dash’s installation in the Renaissance Revival Room showcases the work of Black couturière Ann Lowe.
Photo: Courtesy of the Metropolitan Museum of Art

By submitting your email, you agree to our terms and conditions and privacy statement and you will receive email correspondence from us.